Since the beginning of 2019 sixteen archival catalogues have been added to Archives Hub. These have been a mixture of larger and smaller catalogues, and of institutional and personal papers,  and for several of these the work needed has been greatly aided by the help of interns and volunteers. This is certainly true for the two largest catalogues. The first to go online in 2019 was the catalogue for the Papers of Horace Geoffrey Quaritch Wales. His papers include many relating to his archaeological work in southeast Asia including expedition notes, personal notebooks, diaries, manuscript proofs, correspondence, newspaper cuttings and maps. Listed within this catalogue are objects and items of furniture which were also part of the bequest of Quaritch Wales after his wife’s death in 1994.

Horace Geoffrey Quaritch Wales worked for the Siamese government and from 1924-1928 was adviser to King Rama VI and King Rama VII. This led to the publication of Siamese State Ceremonies (1931), and Ancient Siamese Government and Administration (1934), this volume being translated into Thai in the same year. He married and with his wife, Dorothy, began extensive travel particularly in south and southeast Asia. During 1934-6 he served as field-director for the Greater India Research Committee, directing archaeological work on early Buddhist sites in Thailand. From 1937-1940 he and his wife undertook surveys and excavations in Malaya, particularly in the Kedah region. He published The Making of Greater India (1951) and continued to publish books, articles and reviews throughout his career. He died in 1981.

For this catalogue, I am grateful to two successive SOAS Alphawood interns who worked to organise and list all this material, ready for me to catalogue. My thanks go to Pawinna Phetluan and Praphaphan Chuenkaek for their work with this collection. The second large collection for which the catalogue has been completed this year is for the Papers of Edward William West, the Pahlavi scholar and Zoroastrianism expert. For this catalogue I must thank Aadityakrishna Sathish for his hard work in organising, listing and beginning the cataloguing, which I was able to complete at the end of last month.

West, in 1852, became the Chief Engineer on the Great Indian Peninsular Railway Project but from as early as 1850 he studied the Kanheri caves in Mumbai,  presenting his findings to the Bombay Asiatic Society on the 12 April 1860 which was then subsequently published in the January edition of the BRAS under the title, “Copies of Inscriptions from the Buddhist Cave-Temples of Kánheri, &c. in the Island of Sulsette, with a plan of the Kanheri caves” (West 1861). But beyond this West’s legacy remains in his translation of Zoroastrian texts from Pahlavi to English.

Three sets of institutional records have also been added to the catalogue, and for two of these, I also need to thank volunteers for their help. Yesterday, I completed the catalogue for the Royal Asiatic Society Governance: Minutes of Council Meetings. Most of these are contained within large bound volumes and I am grateful to Ian Scholey for his help with cleaning and listing these books. 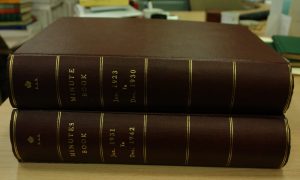 I also need to thank Thomas O’Connor for his help with preparing and beginning the cataloguing of Royal Asiatic Society Richard Burton Memorial Medal. This is one of those catalogues which is a joy to work on as you discover about a veritable list of who’s who among explorers, academics and mavericks. The medal was instituted  in 1921 when the Council of the RAS agreed to found a Richard Burton memorial lecture in commemoration, that year, of the 100th anniversary of Burton’s birth. A fund was established to finance the lecture and by 1923, £60 had been subscribed. It was decided in March 1923 that part of this would be used to fund the Burton Medal. This would be awarded to the person chosen to deliver the lecture, which was to deal with Burton, his travels or some suitable subject of exploration. The medal was designed in 1924 by Pinches, to be cast in silver and gilded. In practice those chosen to give the Burton lecture were expected to have undertaken exploration and research in the East, and more particularly in close association with local people, or in difficult circumstances. Here is the list of its recipients:

Sir Arnold Talbot Wilson turns up again – as I’ve catalogued a very small collection of his Papers, a notebook concerned with the publication of his Bibliography of Persia. In fact most of the rest of the catalogues are very small – containing maybe a single, or a few items. But getting these also on the catalogue can enable researchers to know that they are here and to perhaps provide a piece in their research jigsaw. I was reminded of this recently when a researcher came to see the Papers of David Lockhart Robertson Lorimer and Emily Overend Lorimer – a small set of just two archival folders which I catalogued towards the end of last year. But this researcher had been researching about the Lorimers for 40 years and didn’t know that we had these papers. He was delighted to be able to get to see them.

So what is represented in these small catalogues? Here is a list with their links, so you can go exploring…

In other news, we were delighted to week to host Dr Jharna Gourlay from the University of Lucknow for her lecture on “Forceps, Stethoscopes and Sisterhood: British Female Doctors in 19th Century India”. Dr Gourlay explained how these women, having few opportunities in England, went to India in order to put into practice the skills learnt in their medical education, They went as both missionaries or in a secular context. Dr Gourlay explained that many however worked not only within medicine but also on the broader issues of women’s empowerment, citing examples of how they looked to encourage women to stand against early forced marriage and enabling them to gain education.

Next Thursday, 14th March, Dr. Yossef Rapoport (Queen Mary, University of  London)  will lecture to launch the publication of “Lost Maps of the Caliphs: Drawing the World in Eleventh-Century Cairo” by Yossef Rapoport and Emilie Savage-Smith. And on Tuesday 19th March, Ursula Sims-Williams (British Library) will lecture on “Tipu Sultan’s Library: Building a Collection”. Both events commence at 6.30 pm and we hope many of you will be able to join us.