Sometimes, as a break from the large projects I am working on, I tackle some of our more individual items. Having just completed the catalogue for the Richard Burton Memorial Medal, I had a hunt through some of our Special Collections boxes and came across “Contents of the History of the Prithee Raja”, a handwritten manuscript which has been labelled as “Presented by Major Caulfield, Nov 3 1827” (note the spelling!) This had been listed in our Catalogue for English Manuscripts where I discovered it is described as:

“Contents of the History of  Prithirājā; with the translation of a chapter as a specimen. Communicated by Lieut. Colonel James Caulfield (spelling again) of the Bengal Cavalry, M.R.A.S.” and further says, “In the year 1827, Colonel Caulfield (spelling and increasing rank!) presented to the Society a very fine MS copy of the Poems of Chand, “the Homer of the Rajputs” containing the History of the Wars and Exploits of the chivalric sovereign,  Prithirājā; and  at the same time in order to give an idea of the style and matter of the work he forwarded this translation of one book; to which is added, a sketch of the contents of all the chapters. At the end is an enumeration of thirty-two sciences, which none but the most famed for wisdom are supposed to be masters of, which  Prithirājā is said to have been thoroughly acquainted with.”

The donation of the manuscript and of these papers are also recorded in the “Donations Register, 1823-1827”, p.94, and also in the General Meeting Minutes for that date found in the “Minutes of the General Meetings, January 1827-March 1830”, p.35, again with the name being recorded as Major James Caulfield.

You’ll be pleased to hear that we also still have the manuscript that was donated. It is catalogued as TOD 120 and om the inside cover this is what I discovered: 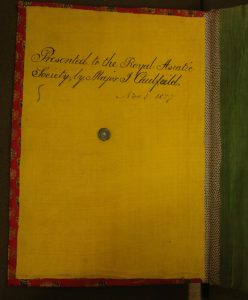 Here, the name is recorded as Major J. Caulfeild. So which is correct? And who was he? I found Caulfeild to be the correct spelling. James Caulfeild was born in 1782, the son of John Caulfeild, Archdeacon of Kilmore and great-grandson of William Caulfeild, 1st Viscount Charlemont. He joined the Bengal Army in 1798, arriving in India in 1799. Apart from a period of sick leave in England from 1807-1812, he served in the military until 1819 when he was appointed as 1st Assistant to the British Resident at Indore. He continued to serve in an administrative capacity as Political Agent in Haraoti (the territories of Bundi and Kotah in the Rajputana Agency)1822–32, then Superintendent to the Mysore Princes in 1836, before being appointed Resident at Lucknow in 1839. Meanwhile, his military career progressed through seniority: regimental Captain 1818, Major 1823, Lieutenant-Colonel 1829, Brevet Colonel 1834.

Caulfeild left India on furlough in 1841, and never returned. Promoted to Major-General in 1841 and Lieutenant-General in 1851, he was a Director of the East India Company 1848–51, and stood for Parliament, unsuccessfully contesting the seat of Abingdon in 1845 and 1847 before finally winning it in July 1852. Caulfeild’s career as a Member of Parliament was short, however, because he died at Copsewood, Pallaskenry, County Limerick, on 4 November 1852.

So this would seem to be the right gentleman. At the time of his donation he was a Major, but as we can see from the biography continued to make regular progress through the ranks. The manuscript which he donated is a copy of the Pṛthvīrāja-rāsau attributed to Cand Bardai. This particular version has been copied by various scribes under the patronage of Maharajas Kishore Singh and Bhim Singh. The colophon of prastāva 36 (Haṃsāvatī-vivāha) gives the scribe’s name as Gulāb and the date as Samvat 1883, Jeṭh kṛṣṇa Sauma in the reign of Kiśor Singh. The colophons of pr. 38 and 43 mention Bhīm Singh as reigning. The final colophon gives the date as Samvat 1883, uttarāyana, Vaiśākha śudi 4, Guruvāra, and the place as the temple in Kota. It is a delightful copy which has a Indian binding with flap and broken clasp (possibly silver), covered with red brocade flowered silk. 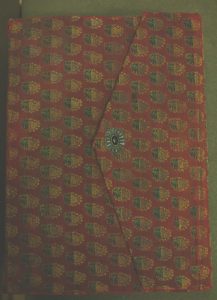 The pages have coloured floral decoration on their edges: 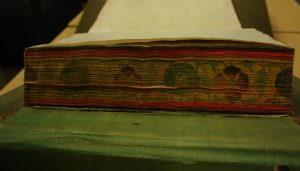 The text is in black and red: 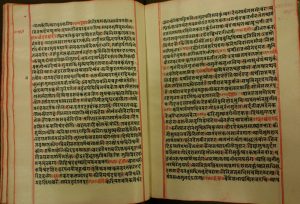 And at the beginning of the text is a full page fine Rajput style portrait of Prthvi-Raja, seated with bow, arrows and shield: 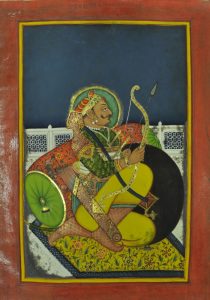 The full description for Tod MS 120 can be found on our online catalogue and the catalogue for the Papers of James Caulfeild is available on Archives Hub.

Before finishing the blog post, I would like to remind you of some of the upcoming lectures. On Tuesday 17th February, Dr Oliver Crawford will lecture on “The Languages of Indonesian Socialism” in which he will examine how Marxist ideas were communicated to the Indonesian people in the 1920s and 1930s. Further details of the lecture can be found here. And on Tuesday 26th February, we are pleased to announce that Deborah Freeman Fahid will deliver her postponed lecture on “The Àger Rock Crystal Chessmen: Some Early Medieval Imports from the Iranian World?” which will focus on a group of Islamic rock crystal chessmen from the early medieval period in The al-Sabah Collection, Kuwait. Again further details can be found on our website.