Last night (Thursday 14th) we welcomed Dr. Yossef Rapoport  from Queen Mary, University of London to lecture on the “Lost Maps of the Caliphs: Drawing the World in Eleventh-Century Cairo”, a lecture to coincide with the launch of the book of the same name written by Dr. Rapoport and Professor  Emilie Savage-Smith.  The book considers, among other things, The Book of Curiosities one of the greatest achievements of medieval mapmaking which is also a remarkable contribution to the story of Islamic civilization. It contributes to our understanding of the medieval Islamic view of the world.

This lecture continues a long history of Meetings  of the Society at which lectures have been given and Papers read, dating back to the beginnings of the Society. And today (March 15th) marks the 196th anniversary of the commencement of the Society. It began with a meeting at the Thatched House Tavern, St James’ Street, London, on 15th March 1823 and the Minutes for the meeting state that:

“The meeting had been convened by a printed letter, previously circulated among the members: in which the business, that the meeting would be engaged in, was communicated. It was stated to be chiefly the Election of Council and Officers. The meeting was numerously attended.”

It was also minuted that “His Majesty King George the Fourth, had been graciously pleased to declare himself Patron of the Asiatic Society”. Also, “That the Society be  called The Asiatic Society of Great Britain and Ireland”. A ballot was conducted to elect Officers – the President being The Right Honorable Charles Williams Wynn; the Director, Henry Thomas Colebrooke; the Vice-Presidents, Sir George Thomas Staunton, Sir John Malcolm, Sir Alexander Johnston and Colonel Mark Wilks; the Treasurer, James Alexander; and the Secretary, George Henry Noehden.

That first meeting was taken up with business, but already, in the second meeting, the reading of a Paper took place – chiming with the aims of the Society to disseminate and increase people’s knowledge of Asia. On 19 April 1823, it was minuted that “The reading of a paper entitled, ‘Memories concerning the Chinese’ by John Francis Davis F.R.S. M.A.S. was begun”. And so the first ‘lecture’ took place.

Of course, no Society starts from nothing – there has to be an individual or a group of people who have an idea and the wherewithal to turn their vision into a reality. And we have a Minute book entitled “Minutes: Preliminary Meetings: Establishment of the Asiatic Society”. These meetings began on 9 January 1823 and were held at the home of Henry Thomas Colebrooke. Fourteen other gentlemen attended that first meeting. They met twice in January, and three times in both February and March sorting out such things as a name, creating a prospectus, and the appointment of a Committee of Management.

Though we don’t have the original printed letter sent to prospective members, we can also trace the origins of the Society through a series of letters. The archives hold six letters from William Colebrooke to Sir Alexander Johnston. These are: 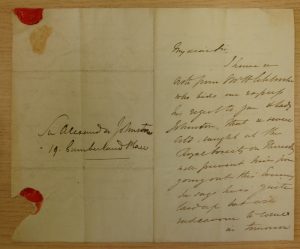 These have become part of our Governance Records as Preliminary Correspondence and their catalogue can be found on Archives Hub.

So, if you are out for a drink this evening or over the weekend, please raise a toast to the Royal Asiatic Society. And before I finish this blog post, let me remind you of our next lecture which will be on Tuesday 19th March, 6.30 pm, when Ursula Sims-Williams from the British Library will lecture on “Tipu Sultan’s Library: Building a Collection”. We hope many of you will be able to join us for this lecture. And of course, we would also like to remind you of our next Collections Open Evening which will take place on Tuesday 26th March. We welcome three speakers to share their reflections on working with our Collections:

And we will have a host of treasures out for you to view.