This Friday (5th March) marks the anniversary of the death of the Orientalist and former President of the Society, Sir Henry Creswicke Rawlinson: 1810-1895.

In 1827 he was sent, aged 17, to Bombay as a cadet in the East India Company army. He studied Persian, becoming fluent, which was to prove invaluable when he was sent to Persia in 1833 with other British officers to train the Shah’s army.

While in Persia, Sir Henry developed a keen interest in the great trilingual cuneiform inscription of Darius the Great at Behistun (Bisitoun) in Old Persian, Elamite and Babylonian. He was able to decipher the Old Persian section after scaling the great rock face that later led to the decipherment of the Mesopotamian cuneiform script by himself and others. This was a great achievement and was the beginning of his long association with the Society. Some of these inscriptions were published in the Society’s journal and papers relating to this are held within the Library collections.  For his work on these inscriptions and geographical observations of Mesopotamia and Central Asia, he was elected a Fellow of the Society in 1850 and later served as President of the Society for two terms in 1869-1871 and 1878-1881.

The Society holds a large collection of archival material relating to the work of Sir Henry and a full listing, completed by one of our volunteers, can be found here.

This listing showcases the variety of interests that Sir Henry held. It is fortunate that so many of his personal papers still exist as many were destroyed in a boat fire in 1842. It is my intention to commence the cataloguing of these papers when lockdown restrictions are eased.

Sir Henry’s interests continued to grow in his later years and he was involved in various activities alongside his work at the Society. This included serving as a member of Parliament (1858, 1865-1868), becoming a Trustee of the British Museum (1876-1895) and serving as President of the Royal Geographical Society (1874-1875).

On the 25th February, the Society hosted a virtual book launch which saw Professor Christopher Hancock and Graham Hutchings discuss Prof Hancock’s new book, Christianity and Confucianism: Culture, Faith and Politics. After summarizing the historical encounter between Christianity and Confucianism in the early modern period, Prof Hancock described a long process of mutual formation: one which saw both these vast and complex cultural traditions impact one another, as well as the cultures that gave rise to them. The audience enjoyed this rich and wide-ranging conversation about a fascinating subject of great importance at the present time. This book launch can also be viewed on the Society’s YouTube channel: https://www.youtube.com/channel/UCXi0hS5mxNzy7icPV485FfQ

Please join us on Tuesday March 9th at 6:30pm for a virtual lecture by Dr. Simon Kaner: University of East Anglia for a lecture entitled ‘The Rehabilitation of Myth in the Archaeology of Ancient Japan and Korea.’

This presentation will focus on the excavated remains of huge pillars at the Izumo Grand Shrine in Shimane Prefecture which reawakened interest in the early history of this monument and the interface between archaeology, history and myth in the understanding of ancient Japan. 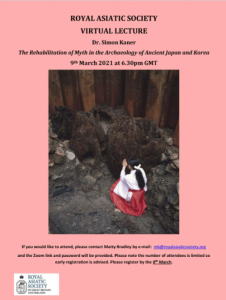 If you would like to attend, please email Matty Bradley at mb@royalasiaticsociety.org by the 8th March. We look forward to seeing many of you there!