This week’s blog post is kindly written by Rev. Steven L. Shields who has recently become the President of the RAS Korea branch, following Brother Anthony of Taizé who stepped down after ten years in the role. Rev Shields writes about the current activities of the Korea branch and the impact that Covid-19 has had on their work.

RAS Korea Adapts During the Pandemic:

The officers and members of the Royal Asiatic Society’s Korea branch send our heartfelt greetings to all RAS members and friends wherever you may be. We are hopeful that we see the light at the end of the tunnel after more than one year of suffering lockdowns, social restrictions, and the terrible loss of life due to Covid-19.

As RAS Korea begins its 121st year since being chartered in 1900, we have elected a new president to take the helm. Our president is elected for a two-year term, but our immediate past president, Brother Anthony of Taizé MBE, served five consecutive terms. His shoes are hard to fill indeed. As an expression of appreciation for Brother Anthony’s devoted service and continued participation in the branch’s activities, the council has proclaimed him president emeritus.

Our branch has offered twice monthly lecture venues, open to members and paying guests for many decades. We have also had near-weekly excursions to historical or cultural sites. Our monthly literature club has, for many years, read and considered English-language translations of Korean literature. For several years, we have co-sponsored a monthly colloquium with Korea University’s Ècole Française d’Extrême-Orient.

However, since the spring of 2020, our regular programs were no longer permitted by the Health Ministry and local governments’ social distancing regulations. Not being able to meet in person continues to be a regret, as we cannot easily connect with our members and friends. Nor are scholars from overseas visiting Korea for research and special teaching assignments. Faced with this dangerous and unusual challenge, RAS Korea turned to technology to continue as much of our annual programming as we could.

Since the pandemic began—and we might remind our RAS friends that Korea was the second country, after China, where the virus exploded—we switched our lectures and literature club to the internet platform “Zoom.” This new-to-us technology has broadened RAS Korea’s ability to pursue its mission of exploring and publishing Korean studies worldwide. Not only can we enjoy lectures from scholars wherever they might reside, but our audience has also broadened—and we typically have more online attendees than we have had at our in-person venue. More significant numbers aside, we now have overseas members and friends who join the lectures and literature club gatherings in more than a dozen countries. Recently we have had Korean studies scholars and enthusiasts join us at 3 a.m. from the US or similar time zones in the Asia-Pacific region, including Australia, New Zealand, Japan, China. Not long ago, we had two or three from India and Pakistan join our online gathering. We have friends and members joining us from Czechia, England, Germany, Hungary, Italy. It is a thrill to have such a diverse audience.

Excursions have recently focused on day-trips or half-day-trips that can be accessed from Seoul by public transport (train or bus), with a scholar accompanying the groups to explain in depth about the venue. While occasionally exploring popular tourist locations, RAS Korea excursions are much more than a “tour guide” experience (as valuable as those energetic professionals are). Sometimes the experts are well-studied ex-pats; many are Korean experts. Often, we operate bilingually, either the experts themselves or a skilful volunteer interpreter. These smaller group experiences (usually limited to about 20 people) provide ample time for detailed questions and discussions. The pandemic forced us to cancel most of our schedules during 2020. So far in 2021, we have not been able to go on any excursions since Korea is generally operating under a 4-people only group restriction (even in our homes, except for legal residents of the domicile). We think virtual excursions might play an important role, but we lack enough volunteers with the time and technical expertise to do so. We continue to pursue the idea.

About three years ago, RAS Korea began a recent engagement with high school students. One day, we were surprised to receive by email a series of four essays from students at the Dongducheon Foreign Language High School (DFL), located north of Seoul, about 65 km. If I might call them that, these young scholars found out about RAS Korea’s work through a Korean-language daily newspaper, the Chosun Ilbo. Their essays covered history, social, and cultural topics. We were impressed that the young people had written in English, a second language for them. The student-organized group of Korean studies enthusiasts at the high school continues with a new president elected each year from among the senior-year students. We officially appointed the group as a “branch” of our Seoul-based society. We do what we can to encourage both their language skill development and their interest in Korean studies.

Because of the students’ enthusiasm at DFL, we were encouraged to launch an annual essay contest, with prize money sponsored by a donor organization. Last year marked the first of these contests, and three prize winners were selected. The first-place essay was published in our annual “Transactions.” Last fall, despite the pandemic and upset school schedules, we launched our second annual contest and are currently awaiting the deadline to see what new ideas might come from the network of more than 30 foreign language high schools in the Republic of Korea.

RAS Korea remains entirely self-funded. We have no governmental support and rely on our members’ annual dues and donations. In the recent past, we’ve enjoyed donations from the business sector, including the Asia Development Foundation (an independent organization established by a Korean industrialist), which supports small organizations like ours that promote Korean culture.

I’ve been a member of RAS Korea since the late 1970s and served on the council for several years before being invited to take on my current role. My goals as president are to diversify further the leaders and council members and our lecturers and published papers. Korean studies scholars are now found in countries worldwide, and we want to include their scholarship in our offerings.

I’m honoured to have been elected president of the Korea branch of the Royal Asiatic Society.

We would like to thank Rev. Shields for his contribution to this week’s blog post and to welcome him as newly elected President of the Korea branch.

Please join us on Tuesday March 16 at 6:30pm for a Zoom lecture by Dr. Hannah Theaker entitled, China’s Little Mecca: Changing Islamic Landscapes of China’s Northwest in the Late Qing, 1860-1911. Dr. Hannah Theaker is a Visiting Fellow at the University of Oxford China Centre, whose research explores religion, ethnicity and migration in late imperial China.

The lecture examines the city of Hezhou which was the only Islamic religious centre left standing following the Great Northwestern Muslim Rebellion, 1860-1874. The result was a transformation of the ecumenical scene of the northwest which this presentation will cover alongside exploring the legacies of the late 19th century for the modern Islamic landscape of the northwest. 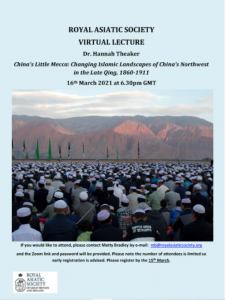 On Tuesday 23rd March at 6:30 pm, we have a virtual book launch by Dr. Ronan Lee on Myanmar’s Rohingya Genocide: Identity, History and Hate Speech. The publication draws on thousands of interviews and studies from the Rohingya in an attempt to assess and outline the full scale of the genocide in Myanmar. 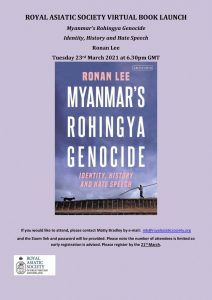 If you would like to attend these events, please email mb@royalasiaticsociety.org and the Zoom link and password will be provided. We look forward to seeing many of you there!