This week brought a greater sense of optimism with the advent of spring and the proposed plans for the easing of restrictions in the coming months.  We look forward to welcoming you back to the Society in the not so distant future and we will announce information about the re-opening of the reading room in the coming weeks.

Applications for this year’s Bayly Prize opened this week. The prize, established by friends and colleagues of Professor Sir Christopher Bayly FBA in 2018, commemorates his outstanding research and contribution to the study of world history.

Submissions are welcome from any graduate of a British or Irish university who has completed and been approved for the PhD degree for a thesis in the field of Asian Studies in a subject falling within the scope of the Journal of the Royal Asiatic Society or of Modern Asian Studies. The thesis must have been examined and approved for the PhD degree in 2020, with the date of the final approval letter falling between the 1st January and 31st December 2020. The deadline for applications is Wednesday, 31st March. Further information can be found on the Society’s website.

Marking the Society’s bicentenary in 2023:

Over the last year, the Society has started making preparations for commemorating its 200th anniversary in 2023. Whilst many of these activities will be announced within the coming months, one of the projects is the organisation of an Oral History Project entitled, ‘RAS Voices’.

The Society’s bicentenary provides an excellent opportunity to capture the memories of those who have played a significant part in the life of the Society or within the field of Asian Studies through a series of interviews. These will be used as part of the anniversary celebrations and should provide an interesting source of research material, both for now and the future.

More will be revealed in the coming months but it is hoped that we will have a rich collection of interviews that will have been conducted both in person and virtually.

Last Thursday evening (18th February), the Society welcomed Dr. Michelle C. Wang, Associate Professor of Asian Art History at Georgetown University for a virtual lecture entitled Dunhuang art: Buddhism and Kingship on the Silk Routes. Dr. Wang explored the Buddhist notions of devotion and kingship along the silk routes of north- western China in the medieval period. She explained how there was a shift from images centred on the Buddha to deity figures as a result of the collapse of the Tibetan Empire in 848 and the distance of the remote silk route kingdoms from imperial centres of power. The paintings of Mahamayuri (the Golden Peacock King) in the Mogao Caves at Dunhuang are such an example. The lecture was recorded and is available on the Society’s Youtube account. 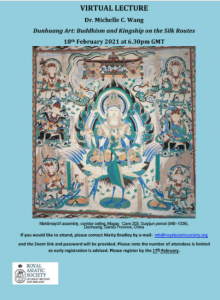 The Collections Evening will be held on Thursday 25th March at 6.30 pm giving us the opportunity to present the various projects that have been undertaken throughout the year enhancing our understanding of the Society’s collections.