As you will have read in last week’s blog post, I returned to the Royal Asiatic Society as the Archivist at the beginning of the year. In a series of coincidences I learnt how Emma would be leaving to take up her new position, just when I’d actively begun the process of hunting for a new archivist post. I’m happy to say the Society were willing to take me back. So I’m sitting, writing this blog, at the desk which I left fifteen months previously, and very content to be so doing. I spent the intervening time working on my own writing. I have several projects which I managed to progress further and though I can’t report any new publications on the horizon I’m hopeful, that in time, that will be the case.

Emma has been busy in the intervening period, continuing with cataloguing and caring for the collections and working on policies and procedures, as well as helping researchers and the other myriad jobs that make up an archivist’s day. In my first week back, I rediscovered my way around the collections and have now settled down to begin work in a number of areas. I am continuing to identify and describe the unlisted letters of the Henry Creswicke Rawlinson collection, something I started before I left the Society but didn’t have time to complete. Rawlinson is an important character in the history of cuneiform, but our collections also contain many personal letters, some from within his wife’s family.  This week I’ve been listing letters from Alfred Seymour who was in Brussels during the Franco-Prussian War. He writes to Rawlinson’s wife, Louisa, and his brother, Henry Danby Seymour, of the events around the fall of Sedan, and eye-witness account of both French refugees and prisoners. Our long-time volunteer, Roger Parsons has created a detailed list of most of the papers. When I have finished  listing these remaining ones I will be able to catalogue the whole collection on to Archives Hub, but in the meantime Roger’s List may be found on the website.

I’m also beginning to work on the Papers of Charles Ambrose Storey, the British orientalist and author of the bio-bibliographical survey of Persian literature. Storey went to Trinity College, Cambridge, where he studied Classics and Oriental languages graduating in 1912. In 1914, he was appointed Professor of Arabic at the Anglo-Mohammedan Oriental College (now the Muslim University) of Aligarh, India. He left India in 1919 to become Assistant Librarian to the India Office. Eight years later he was made Librarian, but left the India Office in 1933, having been elected Sir Thomas Adams Professor of Arabic at Cambridge University. He retired in 1947 and lived in Hove until his death. On his death, in 1968, he bequeathed his estate to the Royal Asiatic Society which included both his books and his research papers. These papers are safely housed in archival boxes and listed but, as yet, uncatalogued. I’m looking forward to getting them into order and making them more readily available for researchers. Recently Brill publishers have used these documents to publish some parts of the bibliography that Storey failed to complete in his lifetime and which others had also not undertaken and Brill have made the work available online.

I will also continue to work with the institutional archives finishing the sections that Emma began, and concentrating on the records produced in the creation of the Journal. As you might guess, all of these are big projects, that will keep me busy for several months. So plenty to keep me smiling at my desk!

Yesterday, Thursday 13th January, our lecture series for 2022 started with Dr. Kate Franklin (Birkbeck University) lecturing on her latest book Everyday Cosmopolitanisms, Living the Silk Road in Medieval Armenia. As she says this book is ‘the product of nearly a decade of thinking about medieval (tenth through fifteenth centuries ) cosmopolitanism, or the practices of imagining the multiply scaled worlds within which one is situated, and of dwelling (acting, dreaming, making) within those worlds. Specifically, [she] investigates ideas of cosmopolitanism connected to the modern concept of the Silk Road, and how our understandings of medieval worlds are dependent on scales of doing, perceiving, analyzing, and imagining.’

Dr. Franklin discussed the role of caravanserais along medieval trade routes in Armenia  and how these served as points for cultural exchanges between the local villagers and urbane merchants with their caravans thus promoting cosmopolitanism at a local level.  Dr. Franklin discussed her excavations at the Arai-Bazarjul Caravanserai, built by the princely Vachutian family, in the Kasakh Valley region north of Yerevan, where she found a large amount of red slip pottery produced by the local villagers and used to serve meals to hungry travellers along with quantities of animal bones. Her work not only examines Armenia’s role in the international community of medieval times but is also concerned with the importance of those who inhabited villages along these trade routes  whose understanding of what was native and what was foreign can be termed ‘cosmopolitan’. Her book is available both in print and as  a free e-version from the OAPEN Open Access library.

The lecture was particularly well attended in person  providing a satisfying start to the New Year with the hope that things are slowly returning to normal.

Our next lecture is on Thursday 27th January when Dr. Farouk Yahya, Research Assistant in the Department of History of Art and Archaeology, SOAS, will talk on “Talismans with the names of the Seven Sleepers of Ephesus/Ashab al-Kahf in Southeast Asia” 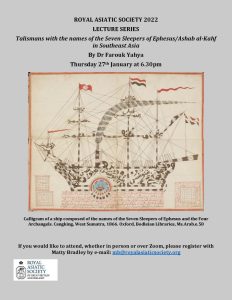 And finally, today (14th January), marks the 221st anniversary of the death of George Leonard Staunton who, in 1793, was Secrretary to the British Mission to China. He took an active part in the Macartney Embassy and, therefore, I’ll conclude this blog post with William Alexander’s watercolour of ‘The Approach of the Emperor of China to his Tent in Tartary to receive the British Ambassador’. which was given to the Society by Staunton’s son, George Thomas Staunton, in 1856.