We would like to wish everyone a very Happy New Year and hope that Covid did not intervene to prevent your celebrations.  The Society re-opened on the 4th January and we are delighted to welcome back Nancy Charley to resume her duties as archivist of the Society. We would also like to thank Emma Nelson for her contribution to the work of the Society and wish her every success as she takes up her fulltime post in her new career as a registrar. The Society also offers congratulations to Dr. Edward Weech who was elected Chair of the National Committee for Information Resources on Asia at its AGM in December.

The first lecture will take place next Thursday, 13th January, as a hybrid event. The lecture, by Dr. Kate Franklin, Birkbeck, University of London is entitled Living the Silk Road: Everyday in Medieval Armenia, and will draw on research for her recent book Everyday Cosmopolitanisms: Living the Silk Road in Medieval Armenia, published by University of California Press in 2021. In the book the highlands of medieval Armenia are examined as a case study showing how early globalization and everyday life intertwined along the Silk Road. Armenia, and the Silk Road itself, consisted of overlapping worlds created by a diversity of people; both long-distance travellers and the local rulers and subjects. Dr. Franklin highlights the cosmopolitan dimensions of daily life as she vividly reconstructs how people living in, and passing through, the medieval Caucasus understood the world and their place within it.

Dr. Franklin is an archaeologist of medieval Armenia and the Caucasus. She has been working on collaborative projects in the Republic of Armenia for a decade, exploring the ways that local politics and Silk Road culture were tangled together in landscape and space-time. She trained as an anthropologist at the University of Chicago and is currently field co-director of a project that combines thinking about routes and infrastructure, contemplating ‘domestic’ space, and appreciating the canyon landscapes of Vayots Dzor, Armenia.

If you would like to attend this event, either online or in person, please contact Matty Bradley using ‘Franklin’ as the title of your email. 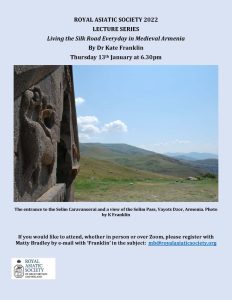 The RAS collections contain two Armenian manuscripts. These have been studied by Vrej Nerses Nersessian resulting in two articles in the Journal of the Royal Asiatic Society, Series 3, 27, 3, 2017, 359-376,  entitled Two Armenian Manuscripts in the Library of the Royal Asiatic Society of Great Britain and Ireland. The first manuscript contains the Pauline letters with additional editorial material, the Apocryphal Letter of the Corinthians to St Paul and the 3rd Letter of Paul to the Corinthians and dates to 1246. It is bound with leather covers over wooden boards and the front and back are tooled with geometrical designs. The illustrations below give some idea of the style and beauty of this manuscript: 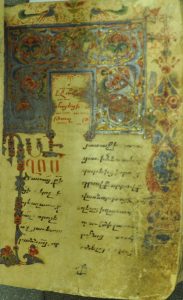 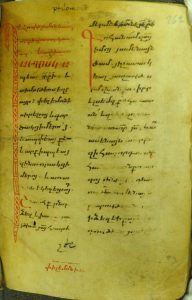 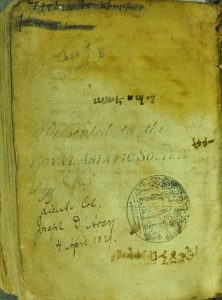 As can be seen from the inscription, this manuscript was donated to the Society by Lieutenant Colonel Joseph D’Arcy on 4th April 1829. D’Arcy served in the British Royal Artillery and went to Persia with the ambassador, Sir Gore Ouseley, in 1811, on a mission to reform and equip the Persian army, and help in the fight against Russian forces. D’Arcy returned to Britain in 1815 with some Persian students – a venture which seems to have ended disastrously. More about his life can be found on Encyclopaedia Iranica and a more detailed account can be found here.

The second Armenian manuscript within the Society’s collections is the Chronicle of Georg Khubov which is an unique source concerning Armenian political aspirations for independence in the 18th and first half of the 19th centuries. Khubov was born in 1764. He became a seminarian from 1771-1780 during the Catholicate of his uncle, Simeon I Erevantsi (1763-1780). After leaving the seminary he became an advisor and intermediary between Mahmad Khan and the Russian Major Korsakov, stationed in Atrpatakan. In 1803, he was accused by the Persians of being a Russian spy. They expelled him from the country, so Khubov and his family settled in Tiflis. His Chronicle, which  contains a Genealogy of Armenian kings and nobility, was completed in St. Petersburg in 1814, whilst actively working to have his ‘princely’ status validated by the Russian court; something he achieved by 1816. 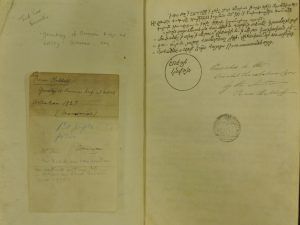 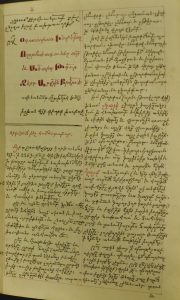 Of course, these manuscripts are available to view in our Reading Room, which continues to be open on Tuesdays and Fridays from 10-5, and on Thursdays from 2-5. We just ask that you contact us prior to coming so that we can monitor the numbers of researchers to ensure safety for all.