The January 2022 JRAS (vol 32:1) contains (among other essays) five related articles about Sanskrit literature during the 500 years or so when Persian was the dominant language of culture in north India. The articles show a lively and continuous use of Sanskrit as a literary language, taking many forms, throughout this period. The collection has been guest-edited by Professor Luther Obrock of the University of Toronto. Accepted for publication some time ago by Professor Ansari, one of the articles is by Professor Daud Ali, the Journal’s new editor. That he is published as a contributor in the first issue to carry his name as Editor marks a seamless transition in the character of the Journal.

Professor Ansari’s distinguished twenty-year tenure as Editor saw the Journal increase in size and vigorous engagement with new areas of research. Articles already accepted for publication during her editorship will continue to make their way into the printed publication during 2022 and 2023. Her Preface to the Sanskrit literature ’special issue’ appears here:

Situating Sanskrit after the Sultanates

This special collection, guest-edited by Luther Obrock, explores what he describes as “Sanskrit interlopers in a Persian age”. Engaging with the issue of its purported ‘decline’ that has been long embedded in academic and non-academic debates, the collection’s articles collectively address the complexity of Sanskrit, and Sanskrit’s use, under the sovereignty of Muslim polities in second-millennium North India (twelfth to seventeenth centuries ce).  By focusing on the context within which Sanskrit material was copied or composed at Sultanate and Mughal courts, it makes a very timely contribution towards deconstructing “the simple cultural binaries of Hindu and Muslim in South Asian history”.

In this venture, Obrock is joined by four other scholars, namely Daud Ali, Shankar Nair, Pranav Prakash and Steven M. Vose, whose combined efforts have resulted in a set of essays that shed new light on “Sanskrit’s various uses in an increasingly vernacularised or Persianised world”.  Encompassing literature and mercantile dealings, the lives of poets and scenes of authorship, a Jain monk and his relationship to Muslim rulers, and more, key challenges are raised, such as: How did the increasingly powerful transregional language of Persian impinge upon Sanskrit literary culture? And did Sanskrit become merely a “dead” language for elites, or rather did it evolve into an additional ‘vernacular’ that allowed poets, among others, added freedoms?  Through its attention to these and other questions, the collection provides valuable insights on how, and how far, supposedly ‘dead’ languages can resonate powerfully with respect to unfolding literary, political and social cultures during periods of significant historical change and continuity.

JRAS readers interested in the changing ways in which the study of Sanskrit has been approached over the last (nearly) two centuries will find much evidence on this contained in the pages of earlier issues, now available in digital libraries such as jstor and via the journal’s Cambridge Core website.)

The Journal re-opens for submissions on 1 February. Meanwhile, Fellows can read articles and reviews before they appear in print by going to the Journal on the Society’s website and clicking through to the JRAS page on the Cambridge Core platform. Appearance on ‘FirstView’ is now the formal date of publication with allocation to a printed paper volume following.

Fellows can also read on the same website all the articles published since the Journal was first published in 1834.

Next Thursday 6.30pm Dr Farouk Yahya will give a hybrid lecture entitled Talismans with the names of the Seven Sleepers of Ephesus/Ashab al-Kahf in Southeast Asia. Farouk Yahya is Research Associate in the Department of History of Art and Archaeology, School of Arts, SOAS University of London. His research interests include the Southeast Asian arts of the book, as well as texts and images relating to magic and divination in Southeast Asia. He is the author of Magic and Divination in Malay Illustrated Manuscripts (2016), editor of The Arts of Southeast Asia from the SOAS Collections (2017), and co-editor of Islamicate Occult Sciences in Theory and Practice (2021).

To attend this talk please register with Matty Bradley at mb@royalasiaticsociety.org 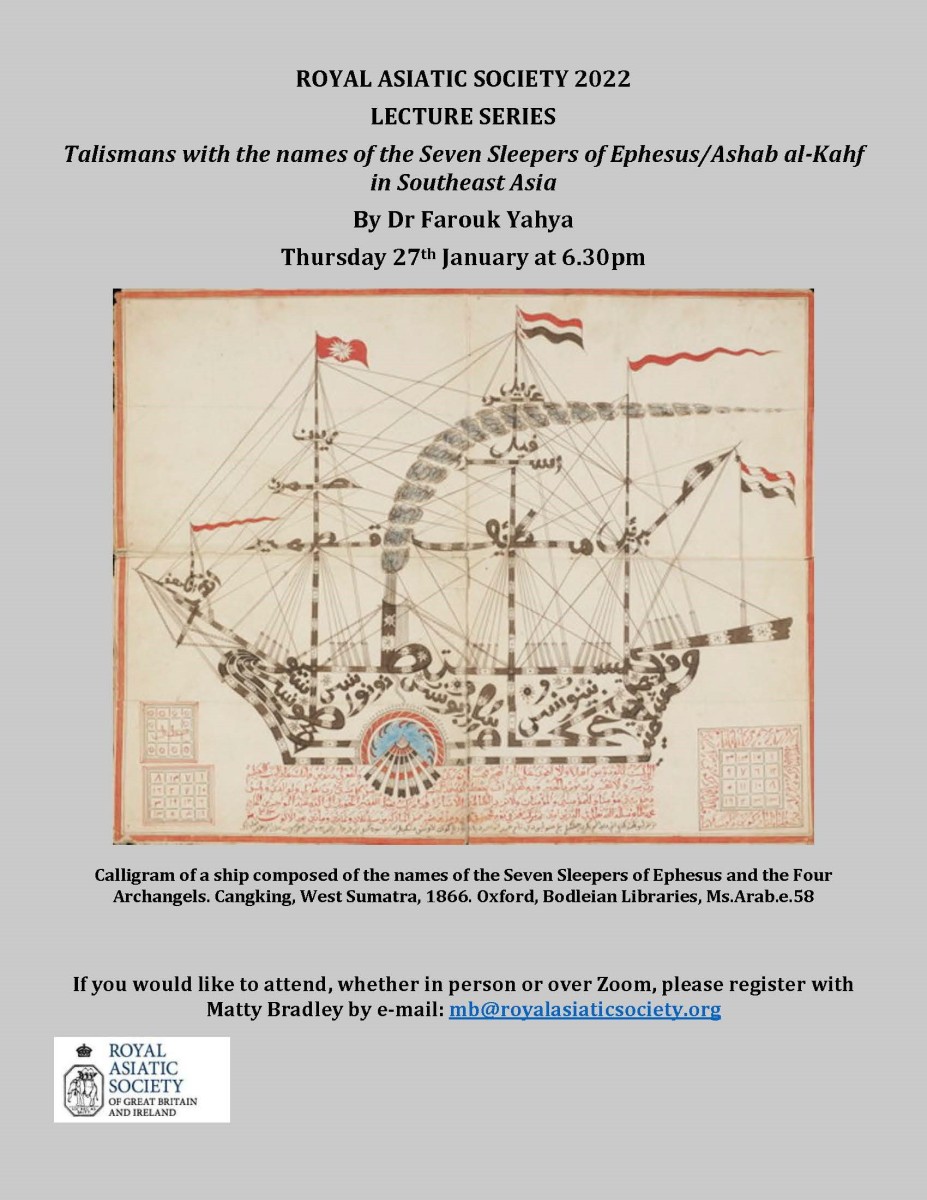 January 22nd marks the anniversary of Gerald Tibbetts’ birth, member of the RAS and scholar of the early modern Arab world who specialised in the history of Arab navigation. In 2020 the Tibbetts family kindly donated a collection of his personal papers, maps, and articles, which can be accessed here: https://archiveshub.jisc.ac.uk/search/archives/65670b60-7e50-397a-b28a-9688e3ed810d