This week we look at some more of the items found in Miscellaneous Box M:

Within the box is a letter from Stephen Austin and Sons Ltd; Oriental, General and Artistic Printers for 29 November 1933 in which they write that they have found a few plaster casts of coins and some photo negatives of Chinese and other inscriptions. 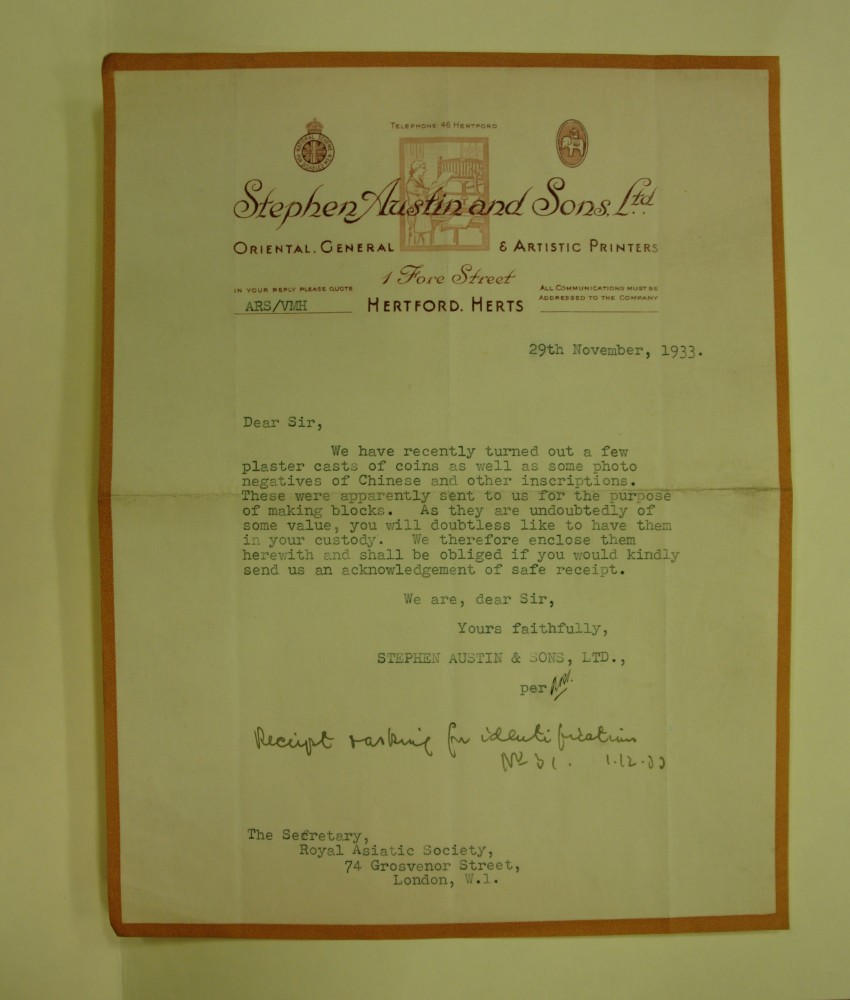 Austin, at that time, were the printers of the Journal of the Royal Asiatic Society and they believed these items must have been sent for creating printing blocks. 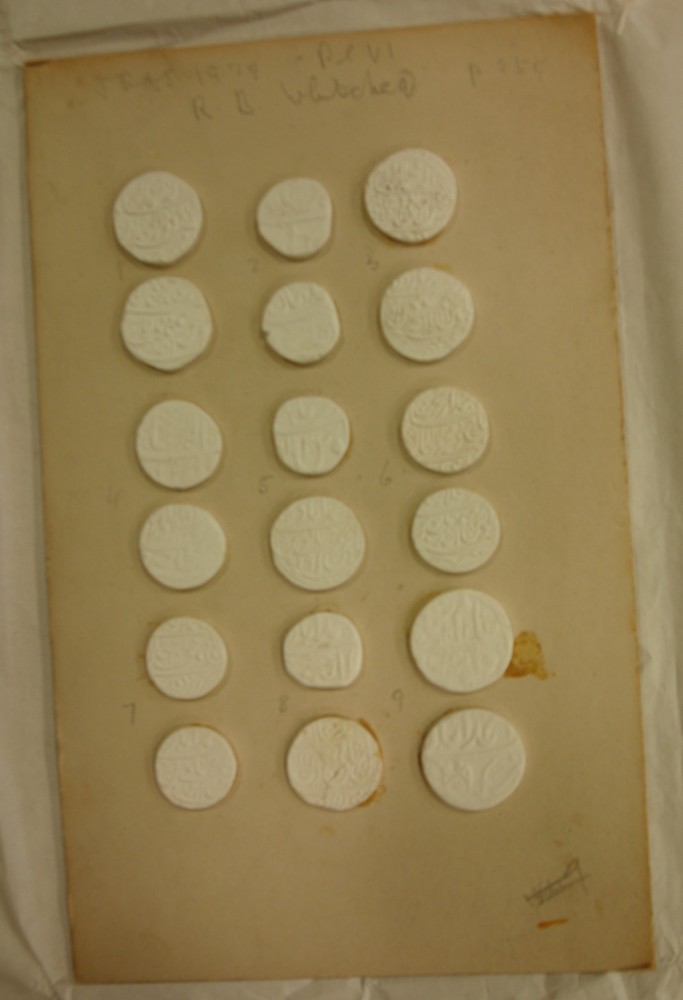 And a quick search in the Journal leads to finding the plate. This accompanies the article by R.B. Whitehead: “Akbar II as Pretender: A Study in Anarchy”. 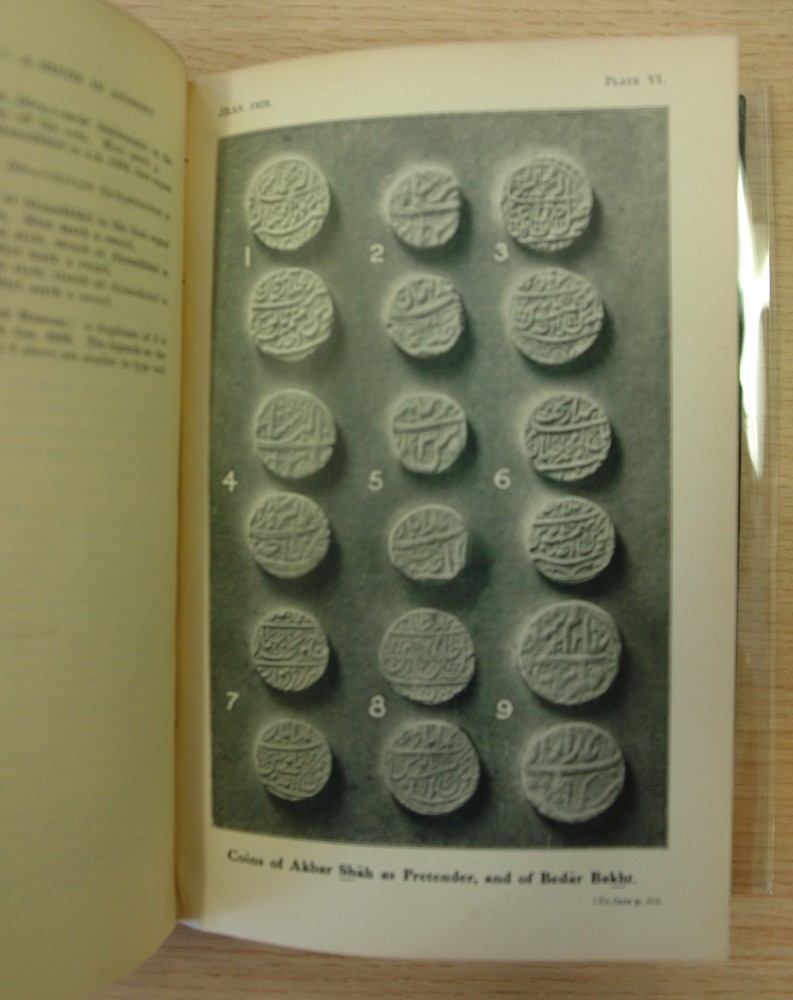 So, this was a fairly easy find. Within my current organising of the RAS Archives into their various record-making activities, these will therefore be listed under Journal, and housed with other items connected with the Journal. But they were also in need of some “loving care”. They had been housed in a rough wooden box packed with acidic card and paper with the misleading label, “Plaster Casts of Chinese Coins”. The actual mounting card needed cleaning with smoke sponge and soft brush to remove the dirt (the letter had also needed this treatment). Also, two of the coins had come loose from the card. I am grateful to David Jacobs, conservator, who on a visit to the Society brought the appropriate adhesive to refix them. Then I wrapped the casts in archival tissue paper and created a box from archival card to properly house them and transferred them to the Journal section of the RAS Archives.

But in preparation for future cataloguing I wanted to research who was R.B. Whitehead and why was he writing on Akbar Shah as Pretender?

Richard Bertram Whitehead was born in Liverpool in 1879. He won an Open Scholarship to Oxford and in 1902 was selected for the Indian Civil Service. His work was in “Settlements” – the periodic reassessments of land revenue and through this work he began to understand the historical significance of coin finds that were being made in Punjab. In 1907 he became the official examiner of the treasure trove for the Punjab Government and in 1910 in Allahabad he became one of the founding members of the Numismatic Society of India. Whitehead was both Honorary Secretary and Treasurer.

He retired from the Punjab in 1922 and settled in Cambridge. He became a Fellow-Commoner at St John’s College and was Advisor to Indian Students. He was active in the Royal Numismatic Society and presided over the Oriental Section of the International Congress in London in 1936.

So, he certainly had the qualifications to be writing an article about Indian coins, indeed he wrote many articles and publications on Indian Coins. In this particular article, he argues that Akbar Shah, son of the Mughal emperor Shah Alam II, was elevated to the throne of Delhi as Pretender 18 years before his actual accession as Akbar II and at that time, money was struck in his name. He proceeds to tell the story of a declining Mughal empire and the intrigue that was happening around the time of 1788. The plate numbers 1-5 are all of coins struck for Akbar Shah from his “Pretender” era A.H. 1202 -1203 and Whitehead writes these are very different from those struck when he was emperor.

Whitehead also writes about the coins of Bedar Bakht – who was claimed as Emperor by the rebels and so coins were also struck in his name. These are illustrated by nos. 6-9 on the Plate. The article gives full descriptions of all the coins for those interested.

The actual coins should be found in the British Museum, presumably part of their purchase of Whitehead’s Collection in 1922. For anyone interested, his Papers are held at Fitzwilliam Museum, Cambridge.

So that is another item that can be more accurately housed and listed ready for cataloguing. But there were also three other small plaster casts without any labelling. 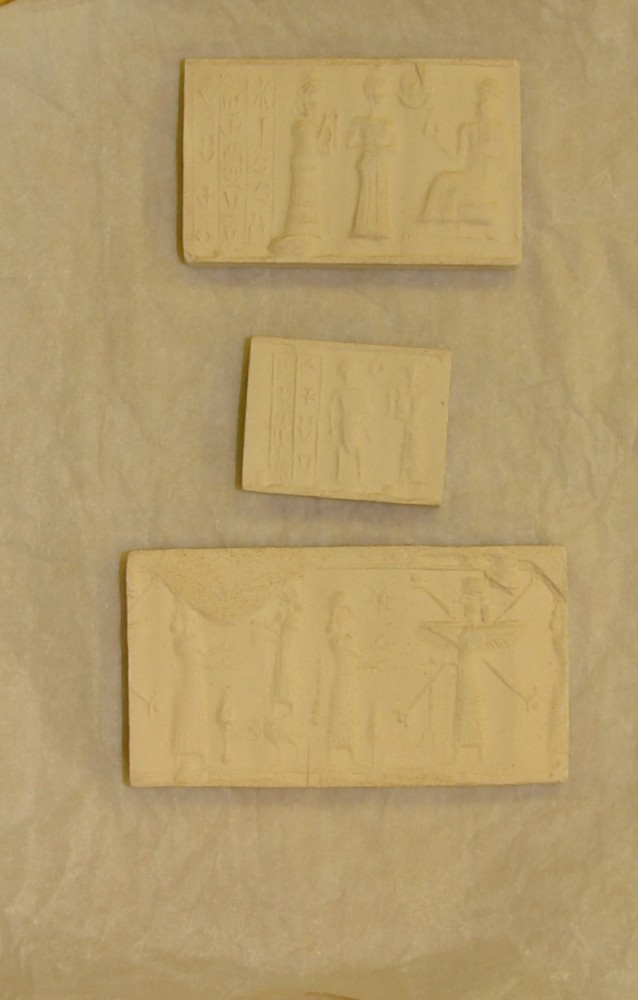 To what do these belong? I had to spend quite some time studying the Journals – but eventually there was success. These three appear in the JRAS for January 1927 to illustrate the article “Six Babylonian and Assyrian Seals” by S. Langdon. These three are of the first three seals that Langdon describes. The first is from the period of the Dungi and Isin dynasty (2409-2075). A worshipper stands with hands folded at the waist before a seated deified king, and behind him the mother goddess with both hands raised implores the aid of the divine king for her human protégé. This seal, and the second one, were owned by a Mr Casson of New College, Oxford.

The second seal is of a woman and is engraved with the design of the glyptic of the First Babylonian dynasty – that of the Amorite god Amurru and his wife Shala. The upper circle represents the sun.

The third seal is an Assyrian seal of the Late period and shows a worshipper before a deity who stands upon a mythological animal with human head, bird body and scorpion tail. This seal was owned by a Mr L.D. Grand of the Ministry of Defence in Baghdad.

S.H. Langdon was Professor of Assyriology at Oxford. He was born in 1876 in America and lived in America and Paris before moving to Oxford around 1907 and becoming part of the Assyriology department. He also spent some time at the University of Pennsylvania Museum of Archaeology and Anthropology, serving as the curator of its Babylonian section. He died in 1937 at the age of 61 years.

In terms of care of the casts – I have wrapped then in archival tissue and put in a small box and they will be listed to be catalogued in the Journal records.

The photo negatives suggested by Austin’s letter are actually three glass plates – two still intact and bearing the same image in different sizes and a third, which sadly is in six pieces but still recognisable as a piece of text. A hunt through the Journal of the RAS for 1929 finds that it is the image for Plate 1 and is of a “Fragment of Papyrus, B.M. 10447” and was to accompany the article “Book-keeping for a Cult of Rameses II” written by S.R.K. Glanville in which he undertakes a translation of the papyrus. 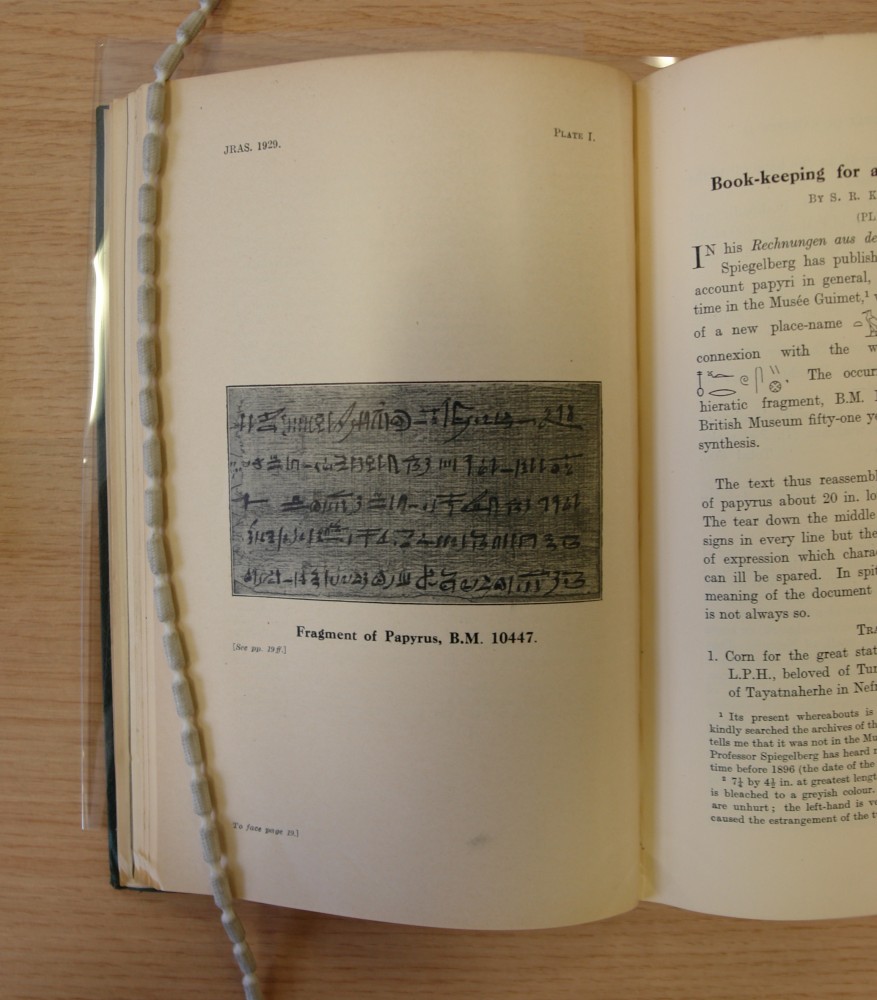 Stephen Ranulph Kingdon Glanville, was born in London in 1900 He graduated from Oxford in 1922 and  worked for the Egyptian Government Service before joining the Egypt Exploration Society Expedition to el-Amarna in 1923. Glanville was appointed Assistant in the Department of Egyptian and Assyrian Antiquities at the British Museum in 1924. He was part of excavations again in 1925 and 1928. He spent the rest of his life as an academic Egyptologist and was known for his work on demotic writings – this article being a case in point. But his Wikipedia entry made me smile – about the same time that this article came out he was also preparing the Royal Institution’s Children’s Christmas Lectures on “How things were done in ancient Egypt”.

Another fun fact about Glanville’s life is that he was a close friend of the archaeologist Max Mallowan and his wife Agatha Christie. He was in service with Mallowan during WWII. Glanville was the source and inspiration for at least two of Christie’s works – the historic mystery, Death Comes as the End, and a play, Akhnaton. Both of these works are set in ancient Egypt, and Christie suggests in her autobiography that neither of these works would have been possible without Glanville. A less fun fact is that he died on his 56th birthday on 26 April 1956.

The slide was wrapped in some decaying wadding material so I created a four-flap folder from photographic paper and it will be housed in a specialist glass slide box to become part of our glass slide collection. Conservator advice suggested putting new glass either side of the broken slide – so that goes on the list for conservation.

The other slides, I also managed to identify – but they will wait for a future instalment…