Discovering the identity of glass slides was the tiny cliffhanger on which I left the last blog post. The other two glass plates in the box also turn out to be images for the Journal of the Society for 1929. 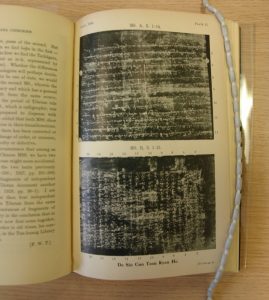 They formed Plate II to accompany the article “A Chinese Mahayan Catechism in Tibetan and Chinese Characters” written by F.W. Thomas, S. Miyamoto and G.L.M. Clauson in which they examine a manuscript in Tibetan and non-Tibetan language which was then in the India Office Library and had been acquired by Aurel Stein from the hidden library of Dunhuang. This links with another of our Collections. We hold over 800 photographs that belonged to Aurel Stein, most of which are mounted on card and marked up ready for putting in his publications.  They include ones of Dunhuang and the Daoist monk who supplied the manuscripts.

In the article the authors attempt a translation of the Manuscript. And here is where another item from the “Miscellaneous Box” finds its provenance. We have the original printing blocks for the Chinese characters for this article – housed in 2 cardboard boxes helpfully labelled “Chinese type”. 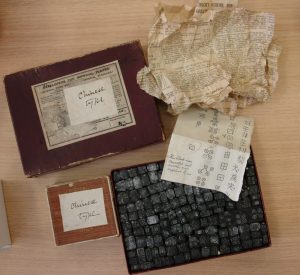 Or so I initially thought…

On close examination I find print blocks that are not in the article – perhaps not so surprising, easy enough for others to get added in. But then there is some additional evidence.

Unfolding the bits of newspaper screwed up in one of the boxes I open it on “Wounded and Missing” and “Christmas Gifts for Soldiers and Sailors” and find the newspaper is for Monday 2 November 1914. The box too gives some clues. 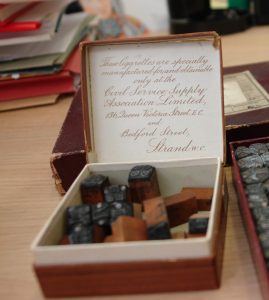 It is a cigarette box with the inscription:

“These Cigarettes are specially manufactured for, and obtainable only at the Civil Service Supply Association Limited, 126 Queen Victoria Street E.C. and Bedford Street, Strand W.C.”.

The Civil Service Supply Association, was originally founded in 1864 as the Post Office Supply Association – a cooperative to help Post Office workers buy goods more cheaply. It was expanded to include the whole Civil Service in April 1865. It began in the premises on Queen Victoria Street but moved to larger premises on the Strand in 1877. But by 1927 the company had become a private limited company and had severed its links from the Civil Service. The wording in the box would suggest that the box comes from before 1927.

Now it is possible that someone had kept an old box and a newspaper for 15+ years but looking in the Journal for 1914 and 1915 there are also articles that required Chinese character print blocks. Again, there are still some blocks I couldn’t recognise, so I think in final analysis I will have to list them within the Journal sections as print blocks from the early 20th century probably used in the printing of the Journal. And indeed, they may well have been used repeatedly for different issues of the Journal. The creative side of me would love to see them in use again – they could make some fantastic designs. As for care of the blocks – I transferred then to small archival boxes and I am still debating as to whether to keep the original boxes. Is that just keeping ephemera out of sentimentality or is there good archival sense?

There are also three larger print blocks housed within this box. The first is easy to date to 1959, far less easy to see why it should be in our Collections. 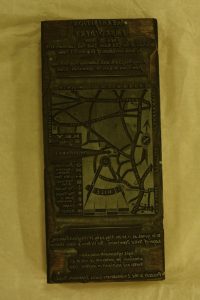 It is the advertisement for an “Exhibition of Embroidery Then & Now” to be held at the Old Knoll, Eliot Hill, Lewisham.  According to the “Ideal Homes” website, The Knoll, Eliot Hill, was one of several large houses built fronting on to Blackheath at the end of the 18th century.

The exhibition was being held by the kind invitation of Dr and Mrs J.E. Stokes, presumably the then inhabitants, and to be opened by a W. Wingfield-Digby, Keeper of Textile Department at the V&A. Proceeds would be going to the Embroiderers’ Guild Expansion Fund. Though the block says W. Wingfield-Digby it seems that the Keeper was a George Wingfield-Digby. I am grateful to the detailed history on the Embroiderers’ Guild website, by Chris Berry, to discover the reason why this printing block is in our Collections. Between 1946 and 1960, the Guild rented rooms in 56 Queen Anne Street, the premises of the RAS. In 1958, the Vice President, Lady Hamilton Fairley wrote letters to every Member explaining the urgent need for more adequate premises for the Guild which would also be a centre for embroidery enthusiasts from all over the world. According to the history, Mrs Stokes, the lady who made the Christmas cakes, started the fund with £100 donation. This must be the Mrs Stokes hosting the exhibition – obviously a woman of wealth and influence, and of hopefully tasty Christmas Cakes.

So, there is perhaps good reason for us having it in the Collections. Or maybe it should be returned to the Embroiderers’ Guild? Currently, the Guild are not taking any donations as their Collections are being catalogued, therefore no immediate decision needs to be made. In the meantime, it will be listed with the Property records – in some ways a welcome addition for though I have found several lease agreements for the Queen Anne Street property, I have yet to find one for the Embroiderers’ Guild.

The other two print blocks must surely be of images for the Journal – they certainly look like they should. 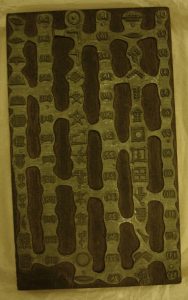 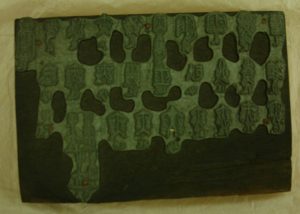 I have searched through 10 years of Journals previous to the Stephen Austin letter of 1933 and have searched 5 years either side of 1959 (the date of the other print block) and some others besides, I have not been able to locate them. For the time being, they will be wrapped in archival tissue paper and listed with the Journal things and hopefully some day when I am looking up something completely different in the Journal I will find their image staring me in the face.

Two more items left in Miscellaneous Box M, whose stories will wait for another time…