Last year, we were delighted to work with students from the Camberwell College of Arts MA in Conservation, who conserved items from our collections as part of their final projects. The conservators, Bethia Grice and Jasdip Singh Dhillon, spoke at the Society in May about their work, at the RAS Collections Open Evening.

After last year’s success, we were thrilled to be able to repeat the collaboration this year. Four students from Camberwell’s MA programme in Conservation (Laurent Cruveillier, Isana Skeete, Joey Shuker, and Rebecca Snow) elected to conserve items from our collection. Such collaboration provides an excellent opportunity for the students to put into practice, under supervision in a controlled environment, what they’ve learned on their course, and also means that important material in our collections benefit from specialized treatments that they might otherwise not receive.

The conservators chose to work with a wide range of material, reflecting the richness and diversity of the RAS collections. For her project, Rebecca Snow restored a drawing from the Tod Collection, titled “Northern elevation of the Temple of Rana Mokal, Chitor” (RAS 037.174), dating to around 1820. This ink drawing was made across eight sheets of Indian paper which had been joined together by adhesive. The drawing exhibited many tears, losses, folds, and creases, as well as historic repairs using a crusty glue, which caused discoloration and staining. Some sections were beginning to come apart and there was a lot of surface dirt. The object’s large size also posed a challenge as far as storage was concerned, and historically it had been stored in a folded position, as it was too big for even our largest shelves. All in all, the piece suffered from a number of problems which not only reduced its aesthetic appeal, but also posed a risk to its long-term stability and survival. 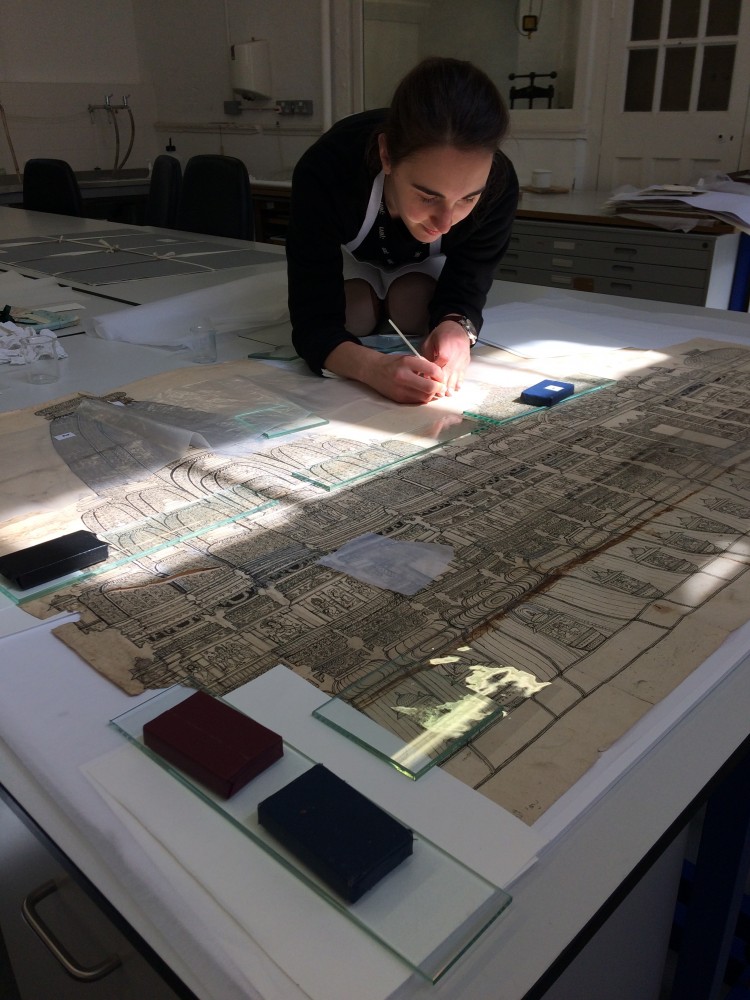 In addition to cleaning the drawing, Rebecca was able to reduce the glue residues, but only in areas without ink, as the ink was sensitive to moisture. This improved its appearance, although it was impossible to get rid of all the staining. Japanese tissue was used to repair tears, which also helped to reduce distortion and strengthen creases and folds. The treatment not only improved the drawing’s appearance: it also helped ensure that the object could be handled more safely, and that it can be used by researchers. Rebecca also created an ingenious storage solution for the drawing – a custom-made box containing a cylinder, around which the object could be draped rather than folded.

Joey Shuker’s project focused on the conservation of maps of two of the great mountains of China, Mount Hua and Mount Putuo. The woodblock print maps (one featuring a coloured wash) were printed on very thin and brittle Chinese paper, and over time had become heavily torn and creased, and were very difficult to handle without causing additional damage. Joey had to carefully examine the fragile paper and the ink to determine what sort of treatments would be safe to use.

In the end, Joey lightly cleaned the surface of the maps with a soft Chinese brush; used controlled humidification in a cedar wood chamber to help ease out creasing and folding; added a new lining for support; and filled in tears and losses with matching Japanese papers. The painstaking repairs ensured that the maps were stabilized, and can be safely handled and appreciated by researchers in the future.

Isana Skeete repaired two volumes of The Canton Register, an English-language periodical published in Guangzhou (Canton), China. The volumes date from 1829-1830, and served as a source of information on local commerce and public affairs for British traders and officials. Although most of the text block was in a generally good condition, there was still considerable surface dirt and some tearing. Moreover, the binding structure had failed, with book boards for both volumes completely detached, and one board missing entirely.  The remaining boards had been covered with beautiful Chinese silk, but this was lifting and separating from the board structure.

Isana removed the surface dirt with a hake brush and chemical sponge, and repaired tears with Japanese paper. The remaining boards were consolidated, and the corners infilled to solidify them and provide better protection for the text block. The missing endbands were resewn using orange and light green silk thread to recreate some of the original look of the bindings. As well as reattaching the existing boards, a new back board for volume two was created with undyed and unbleached Chinese silk, which Isana dyed to match the original blue. Using special techniques, a board was created with the same thickness as the original, and with a similarly light and soft feel. Finally, Isana created a Chinese style four-sided case to house the volumes, providing extra protection as well as easy access to reduce wear and tear from handling in future.

Laurent Cruveillier conserved a nineteenth century ink rubbing and inked squeeze on paper (both the negative impression in white on black, and the positive impression in black on white). This depicts a stone inscription of Kokkala of the year 1058, Vikram Era (1000-1001 CE), completed under the authority of Sir Alexander Cunningham (1814-1893), who founded the Archaeological Survey of India. The two large sheets were highly unstable, weak and brittle, comprising several pieces of thin acidic paper which had been adhered together; and the positive impression showed extensive evidence of historic mould infestation and degradation. The sheets were also dirty and discoloured, and were creased from having been stored in a folded position.

We are extremely grateful to each of the conservation students for their dedication and hard work to conserve these important objects; each of which testifies in some way to the history of the cultures of Asia, and how these cultures have been understood and transmitted within Asian contexts and beyond. We are delighted that each of these objects have been stabilized, meaning they are better preserved and can be enjoyed, appreciated, and used by researchers today and in the future. So, once again, we extend a sincere “thank you” to each of the students, and to their tutors and supervisors at Camberwell College of Arts.