This week’s blog is written by Philip Jagessar who gives us an update on an interesting find he discovered within the Society’s map collections.

Among the Society’s eclectic collection of foreign language maps is this intriguing Ottoman map of the Hejaz Railway, which was built to reinforce control over its Arabian provinces and connect the holy cities of Mecca and Medina to the imperial capital Istanbul, via Damascus.

Proposals to connect Damascus to the Hejaz by rail were put forward as early as the 1860s, however it was only in the 1890s when plans to build a railway came to fruition. As it was ostensibly a project to improve access to the two most important sites of pilgrimage in Islam, Mecca and Medina, funding was sought from Muslims rather than foreign investors. A significant source of donations for the railway were wealthy middle-class Muslims in India.

Construction began in 1900 with a loan from the Ottoman Ziraat bank and the line reached Medina by 1908. However, progress was hindered by logistical issues and attacks by local Arab tribes wary of greater Ottoman authority over the region. The final stretch of the line from Medina to Mecca was cancelled to appease the Arab tribes who depended on camel routes used by pilgrims. The Hejaz railway famously became a target for T. E. Lawrence (‘Lawrence of Arabia’) and his Arab allies during the First World War, and it was abandoned after the conflict.

The official Ottoman map of the Hejaz Railway in the RAS collection is from 1904, so four years after the project had started. It shows the sections of the railway which had been completed and the sections under construction, planned, or altered. What makes this map fascinating is that some unknown person has transliterated the place-names and key geographical features labelled on the map and translated the title and legend from Ottoman Turkish to English. 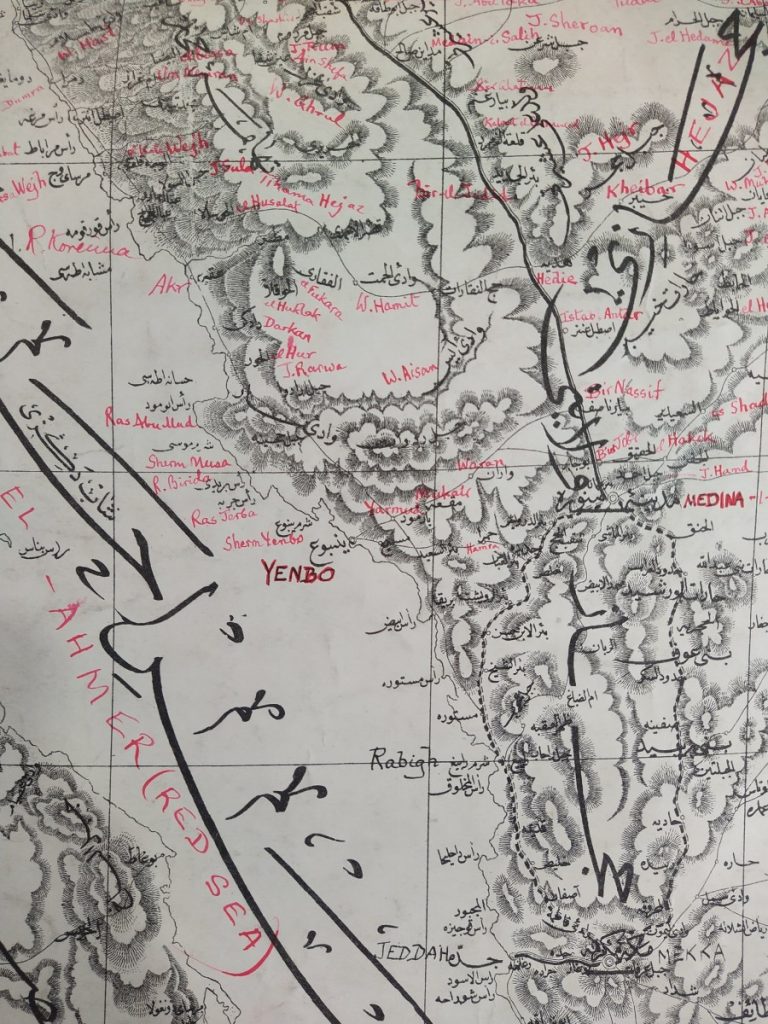 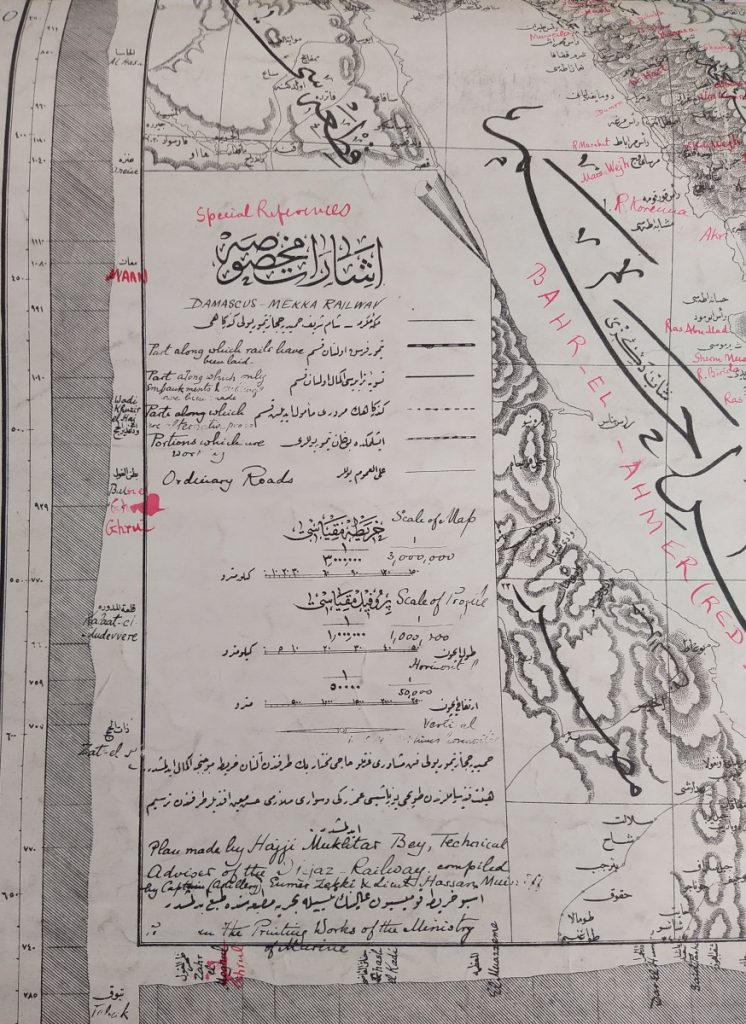 Close-up image of the maps showcasing the transliteration of the place names.

How the map came to be part of the Royal Asiatic Society’s collection is unclear. One possibility is that the unnamed translator was, or became, a member of the Society and left it as part of a larger donation of maps. Another possibility is that the map was acquired from the War Office (later the Ministry of Defence) which regularly disposed of older maps no longer considered useful, or ones of which it had multiple copies. Regardless of how this map was acquired, it does not seem out of place in the Society’s collection. The RAS, after all, is closely associated with the translation of texts and in this instance, a map.

This Tuesday (28th September), the Society welcomed members from the Travellers Club for an introduction to the Society’s history and collections. As some important figures from across the Society’s history were also members of The Travellers Club, it was fitting that some of the collections from these individuals were on display. These included an eighteenth-century Latin-Chinese manuscript dictionary, donated by Sir George Thomas Staunton, as well as a collection of early manuscripts exploring the structure of the Sinhalese language and script, donated by Sir Alexander Johnston. Staunton and Johnston were founding members (and Vice-Presidents) of the RAS, and were also members of the Travellers. In late-Georgian England, literary clubs and societies played an especially important role in the exchange of knowledge: many organizations with kindred goals and values to the RAS were founded in the 1810s and 1820s, and it was common to have overlapping membership. Scores of RAS members also joined other institutions, a noted example being Henry Thomas Colebrooke, the Society’s central founder and first Director, who belonged to the Travellers as well as a host of other learned institutions.

Today, our members continue to play an active role in intellectual networks, helping to shape public understanding and awareness of the history and cultures of Asia. As we look towards the Society’s bicentenary year in 2023, we hope to build upon our existing relationships with other learned clubs and societies, and invite all those interested in our charitable purpose to attend our events and learn more about our historic collections.

Readers are reminded that our first hybrid lecture will be held on the 14th October at 6:30pm, with a lecture by Professor Simon Kaner on ‘The Rehabilitation of Myth in the Archaeology of Ancient Japan and Korea’. If you would like to attend, please email mb@royalasiaticsociety.org to register, stating your preference for attending virtually or in person.