The Society congratulates Professor Francis Robinson (RAS President, 1997-2000 and 2003-2006, Chair of the Monograph Board and long-standing member of Council) who will receive the Sir Syed Excellence Award from Aligarh Muslim University on October 17th, as explained in the press release below.

The International Sir Syed Excellence Award recipient, Prof Francis Robinson’s research has been focussed on the Muslim World and he has authored 14 scholarly works including The Ulama of Farangi Mahall and Islamic Culture in South Asia (New Delhi: Permanent Black, 2001; London: Hurst, 2002; Lahore: Ferozesons, 2002) and Jamal Mian: The Life of Jamaluddin Abdul Wahab of Farangi Mahall, 1919-2012 (Karachi: Oxford University Press, 2018; New Delhi: Primus, 2020). His profound works carrying the fruits of academic rigour enable the reader to engage with the inner worlds of the Farangi Mahallis in general and that of Jamal Mian in particular.

He has extensively researched and produced work on the Islamic history of South Asia, in particular the role of Ulama (Religious Scholars) and Sufis (Islamic mystics).

He has explored the great movement of revival and reform in the Muslim world since the eighteenth century; the new ways of being Muslim which this movement developed; the responses of Muslims to Western dominance in their world since 1800 and the various forms of modernity which Muslims have fashioned.

Prof Robinson received a CBE in 2006 for services to higher education and research in Islamic history. He has served as President of the Royal Asiatic Society for two terms (1997-2000, 2003-2006) and was the Vice-Principal of Royal Holloway, University of London, from 1997-2004, serving as the head of the History Department from 1990-1996. Prof Robinson is also a visiting professor at Oxford University and the University of Washington.

Prof Gopi Chand Narang, the National Sir Syed Excellence Awardee, is an esteemed literary critic and scholar who writes in Urdu and English with a range of modern theoretical frameworks including stylistics, structuralism, post-structuralism and Eastern poetics.

Prof Narang holds the rare distinction of being a Professor Emeritus of the University of Delhi and Jamia Millia Islamia. He has also received the honorary Doctor of Letters degrees from three leading universities, namely the Aligarh Muslim University (2009), Maulana Azad National Urdu University (2008) and the Central University in Hyderabad (2007).

On Monday October 11th at 5pm, the Society’s Director will be participating in a webinar series organised by the Society for the Medieval Mediterranean. In the first event of the series, Dr Cailah Jackson (Oxford, Centre for Islamic Studies) will present research based on her book ‘Islamic Manuscripts of Late Medieval Rūm, 1270s–1370s: Production, Patronage and the Arts of the Book’ in conversation with Dr Patricia Blessing (Princeton University) and Dr Alison Ohta (Royal Asiatic Society).

Readers can register by clicking on the following link: https://theofed-cam-ac-uk.zoom.us/webinar/register/WN_u97QU6ndQnu6dG4inXoYvA

Please join us at 6:30pm on Thursday October 21st for the book launch of Professor Marc Baer’s ‘The Ottomans: Khans, Caesars and Caliphs’.

Recounting the Ottomans’ remarkable rise from a frontier principality to a world empire, historian Marc Baer traces their debts to their Turkish, Mongolian, Islamic, and Byzantine heritage. The Ottomans pioneered religious toleration even as they used religious conversion to integrate conquered peoples. But in the nineteenth century, they embraced exclusivity, leading to ethnic cleansing, genocide, and the empire’s demise after the First World War. 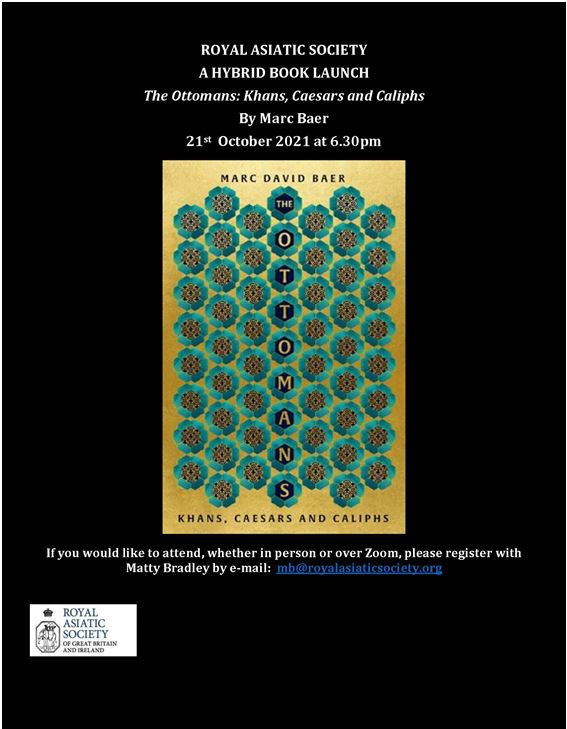 Readers are also reminded that on Thursday 14th October at 6:30pm, Dr Simon Kaner will be giving a lecture on ‘The Rehabilitation of Myth in the Archaeology of Ancient Japan and Korea’.

Please note that both of these events will be taking place in-person and virtually. To register for these, please email mb@royalasiaticsociety.org, stating your preference for how you would like to attend.