This Wednesday (12th May) marked the 178th anniversary of the birth of Thomas William Rhys Davids (1843-1922) who was a scholar of the Pāli language and founder of the Pāli Text Society.

In 1871 he was posted to Nuwarakalaviya, the ancient Sinhalese city of Anuradhapura, in Sri Lanka as Assistant Government Agent. During his time there, he became involved in the excavation of Anuradhapura, which had been abandoned following an invasion in 993 CE. He began to collect inscriptions and manuscripts and from 1870-1872 wrote a series of articles on his research for the Journal of the Ceylon Branch of The Royal Asiatic Society. A digitised version of the journal by Cornell University can be found here: https://babel.hathitrust.org/cgi/pt?id=coo.31924079097444&view=1up&seq=16

Rhys Davids played an active role in encouraging the British government to increase funding for the study of Indian languages and literature. During his time as Secretary and Librarian of the Royal Asiatic Society (1885-1904), he was involved in the work of the Oriental Translation Fund whose purpose was to publish translations of important works from across Asia. A number of letters are held within the Society’s archival collections between Rhys Davids and the Director of the fund, Forster Fitzgerald Arbuthnot which cover the fund’s general management.

When Rhys Davids died on the 27th December 1922, his obituary in the Society’s Journal stressed his commitment to the advancement of  the study of Indian languages and his clear vision in mapping the course to achieve this goal.

Please join us at 6:30 pm on Monday May 17th for a virtual book launch by Graham Hutchings (University of Oxford China Centre and University of Nottingham) entitled China 1949: Year of Revolution.

The year 1949 saw the dramatic collapse of Chiang Kai-shek’s ‘pro-Western’ Nationalist government, overthrown by Mao Zedong and his communist armies, and the foundation of the People’s Republic of China.

Shadowing both the leaders and the people of China in 1949, Hutchings reveals the lived experiences, aftermath and consequences of this pivotal year. One in which careers were made and ruined, and popular hopes for a ‘new China’ contrasted with fears that it would change the country forever.

Graham Hutchings is an Associate at Oxford University’s China Centre and an Honorary Professor at the University of Nottingham’s School of Politics and International Relations. He was Managing Editor at Oxford Analytica and prior to that, China correspondent of the Daily Telegraph, based in Beijing and Hong Kong. He is the author of Modern China: A Companion to a Rising Power (2000). 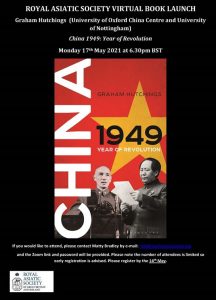 On Thursday 20th May at 6:30pm we will hold  a virtual book launch for Amanda Phillips’ Sea Change: Ottoman Textiles Between the Mediterranean and Indian Ocean.

Amanda Phillips is an Assistant Professor of Islamic Art and Material Culture at the University of Virginia. She is also the author of Everyday Luxuries: Art and Objects in Ottoman Constantinople, 1600–1800.

In the Ottoman Empire the sale and exchange of silks, cottons and woollens generated an immense amount of revenue and touched every level of society, from rural women tending silkworms to pashas flaunting layers of watered camlet to merchants travelling to Mecca and beyond. Sea Change explores the history of the Ottoman textile sector and argues that the trade’s enduring success resulted from its openness to expertise and objects from far-flung locations.

If you are interested in purchasing the book, the publisher is currently offering 30% off to readers. US and Canadian residents can do this by visiting www.ucpress.edu/9780520303591 and using the source code 17M6662 at checkout whilst UK and European residents will need to call John Wiley & Sons +44 (0) 1243 843291 to claim their offer. For other territories you will need to visit: https://www.ucpress.edu/contact/customer-service 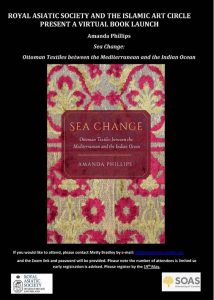 To attend either of these events, please email mb@royalasiaticsociety.org and the Zoom link and password will be provided. We look forward to seeing many of you there!