Over the last year, one of our volunteers has been working on the cataloguing of the personal papers of the former President and Director of the Society, Dr John Dennis Duncanson, O.B.E (1917-1998).

The collection contains draft manuscripts of Duncanson’s book, ‘Government and Revolution in Vietnam’. This publication was regarded as providing a clear overview of the political history of Vietnam and found its place on recommended reading lists at several Universities. Duncanson possessed valuable credentials for writing this book having served in the British Embassy in South Vietnam from 1965-1966 and as a member of the British Advisory Mission to the Saigon government (1962-1966). At this time, he gained considerable proficiency in spoken Chinese and studied Vietnamese. He was also a regular contributor on the BBC World Service and would often be found on TV debating the causes and development of the Vietnam War. For those that might be interested in learning more about this publication, an original copy of the book can be found in our Library collections.

The papers also contain  correspondence between Duncanson and several figures and bodies concerning the publication of the book and publicity, including the Royal Institute of International Affairs and Oxford University Press. The correspondence showcases the lengthy and complex processes involved when publishing a book, particularly with the Vietnam War being a highly debated topic around this time. Several difficulties presented themselves when Duncanson tried to publicise the book in America as one of the letters highlights the risk of the vigorous opposition he might face from university students and faculty members.

Following this publication, Duncanson turned his attentions to academia where he set up the Centre for South-East Asian Studies at the University of Kent at Canterbury. He was also an active member of the Royal Society for Asian Affairs and was on the Governing Body of the School of Oriental and African Studies (1975-1990). However, it was his role as President and Director of our own Society where he played his most influential role in his later years. During his three terms as Director (1977-80, 1986-89 and 1992-95) he managed most of the Society’s administrative work whilst helping to orchestrate a successful move of the Society’s premises from Queen Anne Street to 60 Queen’s Gardens. It is likely that these papers were deposited by Duncanson during his time as Director. The cataloguing of these papers is now complete and can be viewed on the Society’s Archives Hub page

Please join us on the 13th May at 6:30pm for a virtual lecture by Dr. Itay Noy (SOAS) on ‘India’s Adivasis and the Production of Inequality’. India’s Adivasi (indigenous) communities have often been noted for their degree of egalitarianism compared to the rest of Indian society. This lecture by Dr. Noy considers the ways in which mining operations and concomitant land dispossession can lead to new, salient forms of inequality in Adivasi society, which erode its egalitarian features.

To register, please email mb@royalasiaticsociety.org and the Zoom link and password will be provided. We look forward to seeing many of you there. 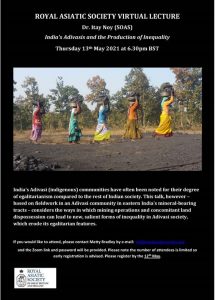 This Wednesday (5th May), the Society was pleased to welcome Dr. Jonathan Lawley who delivered an insightful lecture on his recent publication: ‘A Road to Extinction: Can Palaeolithic Africans Survive in the Andaman Islands?’ The lecture was well-attended with Dr. Lawley discussing the possible extinction of the Jarawa tribe and the impact that unbridled tourism is having on their way of life. This lecture has also been recorded and is now available to view on the Society’s YouTube page. 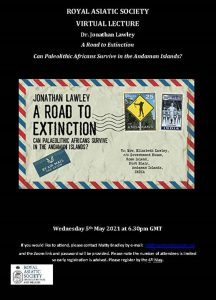