As well as researching the Society’s past, and its collections for the forthcoming exhibition at the Brunei Gallery, I am also researching the past anniversaries of the Society to present a paper at an archive conference in September. Entitled Celebration [in] Style: A Comparison of Anniversaries at the Royal Asiatic Society  it will look at previous major anniversaries and compare these with the current preparations for 2023. So, I’ve been delving into the archives to discover how the Society’s milestones have been commemorated.

The RAS immediately began the practice of holding an annual Anniversary General Meeting, mainly as a business meeting where the accounts were presented and new officers and Council members were elected, but also to present a report upon the Society’s activities. It is within this context that the 50th anniversary was commemorated in 1873 when the Report of the Council looked back at the 50 years of the Society’s existence. The report’s contents had been agreed at a Special Council Meeting in May 1873 and, on the day, were read by the Secretary, Julius Eggeling, a position he held before becoming Professor of Sanskrit at Edinburgh University in 1875. A rather subdued way of celebrating the golden jubilee of the Society.

However when it came to the centenary, the celebrations were far from muted. The early 1920s – the Roaring Twenties – as it has come to be known was a time of optimism and decadence for those who could afford the lifestyle. The Prince of Wales, a Vice-Patron of the Society, and who later became the short-reigning Edward VIII was part of the free-living, life-grabbing cohort.  The sense of joie de vivre could perhaps explain the lavishness of the some of the events particularly the banquet at the Hotel Cecil, which on its completion in 1896 was the largest hotel in Europe.

The banquet was charged at £1 – the equivalent of about £67 today – to include wine, cigars, coffee and liqueurs. Interestingly the hotel had an Indian room decorated in the ‘oriental style with blue and yellow tiles’ but the archives are silent as to whether this was the room used by the Society. There were 200 guests and the Japanese Ambassador was the guest of honour. Sadly the Hotel Cecil closed in the 1930s so history cannot be repeated in 2023, even if that was deemed appropriate.

The centenary also included a conference, receptions by the Prince of Wales at the Rooms of the Royal Society, and the Lord Mayor, a Government lunch at Claridge’s, a visit to the newly-established SOAS, and to Oxford and Cambridge universities with the conferment of Honorary Degrees on the Presidents of other Oriental Societies, as well as production of two special editions of the Journal. The conference itself was divided into four sections covering The Ancient Far East: China and Japan; The Ancient East; Semitic, Sumerian, Hittite and Egyptian; India including Persia and Ceylon; and Islam. The emphasis was on history including archaeology, ethnology, philology and religion, thus firmly in the past rather than current politics or conditions within Asian countries.

However this conference needs to be put within the wider history of Asian studies. The centenary, in 1923, came just five years after the cessation of the First World War. Prior to hostilities, an annual Congress of Orientalists had been held which had included a significant contingent from the Austro-Hungarian Empire and Germany. Post 1918, it was considered inappropriate to hold these congresses and an Entente Cordiale was set up between the societies in Britain, France, Italy, America, Japan and allied nations. Conferences were held in London in 1919, Paris in 1920, Brussels in 1921 and in 1922 the conference was merged with the centenary celebrations of Societé Asiatique. Therefore in 1923, the conference held to coincide with the centenary of RAS was that of the Entente. The Council Minutes for 14 November 1922 record the decision not to ask Germans and Austrians to any part of the celebration.

The main archival sources to discover more about the Centenary are the Council Minutes of the period which also include the Minutes for the Centenary and Entente Committee, the Anniversary General Meeting reports found within the Journal, the special editions of the Journal, a commemorative scrapbook containing memorabilia, and letters of congratulations from many other institutions. The majority of the planning was taken up with organising the Centenary Volume and in discussing which societies should be invited. The pictures shows the range of Societies asked and their representatives, though this was supplemented as the centenary approached. 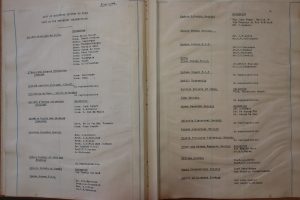 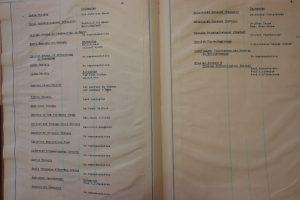 The Centenary Volume of the Journal published in 1923 had been envisaged as a large project based on Centenary Review of the Asiatic Society of Bengal, Calcutta 1885. In the end it was scaled down to include a history of the Society and an index of all articles that had been published by the Society in its history. The Centenary Volume Supplement, published in 1924, was a compilation of many of the papers given at the conference.

When looking through the archival material one gets a sense that powerful people were running the Society who could pull the right strings to make things happen – people who were involved in politics as much as academia. Of course, there were academics and these formed a significant section of the Society but the boundaries between scholar and politician were more blurred. For example, the President at the centenary was the Rt. Hon. Lord Chalmers, a civil servant who had been raised to a barony in 1919. Chalmers has a chequered reputation in Asian history – he notoriously was Governor of Ceylon (Sri Lanka) during the Hundred Days of Terror in 1915 and was recalled to Britain for his part in it. However, he was also a competent Pali scholar and, within his lifetime, translated over 2000 Buddhist texts.

The Anniversary report gives an impression of a vibrant society that had known ‘stability, expanse and influence’ for the previous thirty years. They had been instrumental in the founding of SOAS with members taking positions on the teaching staff. Besides an increasing number of university positions in Europe one can sense also that learned societies had a vital role in the promotion of Asian studies. And so our Society has continued to survive and flourish for another 99 years. Like all institutions it has had its ups and downs but we are looking forward to celebrating the bicentenary – in a different style – in 2023.