Campbell Thompson donated two canisters of film to the RAS. The footage dates from the late 1920s/early 1930s and shows excavations in Iraq at the mound of Kouyunjik, scenes in the village of Nebi Yunus, across the Khosr river from Kouyunjik within the ancient city boundaries of Nineveh, and scenes in the city of Mosul, across the river Tigris from Nineveh. 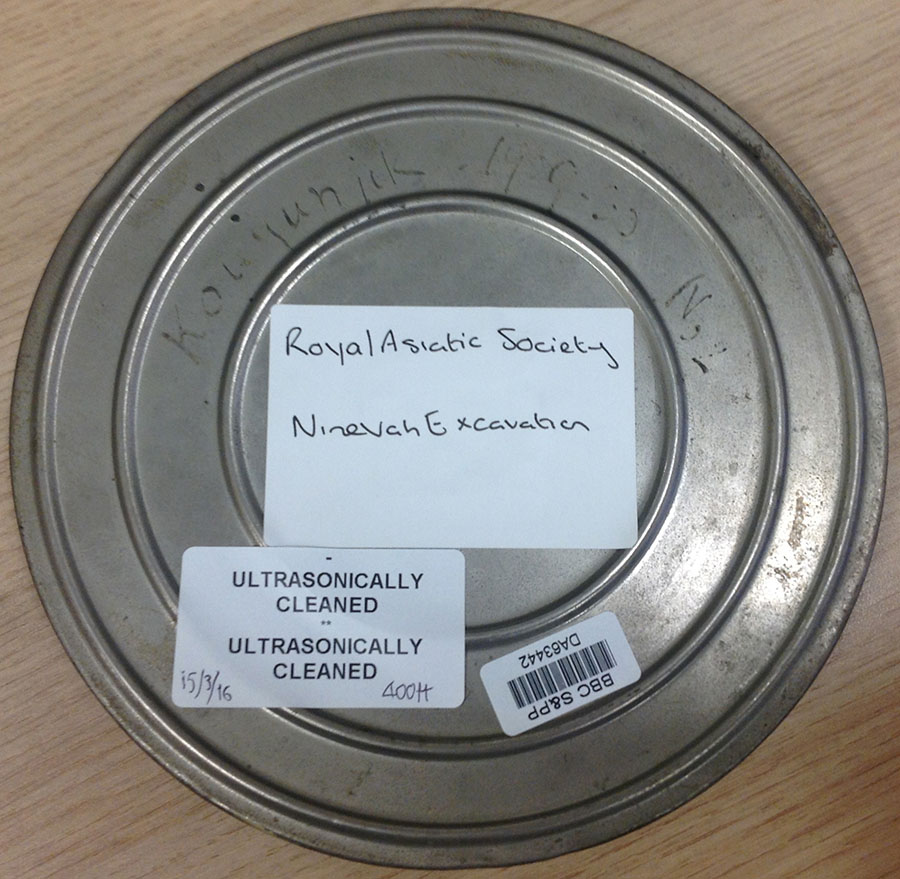 In 2016 Amara Thornton and Michael McCluskey undertook the process of digitising the footage. Amara and Michael were part of the UCL project called Filming Antiquity, which had been funded to digitise and present the 1930s excavation films of archaeologist Gerald Lankester Harding. They gave a joint presentation of the footage at the RAS on January 26th 2016 at the event “Excavating the City: Reginald Campbell Thompson’s Moving Images of Mosul” . Campbell Thompson’s archaeological life was explored alongside his work as a writer and as an amateur film-maker documenting cities in transformation – both ancient and modern.

As a young Assistant Keeper (2nd Class) in the Department of Assyriology and Egyptology at the British Museum, Campbell Thompson joined his BM colleague Leonard W. King on site at Nineveh in early 1904, remaining in Iraq for a year directing excavations at Nineveh.  He returned to the site in 1927 to direct the British Museum’s renewed excavations there.  The remains of the 9th century palace of the Assyrian king Ashurnasirpal were found during this productive initial season, leading Campbell Thompson to begin actively fundraising for a more intensive programme of work at the site.

Campbell Thompson was intensely interested in the customs, culture and biographies of the people who worked with him and for him on site – this is clear in his war-time ‘memoir’ A Pilgrim’s Scrip, which charts his initial experience of Nineveh in 1904.

Campbell Thompson directed four seasons at Nineveh – the initial 1927/28 season was followed by three in succession – 1929/30, 1930/31 and 1931/32.  He focused on the mound of Kouyunjik, the location of Ashurnasirpal’s palace, and also sought evidence of a temple of the Assyrian goddess Ishtar, which was eventually discovered during the 1930/31 season.

Campbell Thompson’s wife Barbara joined him on site for all four seasons, credited in the official publications with her work on the “domestic” arrangements.  A varied cast of team members included two friends of Barbara’s – Miss Isabel Shaw (1929/30) and Miss M. Hallett (1930/31) – as well as Richard Hutchinson (1929/30) and Robert W. Hamilton (1930/31) and Max Mallowan and Agatha Christie (1931/32), who dedicated her story Lord Edgware Dies to “Dr and Mrs Campbell Thompson”.  Of the Iraqi members of the excavation, Campbell Thompson specifically credited his overseers Yakub and Abd-el-Ahad, as well as Mejid Shaiya, whom Campbell Thompson referred to as “my old henchman”.

Today the film can be viewed in full on our Youtube channel: