Anniversary of the Inauguration of the RAS:

This Monday (15th March), marked the 198th anniversary of the inauguration of the Royal Asiatic Society of Great Britain and Ireland. The Society was founded on the afternoon of Saturday 15th March 1823 at a meeting held in the now demolished Thatched House Tavern on the West Side of St James’ Street in London.

The Society was envisioned to act as the British counterpart to the Asiatic Society of Bengal which had been founded in 1784 by the philologist, Sir William Jones, with the aim of furthering the cause of Oriental research within India and surrounding regions. It would be the labours of Henry Thomas Colebrooke (1765-1837), the former President of the Calcutta-based parent Society, that would allow plans for the Great Britain and Ireland branch to progress. Colebrooke had served in the East India Company for 32 years and is often regarded as the ‘first great Sanskrit Scholar in Europe.’ The Society is fortunate to hold a small collection of personal papers relating to Colebrooke which provide a fascinating insight into his character and the inauguration of the Society. Other material that has been donated to the Society by Colebrooke include everything from books on the history of Indian philosophy and mathematics to drawings of Indian agricultural implements and, perhaps rather unusually, fishing nets and drinking vessels.

It would be Colebrooke that arranged a preliminary meeting at his house on the 8th January 1823, the purpose of which was to ‘consider the expediency of instituting a Society for the encouragement of science, literature and the arts in connection with India, and other countries eastward of the Cape of Good Hope.’ Fifteen people attended this meeting with a list of these highlighted in the proceedings below. They include the Society’s Vice-Presidents, Sir Alexander Johnston and Sir George Thomas Staunton.

Other meetings would follow, and on the 16th January a prospectus for the Society was approved, whilst on the 15th February King George IV was asked to become patron. At this point the Society was named ‘The Asiatic Society of Great Britain’, with ‘Ireland’ added later. However, once the King accepted the patronage of the Society in June 1823, he granted the title of ‘Royal’ to the Society with the name remaining unchanged over the last 198 years.

This charter would be ‘for the investigation of subjects connected with and for the encouragement of science, literature and the arts in relation to Asia.’ There was some opposition to this charter by the Linnean Society as they wanted natural history to be excluded from the Society’s aims. However, these concerns soon subsided and members of the Society would grow from 25 original members to 324 within the first year.

The politician Charles Watkin Williams-Wynn was invited to become the first President of the Society, which he accepted. This choice could perhaps be deemed surprising due to the leading role that Henry Colebrooke had played in the Society’s creation. However, Colebrooke’s ill health is often cited as the reason for not taking up the presidency. Nevertheless, the efforts of Colebrooke were recognised by the members of the Society who elected him as Director ‘to mark their desire to retain his name on their governing body.’ He would continue to preside as the Director of the Society until his death aged 71 in 1837.

A reminder that our second virtual Collections Evening will be taking place on Thursday 25th March at 6:30pm with the opportunity to hear from three speakers who have been undertaking work on our collections, despite the challenges of the past year.

Lily Colgan (Royal Asiatic Society) will reflect on her experiences cataloguing the diverse archival collection of the West brothers, five railway engineers who compiled detailed notes on the Kanheri Caves near Mumbai, and other sites, in the second half of the nineteenth century.

Jung Min (Royal Asiatic Society) will introduce the history of RAS Korea and discuss the importance of textual sources for documenting its long and storied history.

I will also speak about two cataloguing projects I have been working on since starting at the Society, the Oriental Translation Fund and Abraham Poliak papers. This will also involve reflecting on the challenges presented by limited access to the physical collections during the pandemic.

This event is already proving popular so early registration is advised. To register, please contact mb@royalasiaticsociety.org. We look forward to seeing many of you there! 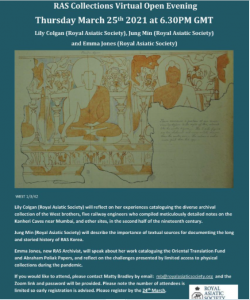