This week’s blog post is kindly written by Mathilde Renauld who is currently working at the National Gallery of Ireland as a Paper Conservator. Mathilde previously completed a project for the Society as part of her Masters in Conservation at Camberwell College of Arts where she carried out treatment on a 19th century Pilgrimage Scroll. This project formed the basis for a recent article that has been written by Mathilde and Professor Ulrich Marzolph and is now published in The Journal of the Royal Asiatic Society.

Conservation is a multi-disciplinary profession which aims to physically preserve cultural heritage to facilitate access, display, and research. I undertook a Conservation MA, specialising in Fine Art on Paper at Camberwell College in London, which gave me the opportunity to validate my knowledge and skills with a final conservation project. For this, I undertook the treatment of an object from the Royal Asiatic Society collection.

The object suggested for treatment by the Society’s  librarian, Edward Weech, is a scroll depicting Shi’aholy sites, starting at Mecca and ending at Mashhad, with an added illustration of Alī’s servant and horse, Qanbar and Duldul. Yet uncatalogued, the scroll was donated in or after 1857 to the Royal Asiatic Society, based on a handwritten inscription on the verso. It may have  been produced in Karbala, circa 1800-1850. To better understand the item, in order to aid my decision-making in its treatment, I contacted Professor Ulrich Marzolph, whose expert knowledge in such objects was invaluable and led to a fruitful collaboration and subsequent publication.

The scroll consists of irregular panels of paper adhered along their short edges with animal glue, with  an overall dimension of 253x2627mm. Illustrations are painted in black ink, organic and inorganic colours in gum arabic, and metallic gilding; there are inscriptions in black ink (Persian), iron-gall ink (English transcriptions) and graphite (numbering)

The scroll was not accessible for viewing without risking further damage. The condition it was in came both from the inherent vice of instable materials used in its making, and its previous storage and handling. Immediate issues were: 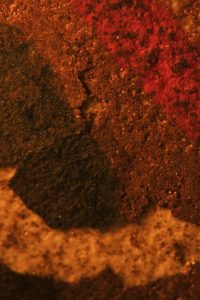 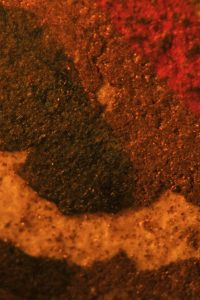 The aim of the conservation treatment was to remediate these issues and to stabilize the object for occasional handling and exhibition.

Treatment first focused on consolidating the flaking media, by re-introducing an adhesive between the pigment and the paper support. This is to ensure no further losses would take place with handling. The adhesive, Aquazol, was chosen based on its flexible mechanical properties, allowing for rolling of the scroll.

Many paper repairs were also necessary to support fractures and brittle areas which were likely to also break with further handling. This was done by adhering a supportive tissue to the back of affected areas to locally increase mechanical strength. As copper ions are water-soluble, limited moisture could be introduced in the repair stage to prevent furthering the damage areas. This was remediated by using remoistenable tissue, a tissue pre-coated with adhesive which is allowed to dry, and is re-activated with minimal moisture before use. Both of these treatment options required prior testing of materials used in order to ensure their ethical, functional, and aesthetic suitability.

To ensure proper protective storage of the scroll, each section was rolled onto supportive cores within a bespoke box to house both side-by-side. While re-joining the two sections was an obvious treatment choice for better legibility and to return the scroll to its original form, keeping them separate was more practicable to aid handling, which was agreed with the Royal Asiatic Society. To prevent future over-handling of the scroll, high-quality photographs of each panel were delivered to the RAS together with a printed-out visual guide and handling instructions.

Formerly an uncatalogued object in an unstable condition, the scroll is now safely accessible for further research on its identity and history.

The article, ‘An Illustrated Shiʿi Pilgrimage Scroll in the Collections of the Royal Asiatic Society’, which was written by Mathilde and Professor Ulrich Marzolph, is now available to read for RAS members on First View

To view this article, members are reminded to login to the RAS website with their unique username and password to view the Journal.

We would like to thank Mathilde for her contribution to this week’s blog post. This week’s virtual Collections Evening, which celebrates ongoing work with the collections during the pandemic, is also a good opportunity to refresh our memory about similar occasions in years past, when Mathilde joined us at Stephenson Way to describe her work with  this pilgrimage scroll: https://royalasiaticsociety.org/celebrating-our-collections/

We look forward to more exciting projects in the months and years to come.