Director Presents on Textiles and Manuscripts in the Islamic Tradition:

The Society’s Director, Alison Ohta took part in a virtual workshop on the 2nd and 3rd of June. The workshop was titled “Textiles in Manuscripts: Cross-cultural Trade, Craft Production, and Influence in the Art of the Premodern Book”, and is part of The Book and the Silk Roads (BSR) project (2019–2021), a large-scale interdisciplinary project that aims to tell the story of the book in a new way.

Global book history is often represented as a narrative of technological and societal progress — from the tablet and scroll to the biblical codex of late antiquity, to the early modern printing press of the Gutenberg Bible, to today’s “Digital Age.” The BSR team, however, works across boundaries of geography, institution, and discipline, employing a distinctive methodology that brings together humanities researchers, digital librarians, scientists, conservators, rare book librarians and curators, as well as local and diasporic community members for whom these books represent a precious part of their cultural heritage. By combining different forms of expertise, the project will develop a rich and global history of the book, aiming for interdisciplinary and collaborative breakthroughs in the areas of codicology, conservation and heritage science, and the protection and study of vulnerable and little-understood materials.

The BSR Textiles in Manuscripts workshop examined the vast use of textiles in manuscripts, both practical and ornamental: their uses within bindings, as wrappers, enclosures, and covering, as cloth used to protect images, and as symbolic or talismanic artefacts. Workshop sessions focused on the use of textiles in Armenian, Chinese, Ethiopian, Islamic, Kashmiri, and Syriac manuscripts from the middle ages through to the early modern period. The Director with Paul Hepworth, an independent conservator of Islamic manuscripts and textiles based in Istanbul, presented on the use of textiles in Islamic manuscripts, discussing examples from the Mamluk and Ottoman traditions, as well as others from across the Islamicate world. They examined the use of textile doublures (cloth inside the covers), on covers, wrappers, and cases. The presentation expanded conversations explored in a pre-workshop video by Islamic book conservator Dr. Karin Scheper (University of Leiden Libraries) and Islamic intellectual history scholar and expert on Yemeni manuscripts, Dr. Sabine Schmidtke (Institute for Advanced Study, Princeton). Recordings of these presentations and others are available on the workshop website, with Ohta and Hepworth’s video posted by mid June: https://booksilkroadstextiles.artsci.utoronto.ca/

The Director illustrated her talk with an example from the RAS collection of a fine binding of a Bustan of Sa’di copied in Herat in 1520 by Sultan Nur, a well-known calligrapher, presented to the Society by Lieut. Colonel Doyle on the 15th March, 1834. It was later rebound in India in the 19th century.  This fine partial red leather  binding contains a border of stamped cartouches and floral scrolls surrounding a central panel of dark green velvet and is an example of how techniques and materials were adopted from other binding traditions. The use of velvet is also found on bindings made for the Ottoman Sultan Mehmet II (r. 1451-1481) and was specifically used for binding documents related to religious endowments made by the ladies of the Ottoman royal family.

The lecture was well attended and Professor Martin provided interesting insights into Colledge’s achievements in ophthalmology as well as around his mental health in this period.

This lecture will also be able to view on the Society’s YouTube channel in the coming days.

Dr. Olivieri will discuss the recent excavations which have taken place in the town of Barikot, in the middle course of the Swat River in Pakistan. Between 700 and 1000 CE, the ancient urban site, known in Greek and Latin sources as Bazira/Beira, became a major Śāhi centre with palatial and cultic structures, known as Vajira in epigraphic records of the end-10th century. Excavations on the acropolis revealed a large Brahmanical temple built by the Shahis of Kabul (c. 700 CE) and expanded under the so-called Hindu Shahis. During the surface research three more Brahmanical temples were documented which will also be discussed.

Dr. Olivieri is director of the ISMEO Italian Archaeological Mission in Pakistan and has been working in Swat for more than thirty years. His principal interests include excavation, survey, and heritage management methodologies. In 2017 he was awarded with the Sitara-i-Imtiaz of Pakistan for his three decades of archaeological work in Swat. He was Director of the ACT-Field School Project in Swat from 2011 to 2016, which, amongst other important achievements in the field of training, archaeology and restoration, managed to rebuild the Swat Museum, as well as to restore the colossal Jahanabad Buddha, both damaged during the insurgency. 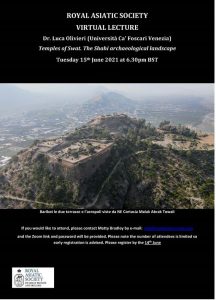 On Thursday June 17th we will also be holding a virtual book launch of Dr. Marcus Milwright’s ‘The Queen of Sheba’s Gift: A History of the True Balsam of Matarea’.

Using written sources, visual data and archaeological material, Marcus Milwright reconstructs the fascinating cultural history of the balsam tree from Jericho and En-Gedi to Egypt, and from ancient times to the 17th century. Dr Milwright also addresses the symbolic associations of balsam and the site of Matarea (where the last balsam tree died in 1615), the distribution of products from the tree through trade and diplomacy, and the applications of these products in medicine, ritual and the domestic environment. He also establishes links with resin-producing trees from the Arabian Peninsula and the Horn of Africa.

Dr. Milwright is currently a Professor of Islamic Art and Archaeology in the Department of Art History and Visual Studies at the University of Victoria, B.C., Canada. He is also author of The Fortress of the Raven: Karak in the Middle Islamic Period (2008), An Introduction to Islamic Archaeology (EUP, 2010) and The Dome of the Rock and its Umayyad Mosaic Inscriptions (EUP, 2016).

Please note that the Edinburgh University Press website is currently offering a 30% discount on purchases of the book if you apply the code EVENT30 at checkout. 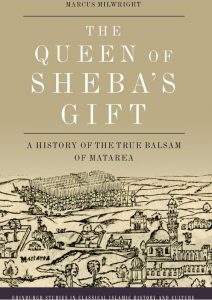 If you are interested in attending either of these events, please email mb@royalasiaticsociety.org and the Zoom link and password will be provided. We look forward to seeing many of you there!