On Thursday 27th May, the Society’s AGM was held over Zoom. Professor Stockwell stepped down as President having completed his term and Professor Sarah Ansari was elected making her the first woman President of the RAS.

We would like to thank Professor Stockwell for his wisdom, humour and direction in guiding the Society through the pandemic which posed a number of challenges. Professor Stockwell has been a Fellow of the Society since 1990,  has served on Council since 1998 with the prescribed breaks and  has been President on three occasions (2000-2003, 2006-2009, 2018-2021). He was part of the Strategic Committee in 2000 which set the Society on a new path with the move from Queen’s Gardens to Stephenson Way. His commitment to the Society and its governance is impressive and on occasion he remarked that he kept the Bye-laws by his bedside for consultation! He remains, of course, an active member of the Society and will continue on Library Committee.

The Society welcomes Professor Sarah Ansari as President who is well-known to many as the Honorary Editor of the Journal, a position that she has held for over 20 years. It is now time for change and having steered the course of the Journal so successfully throughout this period, the Society is in very capable hands. We congratulate Professor Ansari on her Presidency and look forward to working with her in her new role. ​

Please find below a summary of Professor Stockwell’s address at the Anniversary General Meeting.

Since the previous AGM (postponed from May to October on account of the pandemic) irregular or prolonged COVID closures have resulted in staff working from home or restricted hours.

Nonetheless, the calendar has been brimful with ‘virtual events’: lectures, discussions and book launches. Communications with fellow societies across the world have been reinforced and links have been forged with others. Council has upgraded the Society’s audio-visual system to improve the staging of events and also to attract post-pandemic lettings at 14 Stephenson Way.

If you have missed events, recordings (both sight and sound) are available on the Society’s YouTube page.

The reading room has been closed during periods of lock-down. Whenever possible scholars seeking specific material may be granted access to the Society’s collections by prior arrangement. Working from home, Ed Weech (Librarian) and Emma Jones (Archivist) have continued projects to digitise material and catalogue archives. The expanding Digital Library provides a worldwide audience free access to the Society’s archives, manuscripts, artwork and photographs. Between January and March this year, the Digital Library received over 3,000 visits from 2,320 users, who viewed over 10,000 pages, a 50% increase on the same period last year. ‘Hits’ came from USA, the UK, the Indian sub-continent, southeast Asia and China.

Conservation projects, which depend to a great extent on our invaluable volunteers and which are largely conducted on site, have had to be suspended. Nonetheless, the Librarian and Archivist have arranged well-attended ‘virtual collections evenings’ via Zoom when volunteers and graduate students have presented projects and illustrated them with images from the collections.

The quarterly Journal is central to the Society’s commitment to the promotion and publication of scholarship. These are challenging times for publication in the humanities and we are fortunate in having the Cambridge University Press as publisher.

We have also been fortunate in our editors. Professor Sarah Ansari, who succeeded Professor David Morgan at the start of the millennium, was elected President unopposed at the recent AGM. Professor Ansari has generously volunteered to continue as editor of JRAS until the end of this calendar year by which time her successor will be in post. A selection panel has been established consisting of myself (as out-going President), a representative of Cambridge University Press and four eminent scholars in the field of Asian studies.

For making all this happen we are immensely grateful to:

With all good wishes,

Following Professor Ansari’s election as President, the Society has begun the search for a new Editor of the Journal. The appointment will be made through an open competition and the advertisement for this can be found here.

Please will you bring this to the attention of anyone who might be interested in applying for this position. Informal enquiries can be made over email to Gordon Johnson gj206@cam.ac.uk, chair of the Publications Committee. ​

Please join us at 6:30pm on Tuesday 8th June for a Zoom lecture by Professor Stephen Martin (Honorary Professor at the University of Chiang Mai Medical School) on ‘George Chinnery’s portrait of Thomas Richardson Colledge at the Macau Eye Hospital’.

Thomas Richardson Colledge was the founder of modern ophthalmology in Canton. The most revealing sources on him and his medicine are a biography by his daughter Frances and a painting by George Chinnery. Behind these are some remarkable insights about Colledge’s relationships, his ophthalmic practice and the mental state of a talented artist who spent most of his life in India and China.

As well as being Honorary Professor at the University of Chiang Mai Medical School, Stephen Martin is also a Fellow of the Society. 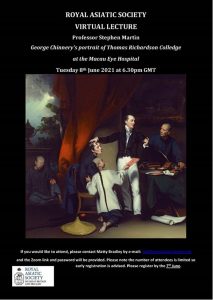 If you would like to attend, please email mb@royalasiaticsociety.org by the 7th June. We look forward to seeing many of you there!