Tuesday (15th June) marked the 256th anniversary of the birth of the former President and founder of the Society, Henry Thomas Colebrooke (15th June 1765 -10th March 1837).

Colebrooke was born in London and was the third son of Sir George Colebrooke, 2nd Baronet and Mary Gaynor of Antigua. In 1782, he was appointed to a writership in the East India Company in Calcutta. In India, Colebrooke developed an interest in Sanskrit and taught himself the language. This resulted in him translating the ‘Digest of Hindu Laws’ which had been left unfinished by Sir William Jones and two treatises on Hindu inheritance law and procedure; the Mitakshara of Vijnaneshwara and the Dayabhaga of Jimutavahana. Colebrooke’ s scholarly interests led to him taking an active role in the Asiatic Society of Bengal which had been founded in 1784 by Sir William Jones with the aim of furthering research on India and surrounding regions. He was elected President in 1807. After returning to England in 1814, Colebrooke believed Britain needed its own Asiatic Society to provide a forum for those interested in the history, languages, cultures and religions of Asia to meet and exchange ideas. This resulted in a preliminary meeting being arranged at Colebrooke’ s house on the 8th January 1823 where the foundations for the Society were established. Colebrooke played an active role in the Society’s early years and served as Director until his death aged 71 in 1837.

The Society is fortunate to hold a small collection of personal papers relating to Colebrooke. This includes books on the history of Indian philosophy and mathematics, drawings of Indian agricultural implements and, perhaps rather unusually, fishing nets and drinking vessels.

His autograph and memoir book contains handwritten and printed material relating to his correspondence with Nathaniel Wallich who was Superintendent of the Botanic Garden in Calcutta. These letters reveal Colebrooke’ s research interests at the time and he discusses sending seeds, plants and geological specimens to England and South Africa.

To learn more about Henry Colebrooke and his interests, the catalogue entry for the collection can be found here.

This week, the Society held two virtual events. On Tuesday evening (15th June), Dr. Luca Olivieri presented a lecture on the ‘Temples of Swat: The Shahi archaeological landscape’ which discussed the recent excavations at Barikot in the Swat valley, Pakistan. Yesterday evening (17th June), the Society also presented a book launch for Dr. Marcus Milwright’s ‘The Queen of Sheba’s Gift: A History of the True Balsam of Matarea’. Both events were well attended and the recordings will be available on the Society’s YouTube channel in the coming days.

Dr. Lambourn will discuss her work on a monograph project which is aiming to integrate several forgotten (or at best neglected) frontiers of the early Islamic world into mainstream Islamic history.

Elizabeth Lambourn is currently a Reader in South Asian and Indian Ocean Studies at De Montfort University in Leicester. Her research particularly focuses on the identification and study of new material archives and on Indian ocean materialities.

If you would like to attend, please email mb@royalasiaticsociety.org and the Zoom link and password will be provided. 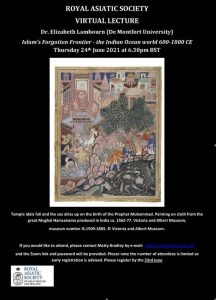