It is with great sadness that we share the news of Jerry’s passing. Jeremiah Losty was for 34 years an outstanding curator of the Indian collections at the British Library: first as Assistant Keeper of Sanskrit at the British Museum’s Department of Oriental Manuscripts and Printed Books and subsequently as the Head of Prints, Drawings and Photographs at the former India Office Library. He retired in 2005. As an art historian he developed a wide range of expertise, publishing extensively on illustrated Indian manuscripts and on painting in India by European as well as Indian artists. His books include the ground-breaking The Art of the Book in India (1982) and Calcutta City of Palaces (1990). He worked extensively on the Mewar Ramayana volumes in the British Library producing the exhibition and accompanying catalogue The Ramayana: Love and Valour in India’s Great Epic – the Mewar Ramayana Manuscripts (2008). In more recent years, Jerry co-authored Mughal India: Art, Culture and Empire (2012) and authored Sita Ram: Picturesque Views of India (2015), A Mystical Realm of Love: Pahari Paintings from the Eva & Konrad Seitz Collection (2017), and Court and Courtship: Indian Miniatures in the Tapi Collection (2020).

Yesterday evening (Thursday 14 October) the Society welcomed Professor Simon Kaner (University of East Anglia) to lecture on “The Rehabilitation of Myth in the Archaeology of Ancient Japan and Korea”. After an overview of the history of archaeology in Japan and Korea, Professor Kaner provided a summary of recent developments in the field. This highlighted some exciting new discoveries, with particular emphasis on the evidence for cultural interaction and exchange between the two territories in prehistoric and ancient times.

The hybrid lecture took place in front of an in-person audience, while also being enjoyed “live” by online attendees who joined the lecture via Zoom. This marked a new beginning for the Society’s public programme, as it was the first time since before the pandemic that we have been able to welcome public guests to a lecture at Stephenson Way. But we are very pleased that we now have the tools to greet online attendees at the same time. After his lecture, Professor Kaner kindly answered questions that were submitted from the audience in the room as well as via Zoom.

We have a busy programme of events coming up, including hybrid and online-only events. The next event takes place on Thursday 21 October, which is a book launch for Marc Baer’s The Ottomans: Khans, Caesars and Caliphs, with the author in discussion with Philip Mansel. If you would like to attend, please email Matty Bradley at mb@royalasiaticsociety.org. 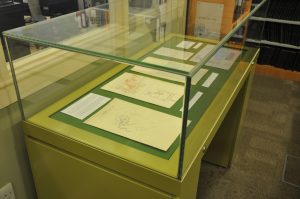 The Society’s Reading Room is open by appointment three days per week (Tuesdays, Thursdays, and Fridays). In recent weeks, we have also been able to start welcoming group visits back to the Society to see treasures from our collections. With more people coming to the Society in-person once again, we are delighted that visitors can now enjoy a new display of archival material in the Reading Room. This has been curated by RAS Archives Volunteer Lily Colgan, and emanates from her work cataloguing the papers of the West brothers, five railway engineers who worked in India’s Maharashtra region during the mid to late 1800s. As Lily explained in a previous blog post (https://royalasiaticsociety.org/celebrating-our-achievements/):

Their father was the owner of several cotton presses in India. Edward West became the Superintendent in the mid 1840’s at the largest of these cotton presses, in Mumbai. Edward, who was later known for his work in Linguistics and Zoroastrian studies, became a Chief Engineer of the Great Indian Peninsula Railway in 1852. All five of these brothers became railway engineers and worked predominately on the Bhor Ghat mountain passage. The result is a meticulously organized and rich combination of topographical drawings, maps, floor plans, copies of wall paintings, field notes, papers, sketches, correspondence and rubbings, as well a semblance of an autobiographical account of the brother’s time in India.

We would like to thank Lily for preparing such an interesting and representative selection of archival material. We hope many of you will come to see this collection in the coming weeks and months. The catalogue of the West papers can be explored online at https://archiveshub.jisc.ac.uk/search/archives/f948b86a-80d3-31e9-a199-3015c6e97c1b.