There’s a chill in the air as we enter the second half of Autumn, but the Society’s events programme is running at full steam with several events planned between October and November. Many of these are being run as hybrid events which gives attendees the option to join virtually or in-person.

Please join us at 6:30pm on Thursday 4th November for our first joint hybrid event with the Levantine Heritage Foundation. This will include a lecture by guest speaker Michael Cottakis on ‘Echoes of the Levant: Salonica and Smyrna in the Aegean Near East’.

Michael Cottakis is a historian based at LSE, and founder and director of the international think tank, 89 Initiative, whose eight branches across the UK and Europe seek to develop an urban, transnational, approach to politics.

To register, please email mb@royalasiaticsociety.org stating your preference for attending virtually or in-person. 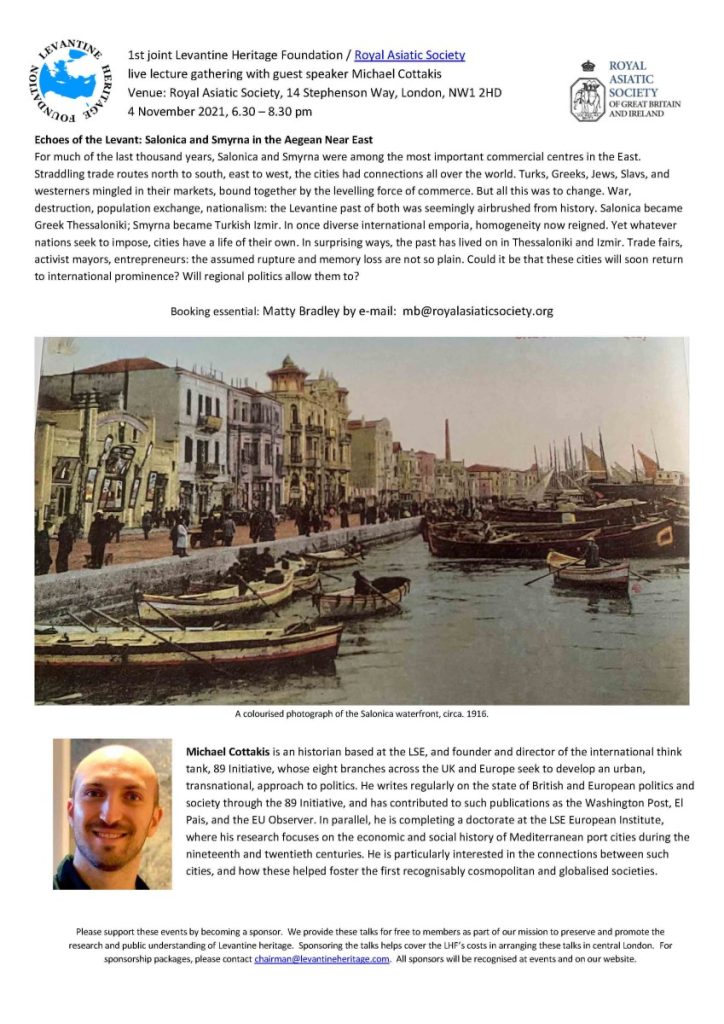 A reminder that next Thursday evening (28th October) at 6:30pm the Society will be welcoming Professor Dionisius A. Agius for the launch of his book ‘The Life of the Red Sea Dhow: A Cultural History of Seaborne Exploration in the Islamic World’.

This launch will be a hybrid event with attendees reminded to state their preference for attending in person or virtually when registering. 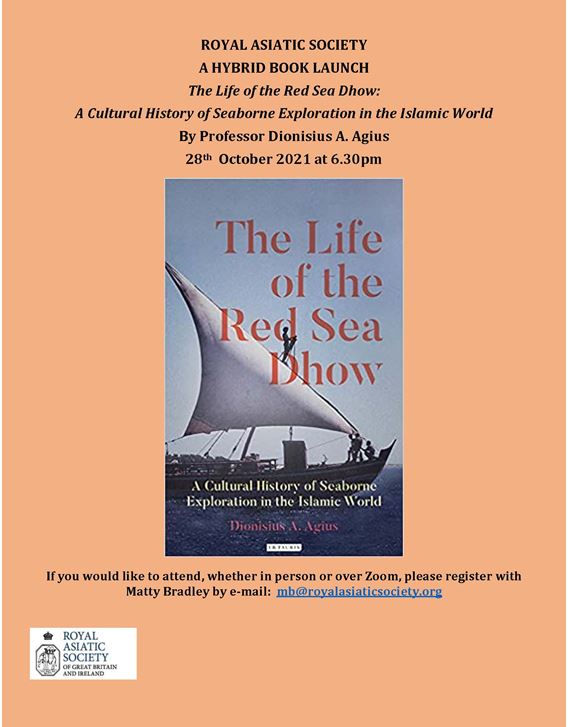 Iran Under the Seljuks and Mongols

Between Monday 8th and Thursday 11th November, Professors Robert and Carole Hillenbrand will be teaching a specialist art short course on ‘Iran Under the Seljuks and Mongols’. This will take place at the Brunei Gallery Lecture Theatre at SOAS.

The course will investigate how Iran’s geographical position, straddling the area between East and West Asia, with links to the world of the Inner Asian steppe to the north and the Indo-Pakistan sub-continent to the south, has determined both the ideas that it has received and, reciprocally, those that it has transmitted across Eurasia, from Greece in the west to China and Japan in the east.

For those interested in registering, there will be a charge of £600 to pay upon booking. To book your place and for further information please click here.

Indonesia and the Malay World has recently published a special issue on the articles by the late Russell Jones on the paper and watermarks of Malay manuscripts, guest edited by Farouk Yahya. As the Introduction explains:

“This special issue of Indonesia and the Malay World gathers together a selection of the works of Russell Jones (1926–2019) on the paper used for copying Malay manuscripts and their watermarks. Russell’s ground-breaking work transformed the way in which they were viewed and approached, and remain of fundamental importance today. This volume thus aims to act as a guide for scholars, students, librarians and archivists in their work in dealing with manuscripts. We see it as a tribute to one of the founders of this journal, for his contribution and tireless efforts in this important field.”

Information about the special issue is available here. It includes an article on one of the Society’s manuscripts, RAS Maxwell 93, most of which comprises the Malay text Bidāyat al-mubtadī bi-faḍl Allāh al-Muhdī. The special issue also contains many other references to manuscripts in the Society’s collections, and its comments on manuscript cultures, production, conservation, and dating ensure it makes for fascinating reading.

JSPS has launched a call inviting applications from UK-based early career scholars in the humanities and social sciences for the Japan Society for the Promotion of Science (JSPS) Postdoctoral Fellowships. The British Academy is an overseas nominating authority for this fellowship scheme, which is for scholars in the UK who are at an early stage of their career and wish to conduct research in Japan for a period of 12-24 months. The scheme provides subsistence funding as well as a settling-in allowance and a return air ticket. The deadline for applications is the 8th December.

For more details including how to apply please click here.