I recently visited Hong Kong to participate in a conference, Crossing Borders: Sinology in Translation Studies, organized by the Department of Translation and Research Centre for Translation at the Chinese University of Hong Kong, which took place between 13 and 15 June. I was invited to the conference to talk about Thomas Manning (1772-1840), one of the first Englishmen to learn Chinese, who I have studied in my role as RAS Librarian and also in the course of my doctoral studies. Although I’m not qualified to talk about Thomas Manning’s role as a translator of Chinese, I did enjoy sharing what I have learned about Manning’s reasons for wanting to learn about China, and how this related to wider ideas about religion and society in late-eighteenth and early-nineteenth century Great Britain. I was delighted to participate in the conference, and enjoyed listening to a series of fascinating papers about many aspects of the history of translation, and the exchange of knowledge between China, Europe, and the wider world.

Hong Kong was a colony of Great Britain from the end of the First Opium War, in 1842, until 1997. During my short stay, I found it particularly interesting to learn more about the ways in which Hong Kong’s association with Great Britain combined with its Chinese heritage to shape unique cultural and intellectual traditions. In a twist of fate, my visit coincided with some of the recent protests, and – while I did not personally witness any protests – I felt fortunate to visit Hong Kong at such an important time, when its democratic spirit was in such clear evidence. My only regret was that I did not allow enough time to visit the Royal Asiatic Society’s Hong Kong branch (http://www.royalasiaticsociety.org.hk/).

Hong Kong’s built environment testifies everywhere to its long association with the UK. Thomas Manning generally shied away from the responsibilities of public office, and because he had little direct connection with the East India Company, his memory is not commemorated in street or place names. However, I did find several locations connected to other figures who have loomed large in my research. The first of these had to do with John Francis Davis (1795-1890), the second Governor of Hong Kong, who contributed the first paper (“Memoir concerning the Chinese”) that was published in the Transactions of the Royal Asiatic Society, published in 1827. Davis was on my mind partly because he figured in a talk I gave for the RAS a few days before I went to Hong Kong, which you can listen to online here. In his youth, Davis was an admirer of Chinese culture who translated Chinese novels into English, and his 1836 history of China, The Chinese, was one of the most influential works of its kind in nineteenth century Great Britain. Part of Hong Kong Island is named after him (Mount Davis), and while I didn’t have time to explore this part of Hong Kong, I did visit Davis Street in Kennedy Town – and enjoyed some dim sum in a local restaurant nearby. 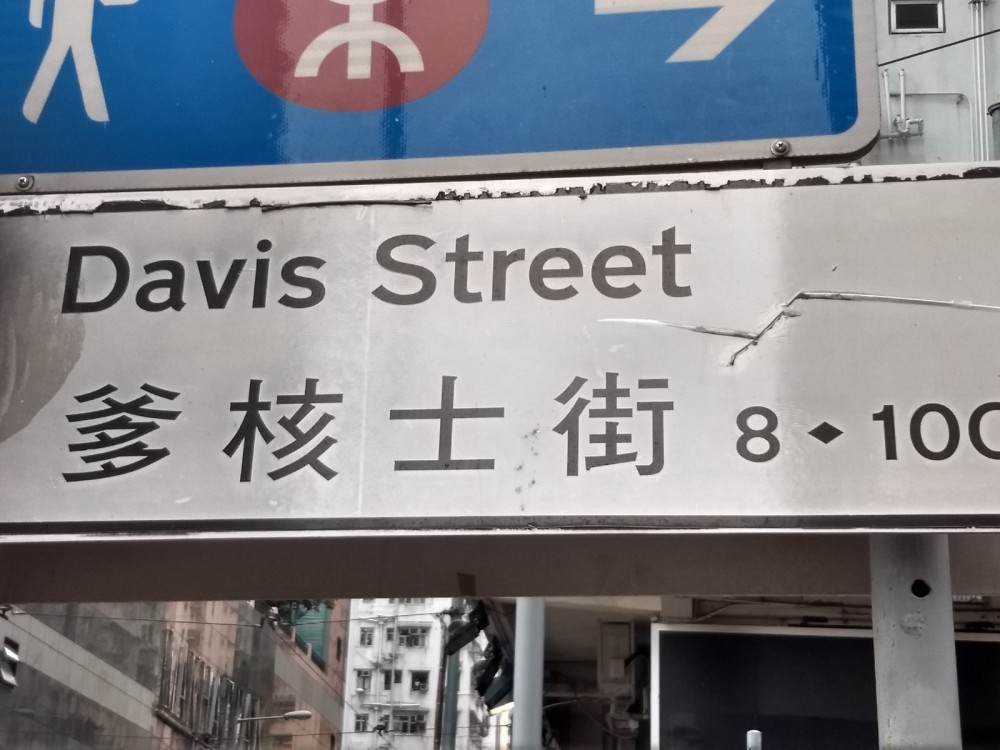 Later that same day, and quite by chance, I stumbled upon Staunton Street, which I didn’t even know existed. Staunton Street is in Soho, in Hong Kong Island – an area which shares a name with part of London I have spent much time in over the years. I developed a fascination with Hong Kong cinema while doing my first degree in East Asian history, and wanted to visit Soho to see the famous Central-Mid-Levels escalator which is featured in Wong Kar-Wai’s 1994 film Chungking Express. While visiting the escalators, I stumbled upon Staunton Street, which is named after Sir George Thomas Staunton (1781-1859), who was one of the first British people to learn Chinese, and an associate of Thomas Manning. Staunton started learning Chinese aged 12 while en route to China with the Macartney Embassy in 1792-3. The Embassy couldn’t find a single European speaker of Chinese to act as an interpreter, so had to recruit two Chinese Catholics who were living in Naples, and it was one of these men who started to teach him. Staunton’s career thereafter was chiefly associated with China, and he was a senior figure overseeing British trade and diplomatic relations with the Chinese authorities. This was a generation before the Opium War, and relations between the two imperial powers were cordial, for the most part, during Staunton’s tenure. Like his protégé Davis, Staunton had a largely positive view of Chinese culture, and among his translations was The Great Qing Legal Code, which he published in 1810. Staunton was a founding member and Vice-President of the Royal Asiatic Society, and he donated a number of important manuscripts, books, and artworks dating from his years in China. 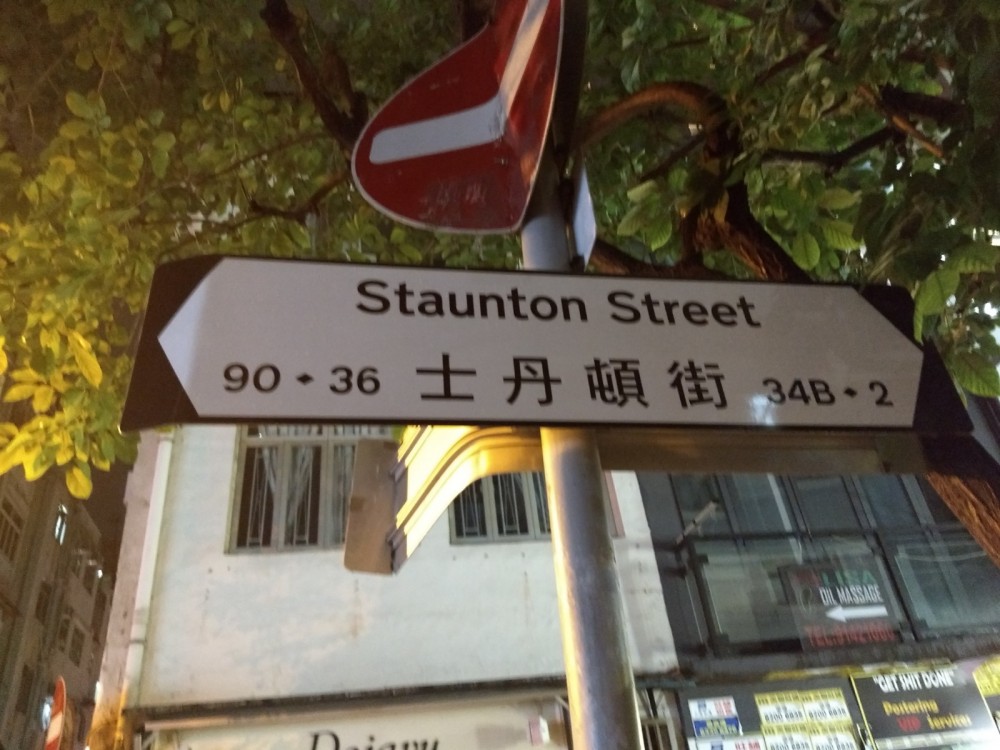 The last street I found by serendipity was Hart Avenue in Tsim Sha Tsui. It’s named after Sir Robert Hart (1835-1911), who was born in Portadown, County Armagh, Northern Ireland; not far from where my own mother was born. Hart lived in China for over fifty years, where he served as head of the Maritime Customs Service. Hart played an important role in China’s economic development and its interactions with foreign powers from the 1860s until his death in 1911. A little-known figure in Great Britain and Ireland for many years, Hart’s legacy has been better acknowledged in recent times, including in a documentary film, ​Sir Robert Hart: For China and the World (see here for more info). Sun Yat-Sen, the first president of Republican China, favourably described Hart as “the most trusted as he was the most efficient and influential of ‘Chinese’”. Today, Hart Avenue is a popular area in Kowloon where tourists as well as Hong Kongers meet and share a drink, and there are several pubs sure to have a familiar feel for British visitors. I felt glad, seeing Hart’s legacy memorialized in such a vibrant and energetic place. 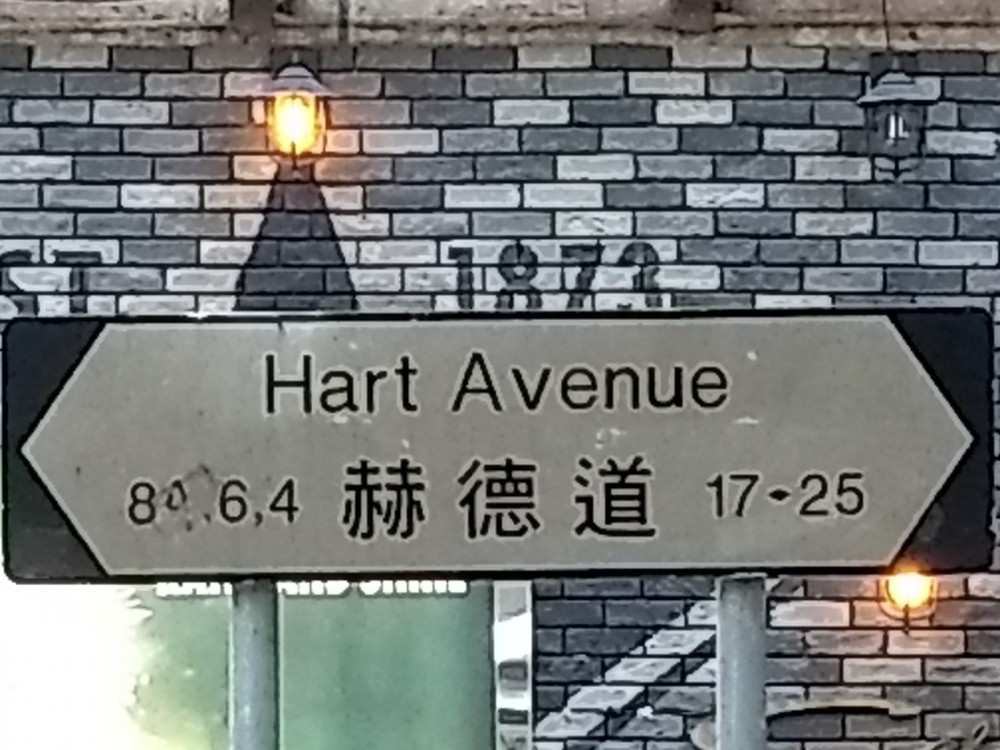 I am very grateful to Prof. Lawrence Wang-Chi Wong, and his colleagues in the Department of Translation at the Chinese University of Hong Kong, for their hospitality, and for the opportunity to visit Hong Kong and to participate in the Crossing Borders conference.