It has been a busy week in the Reading Room. We have had many researchers in looking at different things including Persian manuscripts. Malay manuscripts, Buginese manuscript, manuscripts and drawings from the Tod collection, journals, and the Society’s institutional archives. It is lovely to see the collections being well-used and readers finding some of the material they require for their research. It shows there is still a vibrant interest in our Collections.

But a busy Reading Room means less time for some of the core work of cataloguing. I am in the process of sorting some big collections of material but decided this week to concentrate on smaller ones that I could fit around the needs of our researchers. Firstly this week, I sorted and catalogued the records for Meetings of the Events and House Committee. These mainly consist of the signed minutes of the meetings with a small amount of allied correspondence and reports. The catalogue can be found on Archives Hub.

I then moved on to a set of small notebooks. Their author is unknown and how they came into the Society is also unknown. So they were catalogued as one of our Special Collections. In the notebooks the writer has copied letters from the Surat Factory Outward Letter Book No.1A of 1630 @1673 and Surat Factory Outward Letter Book No.2 of 1675 @1676 concerning trade and defense matters in the area. The copyist, though anonymous, has at times added comments such as, “This letter is eaten by white ants & I have to guess most of the words”. It is difficult to assess when the copies were made. It would seem from the publisher of one of the notebooks that they may have been made in the 1930s. Again the catalogue can be found on Archives Hub.

I am now working on the Papers of Major J. R. Cunningham which I hope will be catalogued by the end of today. In 1939, Major Cunningham sent to the Royal Asiatic Society a letter in which he describes a visit to the “Haram of Ali Raza the 7th. Imam, at Mashad in April 1939.” This initially caused me some confusion for it is the tomb of the 8th Imam that is at Mashhad, the Imam Reza shrine, and I have concluded this is the one that he describes. He sends his description for the benefit of the members of the Society as he believed that he and his wife were one of a few non-Muslims that had had the privilege of entering the Haram not in disguise. 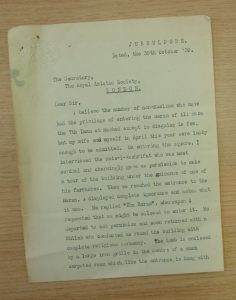 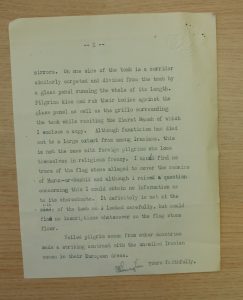 The first page of the letter describes how he gained permission to enter the Haram and begins his description of the place. This continues on the second side of his letter. His observations of the pilgrims visiting make for an interesting cultural statement of that period in history. He writes, “Although fanaticism has died out to a large extent among Iranians, this is not the case with foreign pilgrims who lose themselves in religious frenzy”, and also “Veiled pilgrim women from other countries made a striking contrast with the unveiled Iranian women in their European dress”.

With the letter, Cunningham sends a copy of the “Ziarat Nameh” which he says is recited by pilgrims at the tomb. 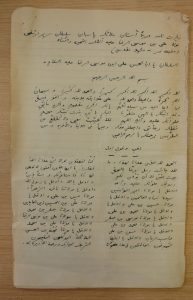 The letter is received by Colonel Hoysted, the then Secretary and Librarian of the Society. He consequently undergoes a process to find out what he should do with the material. He first sends a letter to a Mr Oldham, who suggests that Hoysted consults Dr Arberry as he thinks a description of the Haram might have already been published.

So Colonel Hoysted writes to Dr Arberry, who replies that he thinks that Mr Oldham is correct in thinking that the description had already been published and that the copy of the “Ziyārat-nāmah” was not a very accurate one and had already been published in Iran. He suggests, “that Major Cunningham be thanked for his kindness in transmitting the copy of the pamphlet which will be placed in the Society’s Library”.

The Council of the Society, not totally satisfied with this, then direct Colonel Hoysted to contact Professor Nicholson at Cambridge University. He agrees with Dr Arberry that it would not be wise to publish the material.

After this period of consultation, Hoysted writes to Major Cunningham to thank him for the material, on behalf of the Council. He first apologises for the delay in responding because, “The offices have been closed for the Christmas Holidays, and have been rather deranged by A.R.P. measures and the necessity of sending our treasures away to a place of safety”. This letter, sent in January 1940, again is a telling statement of the times in which it was written. Colonel Hoysted continues by thanking Cunningham for the account of his visit and the copy of the prayers, stating, “It will be placed, with great pleasure, in the Society’s Library, where it will be of value to students, who will be interested in the great changes you have reported upon”.

And it is still in the Society’s Library, perhaps now of less importance for its rarity and perhaps more for the social comment upon the times. But who knows? Once the material is catalogued and therefore known by researchers, it can be used in many ways. So, I better stop writing the blog and get on with the cataloguing…

But before I do, a quick reminder that next week from 8th- 11th July the Society is hosting “The Silk Roads: arts, history and exploration”, a 4 day course exploring all things to do with the Silk Raod. There is still chance to grab a last minute place. Full details can be found on our website.