Over the last 2 years, on several occasions, we have highlighted the acquisition of the Thomas Manning Archive and some the material of interest in the Collection. It was a fascinating experience to sort through all the items that were part of the purchase and be able to order them and catalogue them on to Archives Hub. But we did already have a few Thomas Manning items in the Archives before the acquisition in 2015. Among these were a series of Chinese letters which had come into the Collections in 1968 when Ruth Manning, one of Thomas Manning’s descendants, had asked if they could be translated. We still have her original letter and a copy of the reply from Miss Crawford, the then Secretary of the RAS. Ruth Manning’s letter states that there are three letters, each of which were translated, but when I came across the material there was only two letters with typed translations. Indeed there was a note with them to say that, in 1997, Godfrey Goodwin, the Honorary Librarian, had only found two, not three letters.

Where was the third? Had it been misplaced in subsequent moves, or damaged at some point, or given to some researcher or institution? In looking at all the donations that have ever come into the Society, there are many that are no longer with us for all sort of reasons. It seemed this letter was one of those.

However, last week I was sorting through one of the Miscellaneous Boxes (not Box M – still more to tell about that box) when I came across a Chinese document: 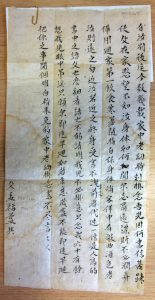 The paper and style looked sort of familiar. I began to wonder. So I went to the Thomas Manning Papers and found the other two letters. And it did seem the paper was the same as one of the other two: 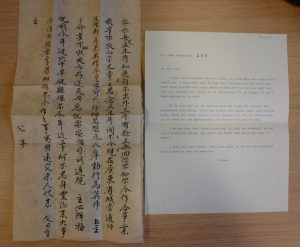 Was this just a coincidence? Just a document from a similar era? Or might there be some connection? I have no Chinese language skills but Ed, the Librarian, suggested that we contact Professor Lawrence Wong at the Chinese University in Hong Kong who is currently researching Thomas Manning.  Professor Wong quickly replied that it was indeed the missing letter. He was also kind enough to give some details about the contents of the letter. He wrote that it was a second letter sent by Zhao’s father (the first is pictured above). The father, now aged 60, misses the son. He urges the son to take good care of himself and advises him not to be too money-conscious. In particular he urges him to stay away from evil matters and asks him to come home soon. The letter is undated but bears the father’s name, Meng Fuyi.

I am very grateful for Professor Wong’s prompt reply and that it meant I could reunite the letter with the other ones and update the catalogue. I left work that day with a  smile on my face – maybe the find is not of much import in terms of world events but it was very satisfying to solve a 20 year old mystery.