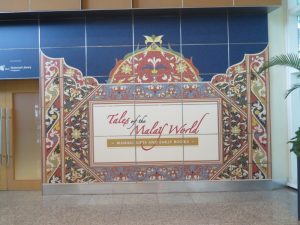 On the 18th August 2017, an exhibition of Malay manuscripts and printed books entitled ‘Tales from the Malay World’ opened at the National Library of Singapore. The exhibition explores traditional Malay literature through religious texts including Qur’ans, hikayat (narratives), syair (narrative poems), histories and court chronicles. The manuscripts and books are drawn from the collections held at  the National Library of Singapore, The British Library, the University of Leiden Library and the Royal Asiatic Society. This exhibition brings together for the first time Malay manuscripts from these four important collections, providing a unique opportunity to discover the narratives and contexts associated with book production in the Malay world. 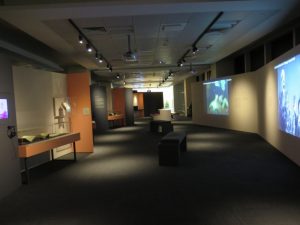 It is thought that only 10,000 Malay manuscripts exist today.  This paucity can in part be blamed on the tropical climate and the detrimental affect it has on paper but can also be attributed to the limited access to manuscripts as most were in the possession of local rulers and were used for recitation by story tellers at their courts. The majority date from the 18th and 19th centuries and many are copies commissioned by Europeans of earlier recensions in their attempt to learn the language and understand the culture and history of Malaya.  Most notable was Sir Stamford Raffles (1781-1826) who built up his collection during his service in Penang (1805-1810) and Melaka (1811), William Farquhar (1770-1839) who was the first Resident of Singapore under Raffles and Sir William Maxwell (1846-97) who held several important administrative positions in the Straits Settlement and the Federated Malay States.  Raffles bequeathed 80 Malay manuscripts to the Royal Asiatic Society in 1830, Farquhar presented 10 in 1827 and Maxwell bequeathed 105 in 1898.

One of the manuscripts on exhibition, known as ‘Raffles 18’, the Sulalat al- Salatin or Sejarat Malayu ( Malay Annals) is one of the most well-known texts of Malay literature and chronicles the history and genealogy of the rulers of the Melaka Sultanate (1400-1511). More than 30 manuscripts are known but this copy dated 1612 is believed to be one of the earliest recensions of the original text. The text gives a romanticised account of the origin, evolution and demise of the Melaka Sultanate. One of the episodes tells the story of a prince of Sumatra who arrived on the island of Temasek and established a city named Singapura.

Several of the manuscripts are beautifully illuminated including the Hikayat Iskandar Zulkarnain ( Farquhar 2) which is a Malay translation of a Persian text the recounts the exploits of Alexander the Great. There are numerous accounts detailing his adventures written in Europe and the Islamic world.  In the Islamic versions, he is tasked with conquering the world to propagate the faith of Ibrahim (Abraham).  The colophon states it was commissioned by William Farquhar who was Resident and Commandant of Malacca between 1816-17 and was copied by Yahya bin Abdul Walid. The presence of decoration is an indication that it was copied for a European patron as the manuscripts ( with the exception of Qur’ans) which were copied to be read aloud by story tellers were often plain.

The second part of the exhibition relates the development of printing in Singapore in the mid 19th century. The history of early Malay printing can be closely associated with the work of Protestant missionary organisations in the region which set up the earliest presses in Melaka and Singapore. Benjamin Peach Keasberry, (1811-1875), an early Protestant missionary in Singapore, established the Malay Mission Chapel with a successful press that was known for its innovative use of lithography that replicated the  hand-written calligraphy and decoration found in Malay manuscripts. The 1880s and 1890s are considered the peak of Singapore’s Malay/Muslim publishing industry with printing shops clustered around the Sultan’s Mosque in Kampong Gelam. By the 20th century, the number of printers in Singapore had begun to decline with the influx of books printed in Bombay, Cairo, Mecca and Istanbul.

The RAS lent three early printed books from the Maxwell Collection. The Jurangan Budiman ( Maxwell 94) published by Haji Muhammad bin Mustafa in Singapore in 1868, Syair Abdul Muluk ( Maxwell 86)  published in the same year and  Muhammad Hanafiah  (Maxwell 79), published in 1875. The roundel at the end of the book in the manuscript style informs us the publisher was  “Tuan al-Haji Muhammad Saleh, a Javanese, and the place of printing was in the Mosque of Sultan Ali Iskandar Syah Lane” (“Tuan al-Haji Muhammad Saleh, orang Jawa, dan tempat capnya di Lorong Masjid Sultan Ali Iskandar Syah”). The date is Sunday 14 Rajab 1292 / 15 August 1875.  Muhammad Hanafiah, first composed in Persian in the 14th century and later translated into Malay, recounts the heroic exploits in battle of Muhammad ibn al-Hanafiyyah who was involved in the uprising against the Caliph Yazid I ( 647-683) in the aftermath of the Battle of Kerbala in 680.  Hikayat Muhammad Hanafiah was one of the hikayats mentioned in the Sulalat al- Salatin or Sejarat Malayu read by Malay warriors to raise their fighting spirit during the siege of Malaka by the Portuguese in 1511.

The exhibition was opened by his Excellency, the Minister of Communications and Information, Dr.Yaacob Ibrahim, and Dr. Annabel Gallop of the British Library gave a lecture entitled ‘Art and Artists in Malay Manuscript Books.’  The exhibition was curated by Huism Tan in collaboration with the exhibition manager Alvin Koh, and will run until 25th February 2018.