Today, 27th April, marks the death of General John Briggs in 1875, aged 89. Briggs entered the Madras Army in 1801 and served in the Second Mahratta War. In 1810 he accompanied Sir John Malcolm on his mission to Persia. He was one of Mountstuart Elphinstone’s assistants in the Dekhan, subsequently served in Khandesh, and succeeded Captain Grant Duff as resident at Sattára. In 1831 he was appointed to the Board of Administration of Mysore but resigned in 1832 and took up the position of Resident at Hagpur. He returned from India in 1835 and  took a prominent part in the court of proprietors of the East India Company in the discussion of Indian affairs. He was an opponent of Lord Dalhousie’s annexation policy and also an active member of the Anti-Corn-law League.

Briggs was more than just a political man. He translated Ferishta’s Tarikh-i-Ferishta  and Siyar-ul-Murákhirin. He contributed several articles to the Journal of the RAS and he was an active member of the Society, including becoming a Vice-President in 1863. We have original editions of Briggs’ “History of the Rise of the Mahomedan Power in India till the Year A.D. 1612, translated from the Original Persian of Mahomed Kasim Ferishta” in its four volumes presented to the Society by Briggs in April 1829: 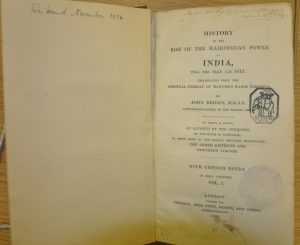 He was also a generous donor of manuscripts, archives and paintings. At some point, Briggs donated 3  drawings that he had made of monuments at Bijapur and and a fourth drawing by an Indian artist. Briggs drawings are very detailed and display that he also had some artistic talent. Here are pictures of them:

The painting by the Indian artist is a copy of a miniature dating from 1665-1670 which can be found in the Islamic Department of the Museum of Art, New York, having been bought in auction in Paris in 1982. Yusf Adil Khan of the Adil Shahi Dynasty is shown surrounded by seven seated figures, a court official and an attendant.

The painting is ascribed with names in Persian characters and numbered:

Among his donation of manuscripts is a version of  the Shahnamah by Firdausi presented to the Society by Briggs in 1853. This version has headings and grids in red. with some inferior illumination at heads of sections.

This gives a taste of some of the items in our Collections donated by Briggs. If you are interested in finding out more, please do not hesitate to contact us.