The RAS held events on consecutive evenings last week, which demonstrated some of the different ways scholars and a wider public are engaging with Asian histories and cultures. On Thursday 27th April, we hosted a lecture from Dr Tara Douglas (Adivasi Arts Trust) titled “Tales of the Tribes: Connecting to Cultures through Animation”. Dr Douglas highlighted the work of local artists, hailing from tribal communities in different parts of India, who are representing indigenous culture through animation, an art form traditionally associated with foreign powers. Dr Douglas showed how the medium has the potential to not only communicate traditional culture to new generations of audiences; it also allows people to participate in the process of interpretation and communication. After the inspirational lecture, attendees were grateful for the opportunity to watch one of the animated videos, and also for a further opportunity to discuss the issues raised by through a Q&A and over refreshments afterwards. One example of the animations that have been produced is Man Tiger Spirit (the story from Nagaland) which can be seen on YouTube here

On Friday 28th April we welcomed Bruno de Nicola, Research Fellow in Middle Eastern Studies at University of St Andrews, for the launch of his book ” Women in Mongol Iran: The Khãtûns, 1206-1335″.  The book investigates the development of women’s status in the Mongol Empire from its original homeland in Mongolia up to the end of the Ilkhanate of Iran in 1335 and in his talk Dr de Nicola revealed the thematic approach of the chapters and how they show a progression of this development and contextualise the evolution of the role of women in medieval Mongol society. He emphasied the roles that women were able to play within a patriarchal context and how the status of women varied in the different periods of the Mongol Empire as it expanded westwards into the Islamic world. The talk was followed by some interesting questions which further clarified the topics in, and the focus, of Dr de Nicola’s book.

These two lectures concluded our April events. But we have plenty more to look forward to in May, beginning on Thursday 4th May when we will join with the Armenian Institute to welcome Dr Claude Mutafian to lecture on “The Magic of Writing: A Survey from Stone inscriptions, Illuminated Manuscripts to Printing”. The first language spoken by the ancestors of the Armenian people was Urartean, written with cuneiform characters. Many stone inscriptions, in this or in the neighbouring languages, have survived. Thousands of manuscripts were copied during the following centuries, essentially on parchment, although the paper was known as early as the 10th century. They are precious not only for the text, the calligraphy, the decoration and the miniatures, but also for the important information given by the copyists in their colophons. Later on, printing was quickly adopted, with the first book being published as early as 1512. Dr Mutafian will examine this  “passion for writing” which may be partially explained by the course of Armenian history. Please note that this lecture starts at the later time of 7pm. 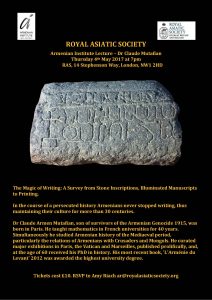 On Monday 8th May we are hosting an event for the launch of Professor Nobuaki Kondo’s  book, “Islamic Law and Society in Iran: A Social History of Qajar Tehran”. Professor Kondo is a professor at Research Institute for Languages and Cultures of Asia and Africa, Tokyo University of Foreign Studies. His research interests cover early modern history of Iran and the Persianate societies. This event begins at 6.30pm  and for both occasions we hope that many of you will be able to join us. 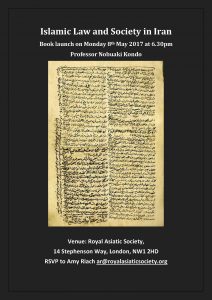