On Tuesday 18th April, we were pleased to host Dr Martin Bayly’s lecture on “Taming the Imperial Imagination: The Genesis of Colonial Knowledge on Afghanistan, 1808-1878”. In this he spoke concerning the  “knowledge entrepreneurs” – the early explorers of the areas whose findings and prejudices fed into the “story” of the area, and helped to feed not only the colonial imagination but also the policy of negotiation and subjection of the rulers and peoples inhabiting the region.

Dr  Bayly mentioned the literary image portrayed by Rudyard Kipling, but also explorers and soldiers such as Montstuart Elphinstone, Alexander Burnes, Charles Masson and Henry Rawlinson. As with many of the lectures held here, this lecture acted as a prompt to discover allied material within the collections. We have an extensive Rawlinson archive but I also found that we have several books written within about Afghanistan dating to the time period covered in Dr Bayly’s lecture.

We have a small  1846 volume entitled “Sale’s Brigade in Afghanistan with an Account of the Seizure and Defence of Jellalabad” by Reverend G.R. Gleig, Principal Chaplain to the Forces. George Robert Gleig (1796 – 1888) was a Scottish soldier, military writer, and priest who gave up his scholarship at Balliol College, Oxford, to join Wellington’s Army to fight against Napoleon. He subsequently fought in the United States before returning to complete his degree at Magdalen College. Gleig became a friend of Wellington’s and wrote his biography, The Life of the Duke of Wellington.  He was an author of both fiction and non-fiction including many military works, one of which is this volume, which he wrote whilst chaplain to the Chelsea Pensioners. In his preface or “Advertisement” as Gleig calls it, he states “The substance of the following story is gathered chiefly from the manuscript journals of officers engaged in the campaign. I have consulted, likewise, the Orderly Books of the 13th, which verify every statement advanced; and the conversation of various individuals, particularly of Captain Wood, Brigadier-Major at Chatham has been of infinite use to me.” 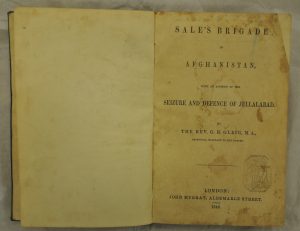 Thus, it seems, a well-researched volume about this Afghan War. His opening sentence of the first chapter exposes a degree of ignorance, not only of Gleig’s, but of the British in Afghanistan. This was also highlighted in Dr Bayly’s lecture. Gleig writes: “It is impossible to fix, with any degree of accuracy, the present limits of the kingdom of Cabul. When visited by Mr. Elphinstone in 1809, it was said to extend from the west of Heraut in longitude 62º, to the eastern portion of Cashmere in longitude 77ºE; and from the mouth of the Indus in latitude 24º to the Oxus in latitude 37º N”. He then explains that it is rather more complicated than first thought both in terms of geography and allegiance to rulers. He continues to describe the people who inhabit the area, their features and occupations, before attempting a second chapter on Afghan history. A list of the chapter titles is quite revealing in terms of content of the book and description of Sale’s Brigade in Afghanistan:

In contrast to this slim volume of 182 pages, measuring approximately 17 cm x 12 cm, is Charles Masson’s four volume work, “Narrative of Various Journeys in Balochistan, Afghanistan, The Panjab , & Kalt, during a Residence in those Countries”. This 1844 work totals nearly 2000 pages and whilst not all about Afghanistan, also provides information concerning how the British viewed the region. Here he describes the day of his arrival into Kabul:

“The day of my arrival was distinguished by the presence in the bazar of cherries, the first-fruits of the year; a day or two after apricots were seen, and in four or five days they were succeeded by mulberries. Cherries, I observed, were of three varieties; and to the Emperor Baber is ascribed the merit of their introduction into Kabal, and to which he lays claim in his memoirs.”

Masson continues to praise the variety of fruit in the area and also the abundance of ice, “so cheap as to be within the reach of the poorest citizen… During the winter large blocks of ice are deposited in deep pits, lined with chaff; matting for a depth  of some feet, is placed over them, and the whole is covered with earth.” Masson describes the excursions he undertakes whilst at Kabul including going to see the tomb of the Emperor Baber which he claims, of the shrines of the city, best repays a visit. He writes, “It is attractive from the recollections we carry with us, and the reveries to which they give rise. It is equally so from the romantic situation of the spot, its picturesque aspect, and from the extensive and beautiful view if commands.” 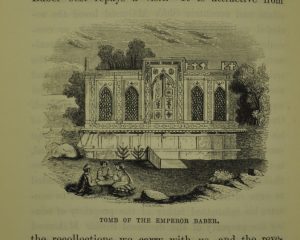 Masson’s four volumes have a small number of engravings including this View of the caves at Bamian. 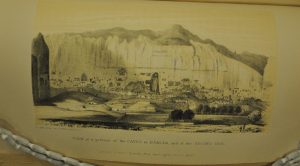 He also includes a map to show the extent of his travels: 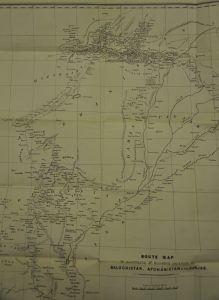 Other books from this period within the collections include:

So, if this is an area of history that interests you, please come and make us of our collections for your research.