On Thursday 9th November, Dr Andrew Arsan, from the University of Cambridge, gave the next lecture in our RAS Lecture Series. His lecture was entitled “Beyond Formal and Informal Imperialism: Beirut, Hong Kong and the growth of European power, c.1830-1870”.  Dr Arsan compared the growth of both Beirut and Hong Kong in the time period and the parts that they played as trading posts for global expansion. Though an expert in Middle Eastern history, a recent period spent in Hong Kong sparked this current line of enquiry, comparing and contrasting the importance of Beirut and Hong Kong in the development of their regions, and how these places are still involved in global trade.

Again, this talk made me consider what materials we might have that are relevant to the theme of the lecture. Beirut proved a little tricky – we hold printed material about Beirut and Lebanon, 43 titles appear in our online catalogue with the search term Beirut. But in looking at the printed “Catalogue of Paintings, Drawings, Engravings & Busts” by Raymond Head, I also discovered that we have a lithograph by the artist T. Picken, after a sketch by the Rev. F.S. Newbold, 4 July 1838, so dating to the time frame of Dr Arsan’s talk. This picture shows the harbour at Beirut before the bombardment in 1840 and its later development. 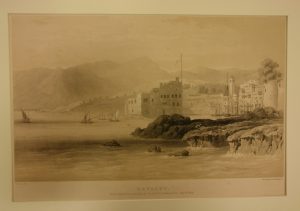 I have not been able to find much information about either Thomas Picken or the Rev. Newbold. It seems that Picken was a British artist who both painted and worked as an engraver until his death in 1870. The Reverend Newbold, in 1829, left his post as a vicar in Lincolnshire to become headmaster of the Macclesfield Free Grammar School. I wondered whether there might be any connection between him and Captain Thomas John Newbold, the East India soldier and orientalist (and for whom we have some Personal Papers in our Collections). Captain Newbold was born in Macclesfield in 1809 to a Francis Newbold, but a surgeon not a reverend. I have yet to find any connection between the two men; Thomas Newbold would have left for India before the Reverend Newbold arrived in Macclesfield. I also have found no evidence as to why F.S. Newbold went to Beirut. Please tell me if you know more…

When it came to looking for images of Hong Kong, I had an easier time. Within our Photograph Collections is an album containing 46 albumen prints, most of them views of Hong Kong and Macao, dating from 1866-1874 (so again within the time frame of Dr Arsan’s lecture). These are attributed to William Pryor Floyd whose “Floyd’s Victoria Studio” was in Queen’s Road, Hong Kong. According to the website, Historical Photographs of China:

“William Pryor Floyd (1834 – c.1900) was an innkeeper’s son, born in Cornwall, England.  In 1863-64, he worked as an assistant in the photography studio of R. Shannon & Co in Shanghai.  Floyd moved to Macau to establish his own studio along the Praya Grande.  In 1866-67 he joined the Hong Kong studio of Silveira & Co, soon becoming its owner.  Floyd & Co’s ‘Victoria Photographic Gallery’ was at 62 Queen’s Road Central, Hong Kong.  “An important and highly talented British photographer whose Hong Kong studio was, for a time, one of the most successful commercial operations of its kind in the Far East” (Terry Bennett, History of Photography in China, Western Photographers 1861-1879). By 1875 Floyd had sold his portrait and topographical photography business and moved to the Philippines.”

So here are some images to show how Hong Kong would have appeared to people in the era of Dr Arsan’s lecture:

Our next lecture will take place on Thursday 16th November, at 6.30 pm, when Professor David Park of the Courtauld Institute of Art will lecture on, “Preserving the Buddhist Wall Paintings of Bhutan”. We hope that some of you will be able to attend.

We would also like to remind you of our upcoming “RAS Collections Open Evening”,  on Tuesday 21st November, at 6.30 pm, when there is a chance to hear short talks about our Collections ,alongside viewing some of our many interesting and unique items. It is a free event and an excellent chance to see some of the treasures about which I have written in the blog.