On Thursday 16th November we welcomed Professor David Park to give a lecture on “Preserving the Buddhist Wall Paintings of Bhutan”. Professor Park described some of the many different types of wall paintings dating from the 13th century (unfortunately no longer preserved) until the present day and including those directly on wall, on wooden panels or on canvas attached to look like wall paintings. Professor Park and his colleagues at the Courtauld Institute have been involved in the survey of these paintings and with some conservation projects. 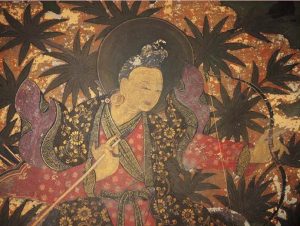 Professor Park shared with us some exquisite pictures of the artwork in need of conservation, such as the detail pictured above. He also spoke about some of the current dilemmas and past techniques used in conservation. We are grateful to have had the opportunity to learn about this art which few people living outside Bhutan have had the chance to see. 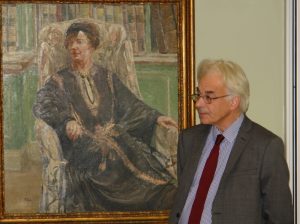 The photograph, above, show Professor Park waiting during Dr Alison Ohta’s introduction for his lecture. Behind him sits Freya Stark in a c.1934 portrait by Lord Paul Ayshford Methuen. This is one of the many artworks that will be on display in our forthcoming RAS Collections Open Evening. This will be held this coming Tuesday, 21st November at 6.30pm. There will be 10 minute talks by Professor Anthony Stockwell, Vice-President of the RAS,  Peter Collin, Council Member of the RAS, Dr Roger Parsons, long-serving volunteer at the RAS, and Rebecca Snow, Camberwell College of Arts. Each of the three gentlemen will speak on some aspect of the collections in which they have undertaken research, and Rebecca Snow will share about her conservation work with our Collections.

Alongside the speeches there will be exhibitions of the Collections in both the Reading Room and the Council Room. This will give you an opportunity to gaze more thoroughly at some of the artwork that hangs on the wall, such as the James Wales’ portrait of Madhu Rao Narayan, the Maratha Peshwa, with Nana Fadnavis and attendants, and the Design for Snakes and Ladders. presented by Henry Dundas Robertson, which will be included in the Royal Historical Society’s forthcoming 150th anniversary presidential address by Professor Margot Finn on 24 November 2017.

Alongside the artwork on the walls we will have displays of material that are usually safely stored away. This will feature work that is currently being undertaken by some of our volunteers and placement students including early 20th century Chinese glass slides, which have recently been conserved; the Papers of Horace Geoffrey Quaritch Wales, archaeologist in Thailand and Malaysia; and mid-nineteenth century photographs of the Antiquities of Java.

We will also have out on display, many of the treasures that have featured in the blogs in recent months – so you will get to see in reality some of the items from Miscellaneous Box M, the Pryor Floyd Photo Album of Hong Kong and Macao, the beautiful volumes of plants and snakes of Coromandel, some of the material connected with Brian Houghton Hodgson and the 1783 Description of Bhutan by Samuel Davis. Here are some pictures to tempt you…

Also, on display, will be the works which have inspired our evening’s speakers and some of our other treasures too. We do hope that you will be able to join us for the evening.

The Collections Open Evening is not the only event to be held at the RAS in the forthcoming week. on Thursday 23rd November at 6.30pm, Dr Elaine Wright from the Chester beatty Library, Dublin, will lecture on “Lapis and Gold: Exploring Chester Beatty’s Ruzbihan Qur’an”. We also hope that many will be able to join us to hear about this exquisite item. 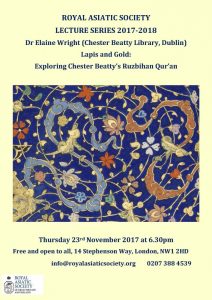