We are pleased to announce that the complete catalogue for the Papers of Brian Houghton Hodgson is now available on Archives Hub.  The Papers previously had detailed listing of some of them, the list being available to researchers within our Reading Room. This was adapted and incorporated into the format of the Archives Hub catalogue and then the catalogue extended to include the other material that have previously been sorted but not listed. The material was also cleaned and packaged in appropriate archival folders.

Brian Houghton Hodgson is considered as the “father” of Himalayan studies and our archives reflect some of his many interests and both his, and his wives,  passion for recording his life. Thus the first series in the catalogue consists of all the entries in an Autograph Book compiled by Susan Hodgson. In it are 205 items, mainly letters, certificates and newspaper cuttings, which give insight into the people and institutions with whom Hodgson was in contact, and the many gifts that he gave of specimens, manuscripts and pictures. 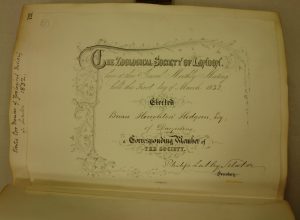 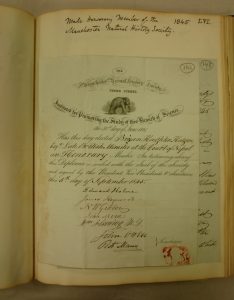 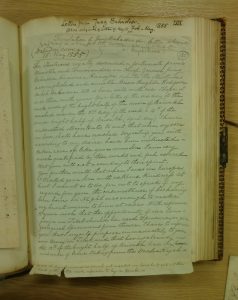 The three illustrations above give an example of the material that can be found in the Autograph Book. But besides the correspondence within the pages of this book there are also many other letters including 38 letters from Joseph Dalton Hooker, the botanist, and 35 letters from the explorer, Archibald Campbell. Both of these men stayed with Hodgson whilst exploring the Himalayan region.

There are also more than 50 other letters including a series from 1873 in which Hodgson was one of several people connected with the Society for the Encouragement of Arts, Manufactures and Commerce, who were campaigning for the government to look at transhimalyan trade possibilities. These letters have featured in an earlier blog and include this letter from Colonel Hardy to  acknowledge Hodgson’s letters and to assure him that the clerical errors had already been corrected in the printed proofs and that the additions Hodgson suggests will be considered by the Executive Committee, dated 7 April 1873. 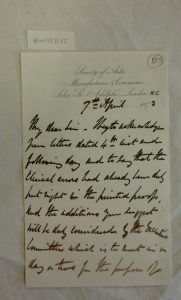 Besides correspondence there is a volume of manuscripts and printed material. Hodgson was a prolific annotator so much of his printed material also bears his copious notes.

The material, within the catalogue, has been divided into different subject matter – thus there are series for material related to Language and Ethnography, Buddhism, Education in India, Political Subjects,  and Zoology and Botany. This includes one botanical specimen of  “Darharde bark of root of large tree growing at Kansing used as a dye”. 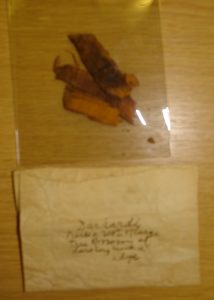 Hodgson was very keen on lists. When moving from one location to another, or sending material to an institution, he would make sure that there was a list of the items. And in true archival style, there is a story to tell about one of the lists. I finished the writing and checking of the catalogue on a Thursday, and had sent it to Archives Hub for them to install on their system. On the Friday afternoon, I was looking through some miscellaneous boxes of paintings on a hunt for some Tibetan paintings, part of the Quaritch Wales bequest. I didn’t find these paintings in the miscellaneous boxes, but I did find “List of contents of five boxes left at Brianstone, January 1858”. This is an unique list in this collection as it is written on Indian paper in the vernacular language. I had to quickly amend the catalogue and re-submit to Archives Hub, with a note to explain the addition. 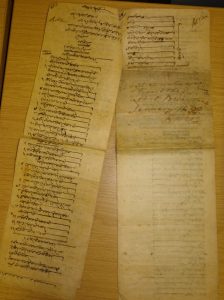 Newspaper cuttings form another large part of the Hodgson Papers. Some are within the Autograph Book and coreespondence, but there are also 119 loose newspaper cuttings which have now been ordered and catalogued.

The Hodgson set of Personal Papers has taken several months to sort and catalogue. But it is not the only new catalogue on Archives Hub this year. A small collection of correspondence to Bernard Quaritch, the antiquarian bookseller, has been catalogued and is also on Archives Hub. These include letters from Max  Müller, Horace Hayman Wilson,  Edwin Arnold, and Edward Fitzgerald. Quaritch became lifelong friends with Edward Fitzgerald and published his translation of The Rubáiyát of Omar Khayyám in 1859. More details of  Bernard Quaritch and this catalogue can be found on this webpage.

There is still much work to be done to get all the archives organised but there are now catalogues for 17 sets of Personal Papers available on Archives Hub. Work is now underway to get the first set of Institutional records on to the catalogue – those for the Triennial Gold Medal which was awarded approximately every 3 years from 1897 to 1990.

There have been no lectures this week at the RAS, but next week, on Tuesday 20th February at 6.30 pm,  Amy Matthewson (SOAS) will lecture on “Mr Punch and Chinamania: Blue Willow China and Consumer Consumption in ‘Punch’ Magazine, 1874-1880”. We are particularly pleased to welcome Amy as, whilst working on her PhD, she also volunteered with the RAS Collections and sorted and catalogued our Chinese glass slides. We hope that you will be able to join us for her lecture.