We are very pleased that, courtesy of the Horniman Museum,  we have received a statue on loan to exhibit in our Reading Room until 6 December. The object in question is a seated altar figure representing the Daoist god Zhenwu, the Perfected Warrior, also known as Xuanwu, or Dark Warrior, who is the guardian of the north and particularly revered by martial artists. The loan is part of the Arts Council England-funded ‘Object in Focus’ programme. 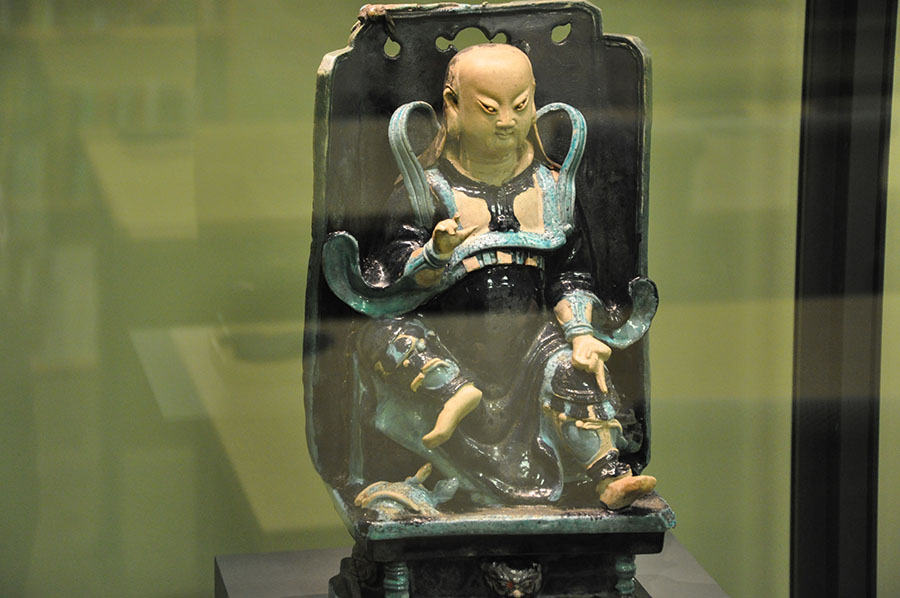 Zhenwu is depicted seated with an integral backdrop and plinth; under his raised left foot is a tortoise encircled by a snake, the symbol of the north. The figure is made from pale grey stoneware decorated with turquoise and cobalt blue glaze. It was probably made in Jingdezhen, the ‘porcelain capital’ of China, and is believed to date from the 18th century.

The RAS had a significant museum collection in the nineteenth century, consisting mainly of objects donated by members of the Society. However, during the latter part of the century, a lack of space meant that most of the museum collection was loaned or transferred to other institutions, including the Crystal Palace and the India Museum (which was later amalgamated into the Victoria and Albert Museum). In 1924 ownership of most of the Society’s museum was transferred outright to the V&A, including the jade cup of Jahangir owned by the Society, for which a £100 payment was received. The remaining items not wanted by the V&A were sold by the Society at auction, some of which (though not this statue) ended up being bought by the Horniman Museum!

The Society’s museum contained objects from across Asia, including some from China, notably a jade sceptre given to Sir George Leonard Staunton by the Qianlong Emperor during the Macartney Embassy of 1793. One of the reasons it is so pleasing to be able to take this statue on loan is that it serves as a reminder of the Society’s largely forgotten early history of museum collecting. Today, while the Society regularly loans manuscripts and artworks from its collection to other institutions, we hardly ever take items on loan; so this is a new way for us to try and fulfill our mission to promote study and wider interest in Asian cultures and histories.

In conjunction with the loan, we are delighted to host a lecture by Dr Rose Kerr, Former Keeper of the East Asian Department, Victoria and Albert Museum, on “Zhenwu, the Dark Warrior: Daoist beliefs and imagery in China”. The lecture will take place at 6.30pm on Tuesday 27 September in our Lecture Theatre, and marks the beginning of our lecture series for 2016-2017. We hope that you will join us for this event, and of course take the opportunity to see the Zhenwu statue in our Reading Room while you are here.

Everyone is welcome to visit us and see the statue of Zhenwu, as well as our other treasures, during normal Library opening hours, which are 10am-5pm Tuesday and Friday, and 2-5pm on Thursday. If you would like to see the statue outside these hours, please contact us before you visit. The statue is here on loan until Tuesday 6 December.

We are very grateful to the Horniman Museum for making the Zhenwu statue available to us, and we hope that our Fellows and other visitors will enjoy coming to see Zhenwu in the coming months. 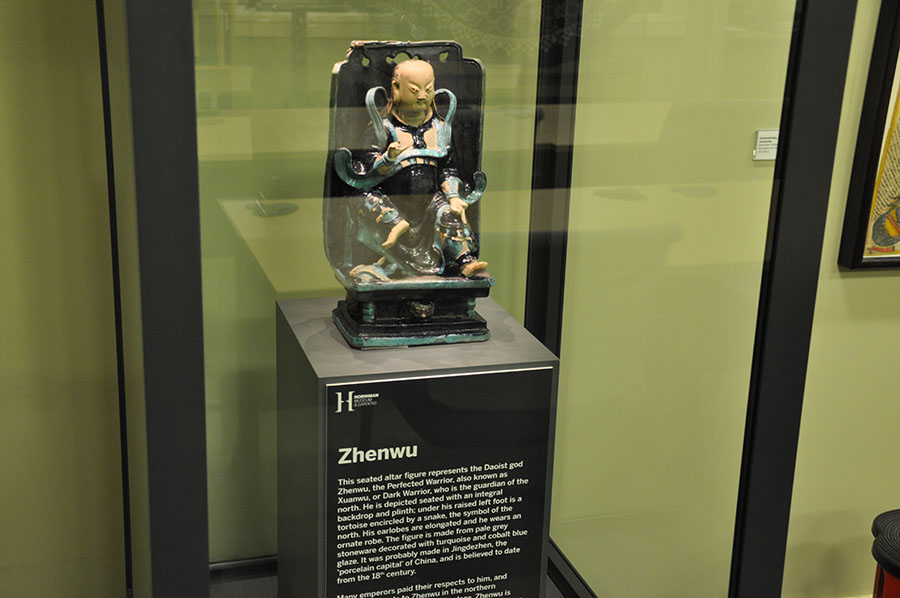