Wednesday 23rd November found the RAS Reading Room in a flurry of creativity or maybe that should be in a study of creativity. We held our second creative writing event led by Emma Filtness, Lecturer in Creative Writing at Brunel University. Last year, as part of Explore Your Archives week, Emma focused on the theme of “Tea and Testimony”, two things which many might consider as essentials – a good cup of tea and a chat. This year, the workshop encouraged people to engage with something even more essential – water, so necessary to all of life. In times past, and still for many today, finding and carrying water is a time-consuming and effortful business. Water has provided us with means to travel from one place to another, to find food and engage in business. Water is also considered by many to have purifying properties. All of these different aspects of water were reflected in the Collections brought out on display.

So the display included paintings and photographs of water “carriers”:

Water carrier or bhisti – c.1880 photograph from India. This is a full-length studio portrait of a water carrier, carrying his inflated skin of water over his shoulder (Photo.33/1)

Women returning from the river with water jars on their backs (Head Cat.047.006). This is an Ethiopian oil painting probably dating from the 1960s. It is one of a set of 8 paintings of ethnographic scenes donated by Dr Richard Pankhurst (suffragette Sylvia Pankhurst’s son) in 1983. Sylvia Pankhurst had been an active supporter of Ethiopian culture and independence after the Italian invasion in 1935, and Richard grew up knowing many Ethiopian refugees. Sylvia was a friend of Haile Selassie. In 1956, she and Richard moved to Ethiopia. He began working at the University College of Addis Ababa and in 1962 was the founding director of the Institute of Ethiopian Studies. Pankhurst left the Institute in 1976 after the death of Haile Selassie and returned to England, where he became a research fellow at SOAS and LSE, before working as librarian at the Royal Asiatic Society. He returned to Ethiopia in 1986.

There were photographs of water and transport:

Meal hour, Tanjong Pagar Docks, Singapore. This photograph, dating to the 1890s, is the first of 52 in an album of albumen prints exploring the Tanjong Pagar Docks. The album is decorated with the Dock Company motif of a lion. The Tanjong Pagar Dock Company was registered in 1864 and by 1866 they had constructed 1500 feet of wharves. But capital investments did not match returns and eventually the Dock was expropriated by the Colonial Office in 1905. In 1913 the company was transformed into the Singapore Harbour Board, a precursor of the present Port of Singapore established in 1964.(Photo.01/1)

Lake Colombo, Sri Lanka. This photograph, dating from 1870-1880 shows a view looking along the shore, with a local ferry moored in the foreground at the water’s edge. This lake, now known as Beira Lake is in the centre of Colombo and at the time this photograph was taken would have been over 165 hectares. Nowadays it covers only 65 hectares. The lake was constructed before the city’s urbanisation and had a network of canals running into it and an outlet to the Indian Ocean. (Photo .04.22)

And there was an Islamic “magic” bowl:

An Islamic ‘magic’ bowl is a bowl in which water was believed to take on magical/curative properties. In order to increase the magical power of the blessings and the mystical properties of the prayer water, there are Islamic spells engraved in sacred Arabic lettering on the surface of the bowl. These spells serve to induce the divine characteristics of the Islamicwali saints, which bring protection against black magic and evil jinns, and bestow blessings of improved fate as well as an increase in fortune. In this way, when water is poured in to the bowl, whether the water has already been blessed or not, it will automatically turn into holy water due to the power of the Islamic spells. In order to do this, the bowl should be filled with distilled water and left standing for one night, preferably outside one’s residence, to absorb the bright light from the moon and the stars. The next morning one will have a bowl of holy water which is ready for immediate use; i.e. to use it before performing the morning prayer.

After sharing examples of authors using water in their writing, the participants spent time examining the material on display to hopefully provide inspiration. 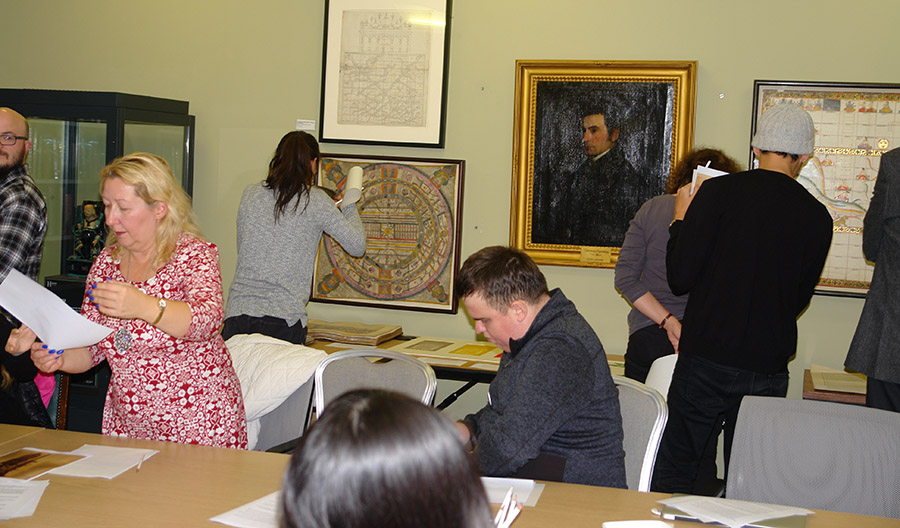 They then became to think and make notes towards their own piece of creative writing: 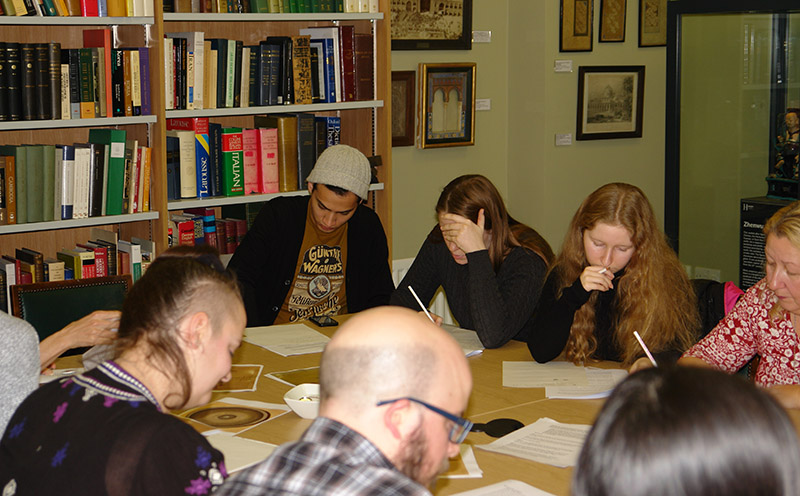 People chose to write in both poetic and prose forms. Towards the end of the session, Emma encouraged participants to share either their ideas towards the piece they were working on or a section of their draft. It was so interesting to find that people had found many different ways to engage with the items on display and many were keen to develop their pieces of writing after the workshop. A huge thanks must go to Emma for again giving her time freely to enable us to welcome so many people into the Reading Room, the majority of whom had never visited the RAS before.