William Jones, one of the greatest linguistic prodigies of the eighteenth-century, thoroughly fluent in English, Welsh, Greek, Latin, Persian, Arabic, Hebrew, and Sanskrit, was through the influence of his patron, the Earl Spencer (Jones had been tutor to his son), appointed in 1783 to the lucrative office of a judge on the Supreme Court of Judicature at the East India Company’s settlement, Fort William, in Kolkata.

‘When I was at sea last August, on my voyage to this country, which I had long and ardently desired to visit, I found one evening, on inspecting the observations of the day, that India lay before us, and Persia on our left, whilst a breeze from Arabia blew nearly on our stern. A situation so pleasing int itself, and to me so new, could not fail to awaken a train of reflections in a mind, which had early been accustomed to contemplate with delight the eventful histories and agreeable fictions of this eastern world. It gave me inexpressible pleasure to find myself in the midst of so noble an amphitheatre, almost encircled by the vast regions of Asia, which has ever been esteemed the nurse of sciences, the inventress of delightful and useful arts, the scene of glorious actions, fertile in the productions of human genius, abounding in natural wonders, and infinitely diversified in the forms of religion and government, in the laws, manners, customs, and languages, as well as in the features and complexions of men. I could not help remarking, how important and extensive a field was yet unexplored, and how many solid advantages unimproved; and when I considered, with pain, that, in this fluctuating, imperfect, and limited condition of life, such inquiries and improvements could only be made by the united efforts of many, who are not easily brought, without some pressing inducement or strong impulse, to converge in a common point, I consoled myself with a hope, founded on opinions which it might have the appearance of flattery to mention, that, if an any country or community, such a union could be effected, then it was among my countrymen of Bengal, with some of whom I already had, and with most was desirous of having, the pleasure of being intimately acquainted.’

Jones’s enthusiasm for finding out about other people’s languages, literature, religion, arts and society was driven in part by the Enlightenment’s thirst for pure knowledge and the expectation that discovering such would lead, rationally, to improvement in the lot of human existence. It was allied to different Romantic ideals (strong in Jones as a Welshman) that sought to explore the emotions and to bring together universal human experiences: all would benefit about knowing each other. Jones’s Asiatic Society in Kolkata was to make a distinctive contribution to the furtherance of knowledge and understanding about Asia, and much was brought to a wider public for information and criticism through its meetings and publications. Jones himself was a prolific researcher and his collected works, published posthumously in eight quarto volumes, brought together much of his own learning. His Asiatic Society became the model for other similar organisations in India and abroad: the Royal Asiatic Society of Great Britain and Ireland founded in London in 1823 was one such.

As the RAS approaches its 200th Anniversary, we are delighted to have been given by Dr Michael Loewe a set of the first edition of Jones’s Collected Works, together with the supplementary volume of his Life, written by Lord Teignmouth. Although the Society has a later editions of Jones’s work, the Library lacks the rare first edition. Dr Michael Loewe’s magnificent gift is, therefore, particularly welcome. 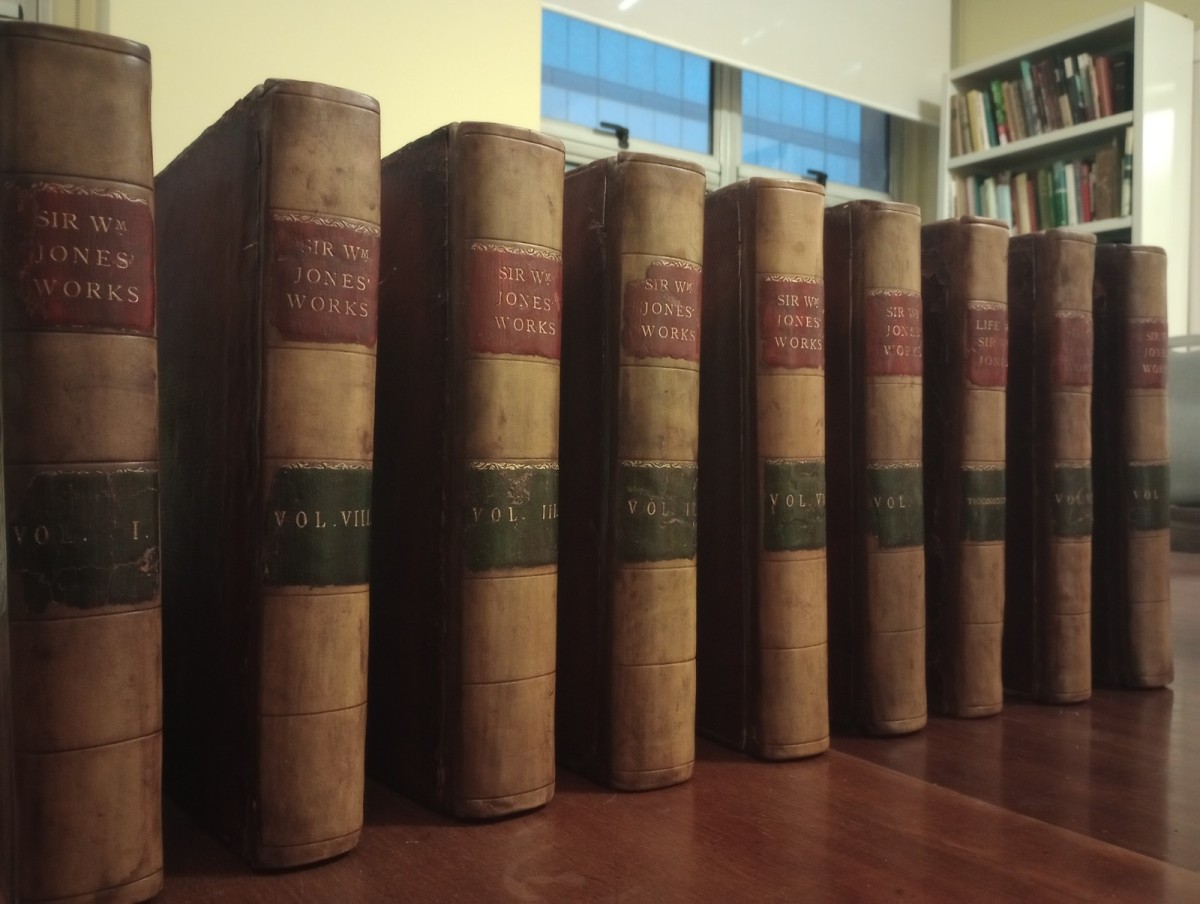 Michael inherited this set of books from his father, Herbert Loewe (1882-1940), a distinguished scholar of Semitic languages and Jewish culture. Herbert, who had graduated from Queens’ College, Cambridge, was successively lecturer at Exeter College, Oxford and from 1931 until his death, Reader (ie senior research professor) in Rabbinics at the University of Cambridge. During the First World War he was sent to India to assist with handling supplies. He became fascinated by India (and did much work on Jewish communities in South Asia which has, alas, been lost) and in 1931 became a Fellow of the RAS. Michael remembers the Journal coming into their home in Cambridge and noting that although the content then was overwhelmingly Indian in its subject matter it was eagerly read by his father, though far as it was from his own main intellectual interests.

To mark Dr Loewe’s very generous donation and to celebrate the legacy of Sir William Jones, the Society will formally receive the Collected Works on Thursday 12 January 2023 – the start of the Anniversary Year – at 6.30pm. Professor Javed Majeed FBA (King’s College, London) will deliver a lecture on Jones and his contribution to scholarship. All are welcome.