It is with great sadness that we report the death of Bruce Wannell in York from pancreatic cancer. Bruce Wannell, a long-standing member of the Society, was an expert on Islamic mysticism and  fluent in Arabic, Persian and Urdu as well as several European languages. He worked as a translator and researcher for William Dalrymple  who dedicated his book, White Mughals, to Wannell. Dalrymple described Bruce in a recent Tweet as ‘translator, traveller, perfectionist, Persianist, pianist, singer, aesthete, eccentric genius, lover of music and musicians, and the kindest and naughtiest and funniest of men’.

Bruce attended Wellington College and read Modern Languages at Oriel College, Oxford, but later grew interested in the Iranian and Islamic world, living and traveling in Iran and Afghanistan for several years.  We offer our condolences to his family and friends at this time.

THE BAYLY PRIZE 2020 HAS LAUNCHED

We are now accepting applications for The Bayly Prize 2020, a £2500 award for a distinguished thesis in an Asian subject falling within the scope of the Journal of the Royal Asiatic Society or of Modern Asian Studies. The thesis must have been examined and approved for the PhD degree at a British University in 2019. The date of the final approval letter must fall between 1st January and 31st December 2019.  Full details are available here. 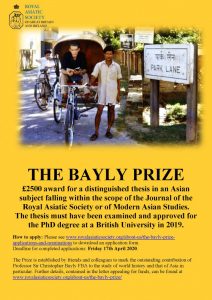 One of the projects I am currently working on is the care and cataloguing of some writings of Francis Buchanan-Hamilton. Dr Francis Buchanan, later known as Francis Hamilton or Francis Buchanan-Hamilton, was a Scottish physician who made significant contributions towards our understanding in geography, botany and zoology while living in India. He was born at Bardowie, Scotland, and studied medicine at the University of Edinburgh, graduating in 1783. He also studied botany. He first served on merchant ships to Asia and then joined the Bengal Medical Service in 1794. Buchanan’s training was ideal as a surgeon naturalist for a political mission to the Kingdom of Ava in Burma under Captain Symes (as replacement for the previously appointed surgeon Peter Cochrane). The Ava mission set sail on the Sea Horse and passed the Andaman Islands, Pegu, and Ava before returning to Calcutta. Subsequently Buchanan-Hamilton was asked to survey South India. He conducted a survey of Mysore in 1800 and a survey of Bengal from 1807-1814.

For the survey of Bengal he was asked to report on topography, history, antiquities, the condition of the inhabitants, religion, natural productions (particularly fisheries, forests, mines, and quarries), agriculture (covering vegetables, implements, manure, floods, domestic animals, fences, farms, and landed property), fine and common arts, and commerce (exports and imports, weights and measures, and conveyance of goods). His conclusions were made into a series of reports.

It is these reports that make up the majority of the archives with which I am working. The material consists of 15 bound volumes and some loose papers. The volumes are the Statistical Surveys of the Districts of Puraniya, Gorakhpur, Behar & Patna, Shahabad, Dinajpur, Bhagalpur, and Runggopur, most of which take up two volumes, Runggopur having 3 volumes. 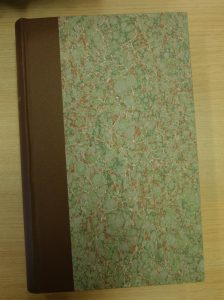 As you can see from the photographs above these are not small volumes. Each measures approximately 35 cm x 21 cm and are between 5-7 cm thick. This particular volume has 868 pages within it which is fairly average for the volumes. Though the bindings in very good condition with a note inside one of them about rebinding being undertaken in the 1990s, unfortunately, it seems, the pages were not cleaned when the volumes were rebound and have marked smoke particle accumulation. So I have quite a task ahead of me to use smoke sponges to clean up the volumes and improve their condition for future researchers.

My task might be quite large, but that pales into insignificance in comparison to the original composition and writing of these volumes. 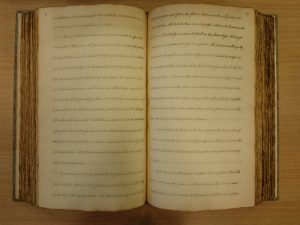 As you can see from the photograph, the pages are all neatly handwritten. I think this is probably not Buchanan-Hamilton’s own handwriting. A few volumes show a different hand and within the handwritten “Catalogue of English Manuscripts in the RAS”, dating back to the early days of the Society, there is a note to say that these manuscript copies were “deposited in the Library of the Society, for the use of the Members, by the liberality of the Hon. Court of Directors of the East India Company”. And the volumes are stamped with East India Company stamps. However Buchanan-Hamilton must have originally composed and written by hand these documents and, if these are copies, the copyist must have laboured for hours over them. I cannot guess at the number of hours of work that must have gone into creating them. It makes cleaning and cataloguing of them worthwhile, not just for their contents, which give an incredibly detailed description of each area, but also out of respect for the time spent creating them. So, if you have a report, essay, paper, or even a PhD to complete at the moment, and are feeling the strain of getting words on to a computer, take a moment to reflect on those who had to do all their reports by hand.

I couldn’t write this blog post without remarking that today (January 31st) marks the anniversary of the birth of Dame Freya Stark, born on this day in 1893 in Paris where her parents were studying art. Freya lived a long and adventurous life, dying aged 100 in May 1993. Her portrait by Paul Asyhford Methuen, created c.1934, is one of my favourite portraits at the Society. So, I couldn’t resist the opportunity to show it here.

And finally a message from the editorial team of the Journal:

“To all readers of the Journal, the editorial office would like to reassure readers that they can now read our 29.4 issue of the JRAS online at Cambridgejournal.org.  Printed copies will be distributed in the near future.”