There are two packages left in Miscellaneous Box M. The first when opened reveals a manuscript – it is made of paper but set out like a palm leaf manuscript and housed between two wooden boards, one of which has the unsatisfactory label “Tibetan; apparently not catalogued. Chinese Room”. Looking in our guard book which dates to the 1970-80s I find a similar entry: “A palm leaf format ms in paper – about 23 folios (doesn’t appear to be on any printed list or have any description).”

Our Tibetan manuscript collection was first catalogued by H. Wenzel in 1892, though some work has been undertaken more recently by an English academic to list some of the manuscripts on to the online catalogue. Reading through Wenzel’s catalogue, this one doesn’t fit any of the descriptions on it. Someone, at some point, has obviously spent some time with the manuscript as there are English annotations, but whether these belong to the original donor or to a later researcher is unknown.

For this item, I therefore needed specialist help, both in terms of care of the manuscript – it is fragile and dirty, beyond my basic preservation skills – and in its identification. I contacted Dr Philip Denwood, Research Associate at SOAS and Tibetan expert,  and within the hour he had kindly sent his reply:

“This manuscript is certainly not in the Tibetan script.  It looks to me like a rather cursive form of the Vartula script, a variant of the Rañjanā script derived from Brahmi, sometimes used by Tibetans to write mantras, but mainly by the Newars of the Kathmandu Valley to write their language and Sanskrit.  The annotations look like cursive roman script.  I would show it to an expert on Indian/Nepalese scripts.”

I felt a little foolish as I had failed to mention in my email that I thought it was Tibetan because of its label! So I then needed to begin the hunt for an Indian/Nepalese script expert and I was fortunate at the conference (for which this talk was first prepared) to find one. Camillo Formigatti, John Clay Sanskrit Librarian at the Bodleian Library, suggested that I send him some more images of the manuscript which might help him to identify it. This I did and he replied:

“As far as I can judge from the images, it is a paper manuscript of a work called Tattvālokasevanā (?) or something similar, probably belonging to the Kālacakra Tantric tradition. It was written by a certain Rāmadatta. The script is hooked Nepālākṣara or Bhujimmol, if you prefer. I’m not sure though that it’s original, as the paper looks strange to me. Could it be a copy made by or for a Western scholar, for instance B. H. Hodgson?”

Hurray! We now have some idea of the identity of the manuscript. It will take further detective work to try to trace how it came into the Society. Anybody up for that challenge?

The last package reveals not one but 12 items, all images of inscriptions. 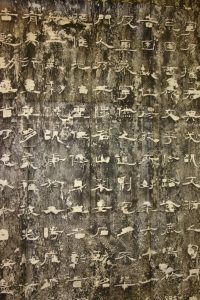 With the inscriptions is a label:  “From HALAMB – Burmese material”. I was immediately concerned by this label because:

So far, not much help. I decided to try one of our methods of accessing “expert” help. I tweeted a couple of images… This has often been a great way of identifying items or certainly gaining more information about them. The replies come back:

Do I trust these responses?  The people who posted the replies seem a mixture of expert and not. Certainly, our inscriptions seem similar to online descriptions and photographs of the stele. I have yet to find any evidence of when they might have been donated to the Society. So for now, they will be added to Special Collections with the label “probably inscriptions of the stele etc..”

So, Miscellaneous Box M has proved to be a mixed box with material ranging in country of origin from China to India to Russia to England, and in type of material from manuscript to plaster cast, from inscription to detailed map. All the items have raised questions concerning what they are and how to catalogue them. It has been an interesting journey sorting this material and discovering some of its history. Many of the items which have been highlighted in these blogs will be available to see at our  next RAS Collections Open Evening on Tuesday 21 November at 6.30pm. The event will feature talks highlighting different aspects of the RAS Collections, and a display of some of the intriguing material in our Collections. Please RSVP to Amy Riach on ar[at]royalasiaticsociety.org if you would like to come.

Before this Open Evening we have several other events at the RAS including two in the forthcoming week. On Tuesday 24th October, Professor Francis Robinson, Marion Molteno and Dr Rakhshanda Jalil will launch the  Ralph Russell Anthology of Urdu Literature, A Thousand Yearnings: A Book of  Urdu Poetry & Prose.  This book  is a new edition of Ralph Russell’s translations, a personal selection  from two centuries of Urdu literature  – stories, essays, anecdotes, poetry, and extracts from an early novel. It contains a new introduction by Marion Molteno about his special contribution to Urdu literature studies. We hope you will join us for this special event, commencing at 6.30 pm. 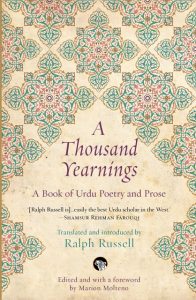 On Thursday 26th October at 6.30 pm, we welcome Dr Yuka Kadoi who will talk on “Arthur Upham Pope and A New Survey of Persian Art”. Dr Kadoi recently edited a book of that name in which fourteen scholars explore the legacy of Arthur Upham Pope (1881–1969) by tracing the formation of Persian art scholarship and connoisseurship during the twentieth century. Widely considered as a self-made scholar, curator, and entrepreneur, Pope was credited for establishing the basis of what we now categorize broadly as Persian art. His unrivalled professional achievement, together with his personal charisma, influenced the way in which many scholars and collectors worldwide came to understand the art, architecture and material culture of the Persian world. This ultimately resulted in the establishment of the aesthetic criteria for assessing the importance of cultural remains from modern-day Iran. We are delighted that Dr Kadoi will be able to share some of the insights from this book. 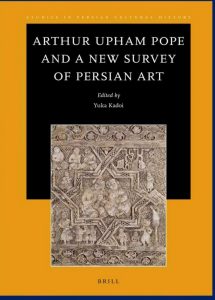 Please do join us at these lectures, and at our other events through the coming weeks. A full calendar of events is available on the website.