Three weeks ago, I wrote concerning the Papers of the Gibb Memorial Trust, particularly their association with Cambridge and the difficulties the Trust faced during World War II. You may remember I wrote about their stock being moved from Luton, as their publishers’ building had been requisitioned by the government, and it being stored in the boathouses at Newnham. With my limited knowledge of Cambridge, I had associated Newnham with Newnham College. I didn’t know that an area of Cambridge is also called Newnham.

Thanks to the public nature of a blog post, I soon learnt differently. Dr Gordon Johnson contacted me to express his surprise about the boathouses of Newnham College; the college not being near the river. However he didn’t leave his musings there. He then undertook some research, using sources available to him under lockdown, to try to discover the possible location of the boathouses where the stock might have been stored.

He explains that despite extensive research online, reading in books he has at home and contacting colleagues who are more expert in local history and the Press than himself, he did not found hard evidence as to where the Trust’s stock was lodged. But he continues:

However, I’m now certain that the stock did not go to the Newnham College Boathouse – the College was allowed to share the Jesus College boathouse, which is miles away where the river has swung east, and the left bank, where all the boathouses are, is only accessible from Chesterton. But I think I’ve found enough extra evidence to satisfy myself that my original hunch is correct – the storage would have been near the then Press Printing House (of Cambridge University Press) in the Mill Lane/Silver Street area at the location of the Mill Pool, which used to be a major industrial and commercial area of the town, with coal and grain the main commodities traded there, and paper could come in and printed sheets go out, by barges, for the University Press. Until 1928 there was an active flour mill, which then moved to near the station, and just a little upstream lay the Newnham Mill, and beyond that the Grantchester Mill. All this then developed in the 20th century as picturesque tourist trade.

The industrial activity had essentially come to an end by mid-19th century as rail and road networks were developed, and from 1884 George Darwin, second son of Charles, began to take over the properties on the Newnham side of the Silver Street bridge (the Old Granary and The Hermitage) and effectively ‘gentrify’ them, creating a lovely house and gardens (the latter on islands in the water meadow) around the perimeter of the Mill Pool. These now form the core of Darwin College.

The books, Period Piece: A Cambridge Childhood (Faber, 1952) written by George Darwin’s daughter, Gwen (an artist/woodcut printer, married to Jacques Raverat) and A House by the River (private circulation, 1976) by her younger sister, Margaret (married to Geoffrey Keynes) feature this area. A House by the River, a splendid book about the site, its houses, and history, traces the history of the site from before the Darwin family occupancy to the creation of Darwin College. It would be nice to think that the Gibb books were stored in the boathouse of that property, but Margaret does note that it did flood occasionally ‘then the boat inside floats up and bumps about against the walls…’ But there would have been other places where the books could have been stored safely.

On the town side of the Silver Street bridge the Cambridge Scudamore family had established a boat building and punting outfit at the end of Mill Lane/Silver Street. In addition, just across from the Press in Mill Lane was the Eaden Lilley depository – the warehouse for supporting their department store in the town, also from where they ran a funeral service. I think it probable that space was easily available in these, less romantic locations, though, being on the town side of the river Scudamore’s would not have been in Newnham, so a slight mystery remains as to the precise location of the Gibb stock! Gwen Raverat makes it quite explicit in her book that only once you crossed the Silver Street bridge you were in Newnham. 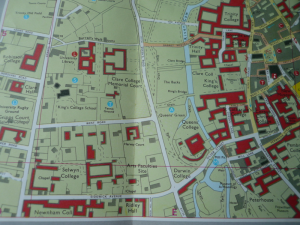 The illustration above, is from fairly recent Ordnance Survey detail of the area: Cambridge University Press occupied virtually all of the site between Mill Lane, Trumpington Street, and Silver Street. Scudamore’s boat business was at the end of Mill Lane and they operated from the riverside between the Mill and the Anchor pubs and also above the weir along Granta Place.

Staying literary, this area also features in Jim Kelly’s most recent ‘mystery’, The Mathematical Bridge (2019), a rather good and well-plotted murder and espionage story set in wartime Cambridge, January 1940.

In addition to using books at home, I’ve had rewarding email exchanges with Dr Gillian Sutherland (historian at Newnham College), David McKitterick, and Mike Petty (who sent wonderful links to the Cambridge Collection, accessible online). Also Michael Loewe (a current Fellow, 98 this coming November), who was a schoolboy in Cambridge before and during the early part of the war, reminded me about the Eaden Lilley depository.

Having received all this information from Dr Johnson, I returned to my catalogue. On putting in the search term “Mill Lane”, it revealed three responses:

GMT/3/3/3: Letter from C.A. Storey to W.L. Raynes to inform Raynes of his visit to Cox & Allen’s premises where he saw the brasses on their plates. He writes that they do not all seem to be present. He then went with the senior Binder to the stock in the Mill Lane boathouse and found various of the volumes that were needed.

GMT/3/3/32: Copy of a postcard sent by C.A. Storey to give instructions regarding folding, gathering, collating and sewing certain Volumes with the remaining flat sheets returned to the store at Mill Lane.

GMT/3/4/1: Letter from C.A. Storey to W.L. Raynes in which he informs that Heffer have received the Persian facsimiles but he is not sure about the ‘odd parcels’ from Dow & Lester. They were not at Mill Lane when Storey checked the previous day. He asks Raynes to inform him of their whereabouts.

Correspondence also reveals the material was definitely put into the care of the University Press:

GMT/2/2/9: Letter from W.L. Raynes, Clerk to the Trust, to C.A. Storey to send cheques for Cambridge University Press, Dow & Lester Ltd., and Finbow & Sons for Storey to sign. He informs that the University Press will charge £10 for unloading and storing the Trust’s stock.

The name Scudamore’s ran a bell in my memory. I seemed to remember seeing it when I had been cataloguing but the name could not be found within the actual catalogue. I returned to the Papers and eventually found in GMT/3/4/22, a letter from C.A. Storey, to the Trust’s administrator, W.L. Raynes:

“Consequently in the case of some of the volumes wanted by Luzac the sheets sent to the binders will be somewhat bulky and it will be necessary for a van to be sent to Scudamore’s boathouse in Mill Lane.”

So, it would seem, combining all this research, that the University Press were using Scudamore’s boathouse in Mill Lane to store their stock during the 1940s and, at that time, W.L. Raynes and Charles Ambrose Storey, both Cambridge residents, considered Mill Lane to be part of Newnham. My thanks go to Dr Gordon Johnson in undertaking the research to help clarify the location.

In other news, we are pleased to announce that the Royal Asiatic Society, in conjunction with the British Council, Georgia, will be holding a Zoom talk, Education and Cultural landscape in Georgia – current challenges and priorities, by Zaza Purtseladze, Director, South Caucasus (Armenia, Azerbaijan and Georgia), British Council, with Maya Darchia, (Arts) and Tamuna Kvachadze (Education and English).

The talk followed by Q&A will take place on Tuesday, 26th May at 2.00 p.m. (London), 5.00pm (Tbilisi). If you would like to participate, please RSVP to Alison Ohta e-mail: ao@t-creative.com and we will provide you with the Zoom link and password.

We would be delighted if you would join us for this event.