On this day, 29th November, in 1835, the Empress Dowager Cixi was born.  She was a formidable woman who, for a good part of her 73 years, held considerable power in Imperial China as both consort and empress dowager. I will not go into the details of her life (well worth looking up) but being the archivist here, I was intrigued to discover what materials we held about her within our Collections.

The earliest item which I thought we had of her is a photograph, mounted on a piece of card, with a label on the reverse. However on re-reading the label, I realised that it stated “Empress Dowager Tsai-An 1900”. Now here is some confusion.

The Empress Dowager Ci’an was officially designated Empress in 1852 and put in charge of the emperor’s harem. Thus her status was greater than that of the Empress Dowager Cixi while the emperor was alive. However Ci’an remind childless whereas Cixi provided the emperor with a son. So it would seem, from the label, that this is a picture of Ci’an, However, there is a problem with that – for Ci’an died in 1881!

So I turned to other sources within our Collections to try to clarify the issue. Firstly I looked at “China under the Empress Dowager” by J.O.P. Bland and E. Backhouse. 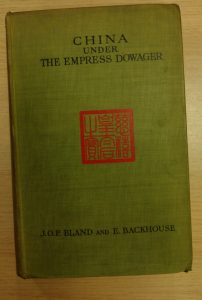 This book was published in 1910, just two years after the death of Empress Dowager Cixi and for some years was the main source of information concerning the Empress in the western world. Fortunately for me, it also contains some plates portraying her.

This image forms the frontispiece of the book, taken just 3 years after the previous image (if the other is correctly dated).

This plate is opposite p.482, so near the end of the volume, but seems to represent a younger Empress Dowager, and one most like the photograph within our Collections. However since I have no other image of the Empress Dowager Ci’an, I’ll choose not to make any conclusions concerning the identity of the Empress in the photograph in our Collections, especially as most of the images are of the Empresses in courtly costume. I’m sure further research could resolve this issue, but for now, I’ll leave you with the mystery.

And more mystery afoot. A quick Google of the author E. Backhouse, reveals him as Sir Edmund Backhouse (1873-1944), a Sinologist and linguist, who spent considerable time in China. However, that same internet search reveals that Backhouse claimed that the source for much of the book, “China under the Empress Dowager”, was a diary of the high court official Ching-shan, which Backhouse had found in the house of its recently deceased author when he occupied it after the Boxer Uprising in 1900. This source material was both upheld and discredited by scholars as being authentic, but in 1991, Lo Hui-min published a definitive proof of its fraudulence. The other author, John Otway Percy Bland (1863-1945), was a British writer and journalist, best known as the author of a number of books on Chinese politics and history. He lived in China for most of the period 1883–1910. It would appear that Backhouse provided the source material and Bland crafted it into readable prose. Were both culpable in the fraud or did Backhouse convince Bland of the authenticity of the material?

We have one further item connected with the Empress Dowager Cixi: 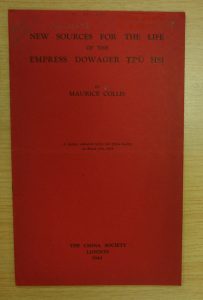 This is the text of a lecture delivered before the China Society in London, on 21 March 1944. Its author, Maurice Stewart Collis (1889 – 1 1973) was an administrator in Burma from 1912-1934 and afterwards a writer on China, Southeast Asia and other historical subjects. He begins this lecture, “New Sources for the Life of the Empress Dowager Tz’ŭ Hsi” by reminding his audience of a play that he had published in 1943 entitled, “The Motherly and Auspicious”, the title being a translation of Tz’ŭ Hsi. It appears that Backhouse had been questioning the sources that Collis had used! So within the lecture, Collis sets out to detail his sources, and goes to some lengths to establish the authenticity of some of them. He also points out that many of these sources were unavailable at the time of the Bland and Backhouse book.

So, it seems, that not only was the Dowager Empress Cixi a plotter and schemer, so also was at least one of her biographers. Perhaps that is a fitting tribute to her!

On a completely different theme, but still staying with China, on Tuesday 10 December, 6.30pm, we welcome Dr George Mak (Hong Kong Baptist University) to lecture on “The Mandarin Union Version after One Hundred Years: A Reflection on the History and Impact of a Classic Chinese Biblical Translation”.

And later that week, on Thursday 12 December, also at 6.30pm, we welcome Dr Peter Coles (Morus Londinium and Goldsmiths University) for the launch of his book, “Silk, Syrup and Shade: 4000 years of Mulberry Migrations”. We hope that many of you will be able to attend these events.