SC1 – Chinese Documents on Trade Regulations with the English

Within our Special Collections are a set of three documents written in Chinese dating to the early nineteenth century. These have been catalogued on to Archives Hub. But this has only been possible due to the work of Dr Fu Yang who translated the documents into modern Chinese and then provided English abstracts. These are provided below.

Negotiations for the language (terminologies) to be used between foreign traders and the Qing government. Generally,  foreigners do not know Chinese perfectly but based on a meeting we had with Mr. John Fullerton Elphinstone (1778-1854) today, they would like to learn to speak and write Chinese, therefore, we should follow up inquiries from foreigners and allow them to do so. Their official letters should be sealed with the foreign company’s chop.

On matters of local official letters where the words man and yi were used, whether these two words convey meanings of scorn and insult.

I checked:  man and yi are two words in the title for all foreign countries. In the south they are called man and in the west they are called yi which is the same as the people living in the central plains called Han [Chinese].  It is the only term [used] for a title, which do not [contain] scorn and insult meanings any longer. Macau belongs with Xiangshan province, people come from different countries to trade there.  Local officers are in charge of negotiations for different matters. They should [pay attention to] words or sentences which cause delay of trade.

[On the matter of] local officers should inform [any] action before the arrival [of these foreign traders].

[On the matter of] could police officer stop sampan drives by foreign traders to customs.

I have checked: since [Qing government] allowed foreign trade [in China] [also authorized] [their sampan] return to customs in case of any inquiry. Police officers check [that] the boats travelling in and out comply with customs policy. [We should] check and compare this case to old policy to avoid trouble.

[On the matter of] a foreign bushiness coming to Canton [who are] required to employ local people as porters [and] guards, [there are] hundreds of people [which would be] employed. If foreign traders [only] employ foreign [labours] this may cause problems with local labours.

I have checked: The Thirteen Factories and Macau companies usually employ porters, guards, servants, cooks and buyers which are essential and could increase. [We should] based on the policy of allowing the employment [of locals]. The only exception is a personal assistant.  Shawen is not included in this regulation which should be rejected based on the old regulation.

[On the matter of] These escort ships and warships moored in chuanbi xiaoyi lingding [and] jijing waters (ports) [which are] based [there] for the purpose of catching the wind [for departure], please apply old regulation authorising compradors[1] [to these ships].

I have checked: There are specific bays for the mooring of these escort ships which accompany trading ships to Canton. On the third month of tenth years of Jiaqin reign (April 1798) the local leader and Governor-General Viceroy orders were reported and recorded [this matter]. [Therefore] we should refer to the old regulation in dealing [with this matter]. [However] if the escort ship arrived with the cargo ship they should depart with cargo ship.

After a cargo ship has left [port], inspection of the ship on the high seas[2] may cause protest from other foreign traders. [We should] according to regulation, allow authorised British ships as escort ship to come in and go out with cargo ship. Before [British] cargo ships leave, [we could] authorise a comprador. Based on the old [version] regulation, if a cargo ship has already left [Qing border], these inspection ships cannot stay on the high seas.

[On the matter of] [When British] cargo ships moor in territorial waters [and] escort ships remain on the high seas [that] require a sampan[3] to communicate [with each other], the policy is to not stop [sampan] please.

I have checked: sampan used by guard ships or sampans used by cargo ships are difficult to distinguish from one another.  Only way is to search for any contraband or illegal goods  carried by the sampan. In future, when British cargo ships arrive into territorial waters, if [they need to use] a sampan to deliver a message, the sampans staying in territorial waters should go to Provincial Hall or Huangpu Hall to report and check; the sampan staying on the high seas should go to Hengdang Taxations Hall to report and check. If the sampan do not have weapons nor smuggled goods then Taxations Hall should authorize a pass. The Qing warship [and] artillery battery nearby should let sampan pass and not stop them. If the sampan is carrying violation things then [Qing government] should reject the authorization pass.

[On the matter of] A few days ago, a Hong Kong cargo ship [which had] already received a red pass [which allowed them to depart to the high seas], however [our] warship opened fire [on the Hong Kong cargo ship]. Please make a regulation to avoid this in future.

[On the matter of] the United States and Britain having trouble with each other, if a British cargo ship can be looted by American. Please stop Americans selling the looted British goods.

I checked: cargo ships of different nationalities coming to Canton should bring the authorized certificates from their country. When ships arrive in Wanshan, the inspector should check and examine the ship and its cargo.  After confirming the sources of the goods, the ships should go to Macau to report arrival, then leave to Humen to check and report, [at last] arriving in  Huangpu. It is an old regulation which had been followed for a long period. Through inspection, if it is a cargo ship and authorized by their country, [which] can be confirmed, [we should] not make any trouble that could cause problems. That does not relate to the special care rules from our great emperor. We should deal with this matter based on old regulation.

We are not sure on the matter of whether or not there are arguments between foreign countries. We should not in future discuss. I, Fu and Pang explained all the details above to George Thomas Staunton. All foreign heads fully understand and thanked us for  the explanations [to them]. [All foreign traders] are waiting for future instruction. The trade between China and foreign countries [has been for a] long period, in my opinion, it is impossible not to check the old regulations, [however] the old regulation needs to change when [we face a new] situation. There are some other things to inquire about and to report by end of this letter:

[On the matter of] the British report written in Chinese with special care for our great emperor, for convenient purpose, we shall allow [British business reports to be] written in English? [On the matter of] British business confidential reports are important. These general reports should please be delivered to the closest office. All foreign business coming to Canton shall be managed by Customs.  If the business is related to a different region, the business in Macau is managed by the Xiangshan province; the one in Huangpu is managed by Fanyu and Jiaotang to check, inspection or management should be done in the most convenient way.

Only British cargo ships have escort ships [Royal Naval escorts] which can be checked by [Chinese] artillery battery and warships at any time. Their sampans should report to Taxation Hall [upon arrival], then authorised to pass. We should treat this foreign business with respect. British senior business executive Mr. John Fullerton Elphinstone is authorised by the King of Great Britain. All the reports from him should be treated in the same way as reports from inland, [you] should not show [special] favour [for him]. All foreign business reports should be judged to see [whether] the matter is worth reporting or not, but not if the cargo hold has been opened. Even if there is a delay, it is their responsibility. [We] should not investigate. By doing it this way, the complaints could stop.

[2] That is, international waters, not territorial seas.

An  investigaton into a court case that merchants sold opium at high sea in the nineteenth year of Jiaqing reign (1814). Based on a statement from Chinese merchants:

When they heard that the Andolini cargo ship would depart, they chased and stopped Andolini on high sea and asked for the unpaid money. Andolini didn’t have any silver but only could borrow opium from another cargo ship to pay his debt. Under this circumstance, those merchants accepted the opium and then sold it to other ships or cargo ships on the high sea and did not keep record buyer’s details. We decided to confiscate that money to government. Trade in opium is a serious criminal offence in China, thus these merchants should be locked in jail for a month and then sent to the frontier as soldiers.

Based on this case, we should send notification to all foreign companies; and ban Andolini’s business in China in future. If any foreign business smuggles opium into China there will be a serious charge penalty. In future, when foreign cargo arrives in China, custom should inquire for a list of goods. Only allow the ship to unload goods after checking and confirming the lists. In addition, we must clarify the system of reward and punishment required to regulate the law.

SC1/3 – This document is in three sections.

British warships entered internal Chinese waters triggering a series of investigations regarding foreign businesses in the Canton area. The local government, based on Jiaqing period law, rules that there are two issues pertaining to foreign business, which included architectural forms of foreign shops, and prohibiting all locals from contacting with or working for foreigners or foreign business without government approval.

Through his investigations, the local commander also found certain compradors, who represented the Chinese government, negotiated business with and borrowed funds from, foreign businesses.  Additionally, a number of compradors were not properly qualified to handle the position.  Of these compradors, Youdu Pan, whilst already retired, continued to received profit distributions as part of his income. The government ordered Youdu Pan to return to work to serve his country in this difficult time. 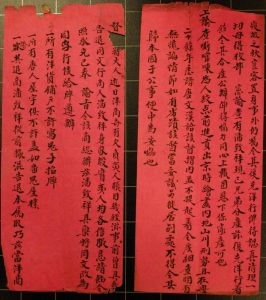 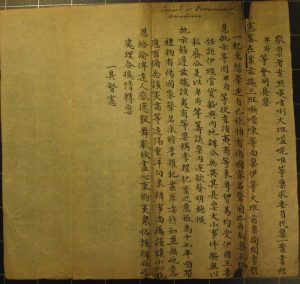