Last evening, Thursday 9th May, the Society held its Anniversary General Meeting, celebrating 196 years of its existence. President Anthony Stockwell opened the proceedings before handing over to Treasurer, Lionel Knight, to give his report.

The Treasurer went through the accounts of the Society, mentioning some of the financial activities in more detail, particularly the current campaign to raise funds to conserve the Burmese braid (Do please consider contributing to this worthwhile cause). Then followed the President’s report in which he highlighted the many achievements of the Society in the past year, particularly among its publications, its Journal, its series of Lectures and other events, and the researchers making use of our Collections. He spoke about the inauguration of the Bayly Prize, in commemoration of Professor Christopher Bayly, and praised both the generosity of the donors and the standard of the candidates entering for the prize.

His address was followed by the Election of Officers and Council Members. Dr Barbara Brend will continue as Vice-President and Mr Lionel Knight as Treasurer. Mr Derek Davis and Dr Gordon Johnson will return to the Council, joined by Dr Norbert Peabody and Mrs Elizabeth Robb.

The Meeting was followed by a lecture by Professor Jonathan Phillips of Royal Holloway, University of London. His lecture was entitled, “‘Saladin, we have returned!’: The Myriad Memories of the Crusades in the Near East during the Modern Era” in which he spoke of the many ways in which Saladin has been characterized and mythologized in both Eastern and Western context within the Modern Era.

In the picture he is seen in front of one of his slides, showing a modern Malaysian animated cartoon series, “Saladin the hero who became a legend” which has won major animation awards. His lecture was followed by a lively question and answer series.

With Professor Phillips mentioning so many ways in which Saladin has been portrayed, I was interested to see what we held in our Collections. We have several more recent publications about his life but I also found this book dating to 1755. 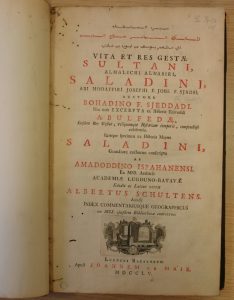 The book was presented to the Society by Lady Chambers on 18 February 1832 and it is a Latin-Arabic history. 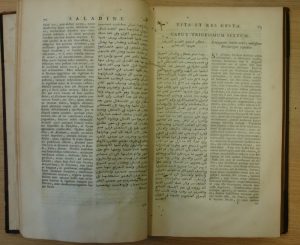 So, if you wish to learn more about Saladin and can read Latin or Arabic, do come and take a look at this volume in our Reading Room. Or if English is your preferred language, Professor Phillips has recently published, “The Life and Legend of the Sultan Saladin” containing all his research on the topic.

Next week on Monday 13th May, there is a special event when award-winning researcher and food writer, Nawal Nasrallah, will give an exclusive talk at the Royal Asiatic Society on the subject of her translation of Kanz al-fawāʾid fī tanwīʿ al-mawāʾid, a fourteenth-century Egyptian cookbook, entitled Treasure Trove of Benefits and Variety at the Table. This will be followed by a tasting session. This is a ticketed event, £15 for members and £20 for non-members, which are available from the Society.