On Monday 13th May, Nawal Nasrallah,  introduced by Professor Doris Behrens Abouseif, provided a fascinating and entertaining introduction to her translation of a 14th century Egyptian cookbook entitled Treasure Trove of Benefits and Variety at the Table (Brill, 2019) for which only 5 manuscripts survive. As Nawal noted, this compendium, which includes recipes not only for a variety of foods but also drinks, including a ‘foamy beer’, toothpicks, perfumed powders and the preserving of fruit, was drawn from contemporary cookbooks, perfumer’s recipes and medical treatises. This manuscript, translated so very expertly into English by Nawal, describes Egyptian cooking before the advent of the tomato. It contains 23 chapters with a total of 750 recipes. The manuscript provides 11 recipes for himmas kassa, the precursor of what we know and eat today in copious quantities as hummus bi tahini.  As well as describing the recipes Nawal also discussed the utensils including the mifrak; a wooden hand blender or mixer whose use dates from the 3rd century BC in Egypt and is still found today in local markets.

Following the lecture, we were invited to try out 5 recipes that had been prepared from the book and there was universal agreement that 14th century Mamluk cuisine was delicious. I include a recipe below for himmas kassa which was very popular with the guests. The recipe is taken from the book Treasure Trove of Benefits and Variety at the Table (Brill, 2019), pp.650-1.

¼ teaspoon each of caraway, coriander, black pepper, ginger, and cinnamon, all crushed

A quarter of a salted lemon in small pieces

Put all the ingredients, except the salted lemon, in a food processor and pulse the mixture until smooth. Mix until it looks green, add more herbs if needed. The consistency should be thick enough to pick up with a piece of bread. Add a little more lemon juice if needed.  Fold in the chopped salted lemon. To serve, spread on a plate and drizzle a generous amount of olive oil over it, garnish it with chopped parsley and a light sprinkle of cinnamon and rose petals if you like.

Nawal Nasrallah is a noted translator of medieval Arab cookery manuals. She has published books and articles on the history and culture of Arab food including Annals of the Caliphs’ Kitchens Ibn Sayyar al-Warraq’s 10th century Baghdadi Cookbook (Brill 2007), Treasure Trove of Benefits and Variety at the table, a 14th century Egyptian Cookbook (Brill, 2019) and Delights from the Garden of Eden on contemporary Iraqi cookery (Equinox, 2013).

I am grateful to Dr Ohta for providing the first part of the blog this week. I was unable to be at the event as I was launching my latest poetry collection on the same evening. The Gospel of Trickster is published by Hercules Editions who say this about the book:

“Hercules Editions, a London-based independent poetry press, is pleased to be able to bring this exciting new book to life. Nancy Charley’s audacious poem is accompanied by specially-commissioned drawings from artist Alison Gill, which are inspired by children’s Bibles, gaming culture and fairy tales. The images and poem together stress the sometimes dark, sometimes playful nature of this retelling of the Gospel story for modern times”. 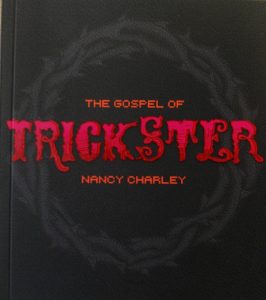 The book features the poems alongside several commissioned illustrations by Alison Gill and an afterword by journalist Sophia Deboick, in a limited edition of 300 signed copies. If you would like to find out more about the book, or maybe purchase one, either contact me here at the Society or go to Hercules Editions’ website.

Our next event at the Society, on Tuesday 21 May, 6.30pm, will be a lecture by Cheryl Porter, Director of the Montefiascone Project. She will be talking about her conservation work in her lecture, “Painting manuscripts with metals and insects: Grind or flatten, catch and cook”. We hope many of you will be able to join us.