On 16 June, the Society was pleased to host a celebration to mark the acquisition of a new painting, a gift to the Society from Professor Francis Robinson. The painting, Conversation piece by Louise Riley Smith, depicts, from the left moving clockwise, four Presidents of the Royal Asiatic Society: Gordon Johnson, Peter Robb, Tony Stockwell, and Francis Robinson, with the Society’s Director, Alison Ohta, in the central position. 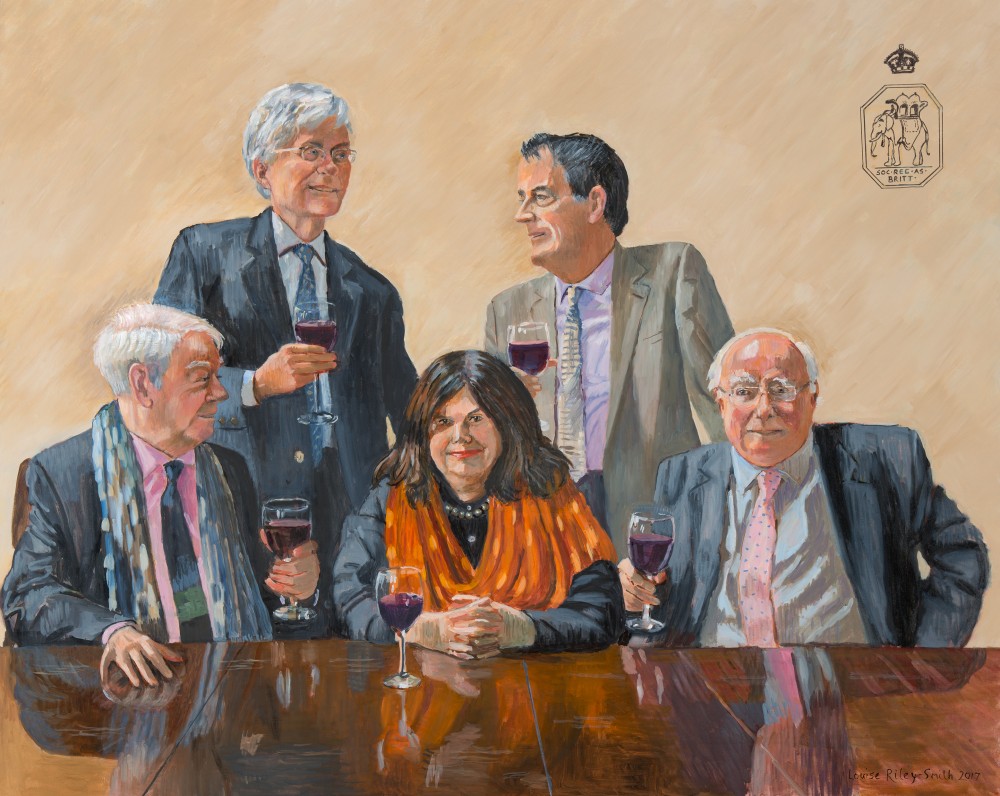 As he explained at the painting’s unveiling, the idea for commissioning the painting as a celebration came to Francis Robinson as he reflected on how the Society had changed since he first became President in 1997. Then, the Society was placed in a rather unsuitable building in Queen’s Gardens, Lancaster Gate. Its library had to be kept on open shelves, exposing rare and valuable works to the risk of theft. It was not possible to let space to achieve extra income. Lancaster Gate, moreover, was a long way from London’s university quarter around Bloomsbury. The Society’s activities consisted of eight lectures a year, the odd conference, a modestly successful journal, and self-published books.  Financially the Society struggled to break even. Indeed, to do so it had recently sold some Farquhar drawings.

Change began with the appointment of Kit Naylor as Hon. Treasurer, Sarah Ansari as the editor of the Journal, Alison Ohta as Curator (later Director), and a decision only to publish in future through a publishing house. Things moved forward following a report into the future of the Society commissioned when Tony Stockwell was President, which recommended that the Society sell Queen’s Gardens and move to a more suitable property in London’s university quarter.  After a search which ranged from the Strand to the Angel, a property was found, an old Victorian engineering building, in Stephenson Way close to Euston Station. A brilliant vision of how the property might be renovated to suit the Society’s purposes by the late Anthony Feldman enabled Council to persuade the Fellowship to sell Queen’s Gardens and move to a renovated Stephenson’s Way.

Francis noted that following the move, the leadership of Tony Stockwell, Gordon Johnson and Peter Robb, alongside the energy and imagination of Alison Ohta, have enabled the Society to flourish. All the Society’s space is made to work for its living, yielding a good rental income. Lectures, book launches and cultural events take place almost every day of the week; the Society has been able to add to its archival holdings (for example, the recent purchase of the Manning Papers); it publishes 4 to 6 books a year with Routledge and major university presses; its Journal, much increased in size, is snapping at the heels of its rivals; and most important it now balances its books.  All this is good news as the Society looks to celebrate its bicentenary in 2023.

Professor Robinson’s gift helps capture an important period in the Society’s history. The painting is currently on display in the Society’s Lecture Theatre – if you would like to see it, please let us know.