Recently our Director, Alison Ohta, received an email from Tracey Willard, the Membership Director at the Royal Asiatic Society in Shanghai. We wanted to share, with a wider audience, their words of welcome to any members of the RAS and its related Societies who are visiting Shanghai. Here is their invitation:

“[Recently], we had the opportunity to discuss the relationship with other RAS branches… Our former Shanghai president, Spencer Doddington, and our former programme director, Susie Gordon, have both called in to the London home of RAS in recent years and enjoyed a friendly reception…. We thought now it might be good to re-establish collegial relations.

The Shanghai Branch of RAS is currently enjoying a well recognised place in the ex-patriate community, largely due to the efforts of our active and dedicated council. RAS Shanghai offers a vibrant programme of talks and activities to our members and guests throughout the year. We have also just made arrangements to move the RAS library to a prestigious and historical location on the Bund, in the former headquarters of the old British trading firm Jardine Matheson, and look forward to the library’s formal opening in autumn.

We would welcome any members from other RAS branches as honorary members if they are visiting Shanghai. They would be welcome to attend any of our events and also access the library’s resources.”

So, if any members of the Society find themselves in Shanghai, please take the opportunity to meet with like-minded individuals in the Shanghai Branch of the RAS.

Such an message always make me curious to look in the archives for older material. We do, of course, have copies of the Journal of the North–China Branch of the Royal Asiatic Society from 1864-1948. However, I am currently sorting the RAS Institutional Archives into categories, one of which is Allied Societies. So, I was interested to find out what else I have uncovered. 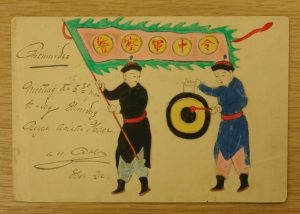 This postcard was  sent from Shanghai to John Calvin Ferguson (1866-1945), American Chinese Art Collector, and a Member of North China Branch of RAS. He was indeed President in 1911. Here is the reverse side of it: 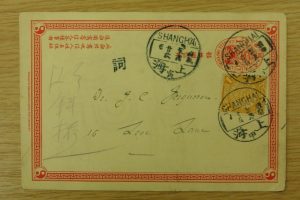 This gives us some more clues as to the provenance. In a reply to a  tweet  some months ago, Helen Wang, Curator of East Asian Money, British Museum, suggested that the postcard dated from after 1898 as this was when the design of 1 cent stamp was introduced. The message informs of a meeting on that day at 5.30 pm and is signed by the Hon Secretary of the North China Branch. What a colourful way to receive notification of a Meeting. I wonder if this is typical of the communications of the period or whether the then Honorary Secretary had an artistic bent?

Some of the other material is more sobering. In 1952, the Secretary of the RAS in London received a letter from the Vice-President of the North China branch announcing its closure. 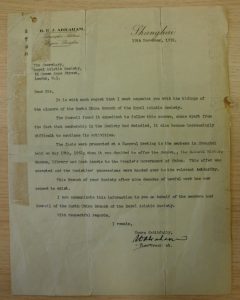 He announces that at a General Meeting held on May 19th 1952, it was decided to “offer the Society, its Natural History Museum, Library and Cash Assets to the People’s Government of China. This offer was accepted and the Societies’ possessions were handed over to the relevant Authority.”

This marked the demise of the North China Branch for a while. Several researchers over time asked for information. Here is a typical request and response dating from the 1990s: 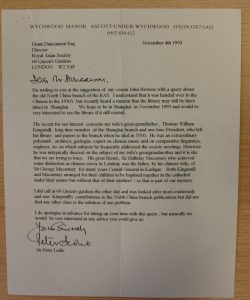 This letter is from Sir Peter Leslie, enquiring about his wife’s ancestor, Thomas William Kingsmill, who had been a member of the Shanghai Branch and one time President. Kingsmill had left his papers and library to the Branch on his death in 1901 and so Sir Leslie was wondering if there was any chance of finding them. Here is the reply from D.J. Duncanson, Director of the RAS:

Duncanson states the former address of the North China Branch and informs them that the Hong Kong Branch had been set up in 1959 in succession, at the initiative of Shanghai’s former Secretary, J.R. Jones, with Duncanson himself as Secretary. However Jones had brought no records with him to Hong Kong.

Such records make it a pleasure to know that the RAS returned to China in 2006 when a branch was established in Hangzhou. Its activities were transferred to Shanghai in early 2007 and in September that year, under the name of The RAS China in Shanghai, it formally reconvened the activities of the North China Branch of the RAS. We are  delighted to receive the welcome above and to hear of the re-opening of the library. May RAS China in Shanghai go from strength to strength.