About the Society, Portraits, RAS Collections

Earlier this summer, the Society was honoured to accept the donation of a portrait of Professor E.H.S. Simmonds (1919-1994). The painting is by his wife, Patricia Simmonds (1923-2018), an actress and painter whose work was exhibited in the Royal Academy Summer Exhibition. The portrait of Professor Simmonds (who was known as Stuart) once hung in his office at SOAS, during the years when he played a central role leading the work of the Royal Asiatic Society. The portrait is a fitting addition to the Society’s collections, and is currently on display in our Lecture Theatre. 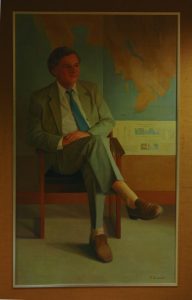 Stuart Simmonds spent his academic career at SOAS, where he worked from 1948 until retiring in 1982 from the position of Professor of the Languages and Literatures of South East Asia. He became a Fellow of the Royal Asiatic Society in 1954, and was elected to Council in 1962. Stuart Simmonds played a pivotal role in the Society from the mid-1960s until 1980: he served as Director from 1965-8, as President from 1973-6, and had two terms as Vice-President, from 1968-72 and from 1976-80. . Stuart Simmonds is credited with key part in establishing the study of Tai languages, literature and culture in Britain at the university level. His contribution to Thai studies was acknowledged in 1988 when the King of Thailand appointed him Commander of the Most Exalted Order of the White Elephant.

Born in Sussex in 1919, Stuart joined the Royal Horse Artillery which commissioned him in 1940. Stationed in South-East Asia, he was among those captured by Japanese forces in 1942 after the surrender of Singapore. Stuart spent the next four years as a prisoner of war, for the most part in the labour camps of the infamous Burma railway in Western Thailand, where the death rate among the 30,000 British prisoners has been estimated at around one quarter. It was in these conditions that Stuart began to pick up some familiarity with the Thai language and the ways of the local people. After the war ended, Stuart pursued his university education at Keble College, Oxford, but was soon led by his interest in the Thai people and culture to a position at SOAS. Stuart played a key role in driving forward the study of Tai language and literature, first at SOAS and then in British universities more widely, and conducted several research trips to Thailand, including, after his marriage, with his wife, Patricia.

In addition to the portrait, we are grateful for the donation of a collection of photographs and biographical material that help document Stuart’s career. By preserving and making accessible this material, we hope to help ensure that the legacy of this remarkable man and his life’s work will be kept alive. This is mainly material collected by his wife on his death – letters of condolence, obituaries and biographies, momentoes from the funeral and memorial services, and a copy of a memorial lecture given in his honour. But there are also  photographs relating to his time in South-East Asia and a copy of the plan he made of the Japanese prison-of-war camp in which he was interned. This material has been sorted and housed in archival packaging but it is not yet catalogued. Being just one archival box, it would make an ideal project for a volunteer. So if you are interested in finding out more about Stuart Simmonds, and particularly how he was viewed in the wider community, then please consider volunteering to catalogue these papers.

But as is the way when working with archives, a set of papers I have recently catalogued also features Stuart Simmonds. In 1973, the Royal Asiatic Society celebrated its 150th anniversary and the catalogue for this material is now available on Archives Hub. During much of the preparation time Basil Robinson, Keeper at the Victoria & Albert Museum, was President of the Society. But in 1973 the presidency passed to Stuart Simmonds and so he presided over the many events that constituted the Society’s celebrations. A quick look at the catalogue will give you an idea of the breadth of the events. These included:

The Sesquicentenary Dinner was held at the Merchant Taylors’ Hall. Here are the printed menu and toast card: 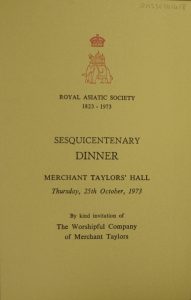 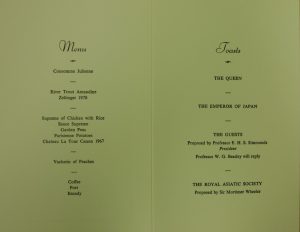 We also have the seating plan for the dinner. There are two versions but this is the updated one: 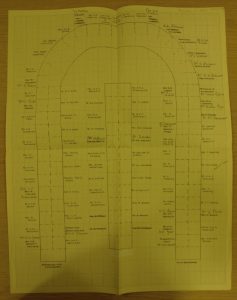 A photograph of Professor and Mrs Simmonds with the Japanese Ambassador is also in the Collection:

And there is also a picture of all the guests at the Dinner which features, in the middle at the front, one Dr. Barbara Brend, our current Vice-President.

These papers are a treasure trove for anybody wishing to research the Society in this period. And Simmonds, too, played his part in documenting the Society’s history.  Alongside Simon Digby, Stuart Simmonds edited The Royal Asiatic Society: Its History and Treasures; commissioned for the Sesquicentenary and published in 1979, this volume is a treasure trove of information about the history of the Society and its possessions. It remains one of the chief sources of published information about the Society to this very day 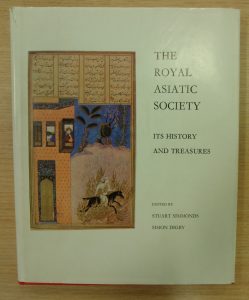 As we begin to plan towards the 200th celebrations, it is good to have these records to look back on for inspiration, and to know who to honour within the Society’s history. We are very pleased to have as part of our collections the portrait of Professor Simmonds who played such a pivotal role at this time.