I have spent much of the summer months sorting through institutional records, applying retention schedules to make sense of which records need to be kept for both current and archival purposes. It has been good to work with the Executive Officer to begin to streamline our record-keeping in its transfer from office to archive. I am also very grateful for the purchase of a new efficient shredder which has made the disposal of duplicate and unneeded records much easier. All this helps to make sure that the Society is keeping up with the latest Data Protection Regulations and that we will have the records that researchers will come looking for in future years.

It is necessary and satisfying work, but not necessarily the most inspiring. So alongside these records, every now and then, I dive into our Special Collections to do some cataloguing. This week I went looking into Special Collections Box 42 and found Grammaire Tagalog. 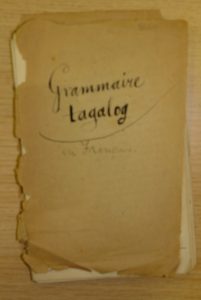 This is a small collection comprising of the above notebook, another handwritten manuscript, a letter, the original envelope and two labels. And the labels proved very helpful in identifying the work: 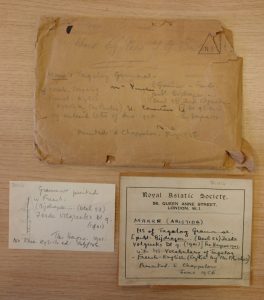 Grammaire Tagalog  is the work of Eugène Aristide Marre, a French linguist, born in 1823. He was long-living, surviving to 1918 (age 95) and in that time produced many publications on both mathematics and languages. He worked on Madagascan and South-East Asian languages, Tagalog being a language from the Philippines, and his Grammaire Tagalog was published in 1901. 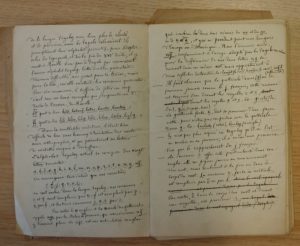 The version within this collection is a handwritten manuscript with corrections and it forms the first of two works, the second being Vocabulaire tagalog-francais-anglais. 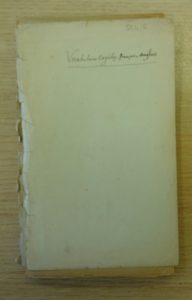 This is written in two different hands and the accompanying letter explains that Mrs Pinches has added the English vocabulary to the manuscript. Those who know something about the history of the Society will recognise the name Pinches as the medallists who for many years produced the Society’s medals. This Mrs Pinches was not part of that family but was the wife of Theophilus Goldridge Pinches. T.G. Pinches was the youngest brother of the medallists, Thomas Ryan Pinches and John Pinches.  He worked as Assistant in the Department of Egyptian and Assyrian Antiquities at the British Museum, from 1878 to 1900, and thereafter as Lecturer in Assyrian at University College, London. In his Obituary in the Journal of the Royal Asiatic Society, 1934, written by Reginald Campbell-Thompson, it describes how T.G. Pinches was an expert in cuneiform, having first begum learning when he was 19 years old, and that he worked with Sir Henry Rawlinson in the publication of Western Asiatic Inscriptions and Cuneiform Texts from Babylonian Tablets. His wife, Isabelle, was the daughter of Auguste Bertin de Veaux, a French general and politician, and therefore suitably linguistically able to undertake the French-English component of the Vocabulary. 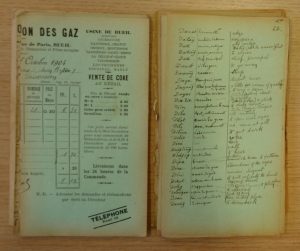 As you will see from the photograph, the vocabulary has all been composed on the back of French gas bills! These date from 1900 to 1906 and so give some idea of when the work was undertaken. The letter with the manuscripts also helps in the dating of the material. It was written on 26 August 1908 to a prospective publisher. 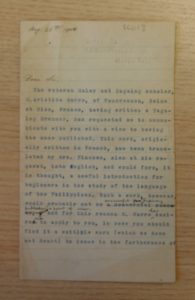 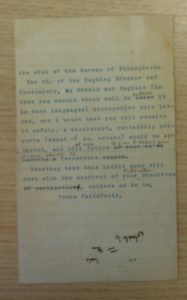 It is unsigned but the nature of the letter and the address of “Sippar House”, Sippar being an ancient Near Eastern Sumerian city, would suggest that it is written by T.G. Pinches. He explains that he is writing at the request of Aristide Marre, that the translation has been undertaken by Mrs Pinches, and that he believes the work would be a useful introduction for beginners in the study of language of the Philippines. I have not been able to find out whether this work was ever published. So, if you know…

The material was presented to the Royal Asiatic Society in 1956 by Mrs E. Chappelow. She was probably the widow of Eric Barry Wilfred Chappelow, a noted poet and World War I conscientious objector who died in 1957 and brother of A. C. Chappelow. Both Chappelows seem to have been Pinches’ students and Eric contributed articles on Assyriological topics to the Journal of the Royal Asiatic Society. According to the British Museum catalogue, Pinches’s personal collection of Mesopotamian cuneiform tablets was bequeathed to A.C. Chappelow and in part sold to the British Museum by Chappelow’s widow, the remainder being sold at Sotheby’s. It also seems that Eric Chappelow bought at least one of Pinches’ books from Bernard Quaritch. Maybe miscellaneous papers came into the hands of both brothers and Mrs. Chappelow decided that they would be best housed at the Royal Asiatic Society. The catalogue for the Papers is now available on Archives Hub.

So now it’s on to the next item from Box 42 – this is Orders of Chapters of the Qur’an by “Muhammed Bāgir, a native of the town of Bawānāt” – another handwritten manuscript. Perhaps more on that on another blog…