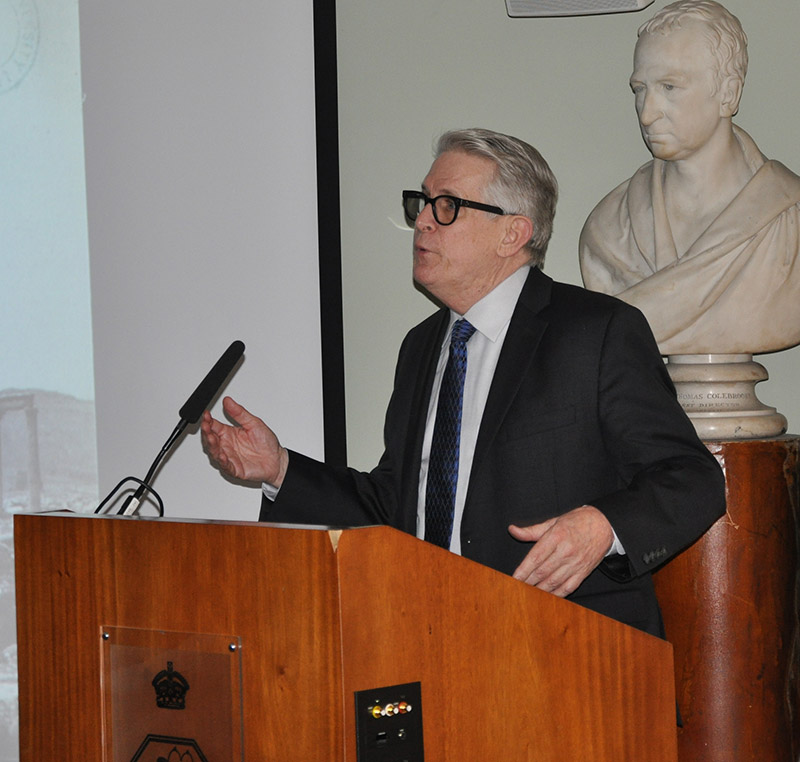 Professor Ousterhout’s focus was on the the career of John Henry Haynes and the part he played in the Wolfe Expedition of 1885. He noted their astonishment upon coming on the ruins at Palmyra as they journeyed back from Mesopotamia and how Haynes looked to capture the site in an aesthetic manner. He outlined the rest of Haynes remarkable career and the lack of recognition for Haynes within his own lifetime.

As Professor Ousterhout mentioned, Palmyra has been a source of attraction to European travellers since the 17th century. I decided to discover whether we had other accounts concerning Palmyra…

Not surprisingly, one of the first I came across was that of Richard Burton who journeyed “Through Syria to Palmyra” in 1870, fifteen years before the Wolfe Expedition. He wrote about this journey in the final chapter of “Wandering in Three Continents”, published posthumously in 1901. 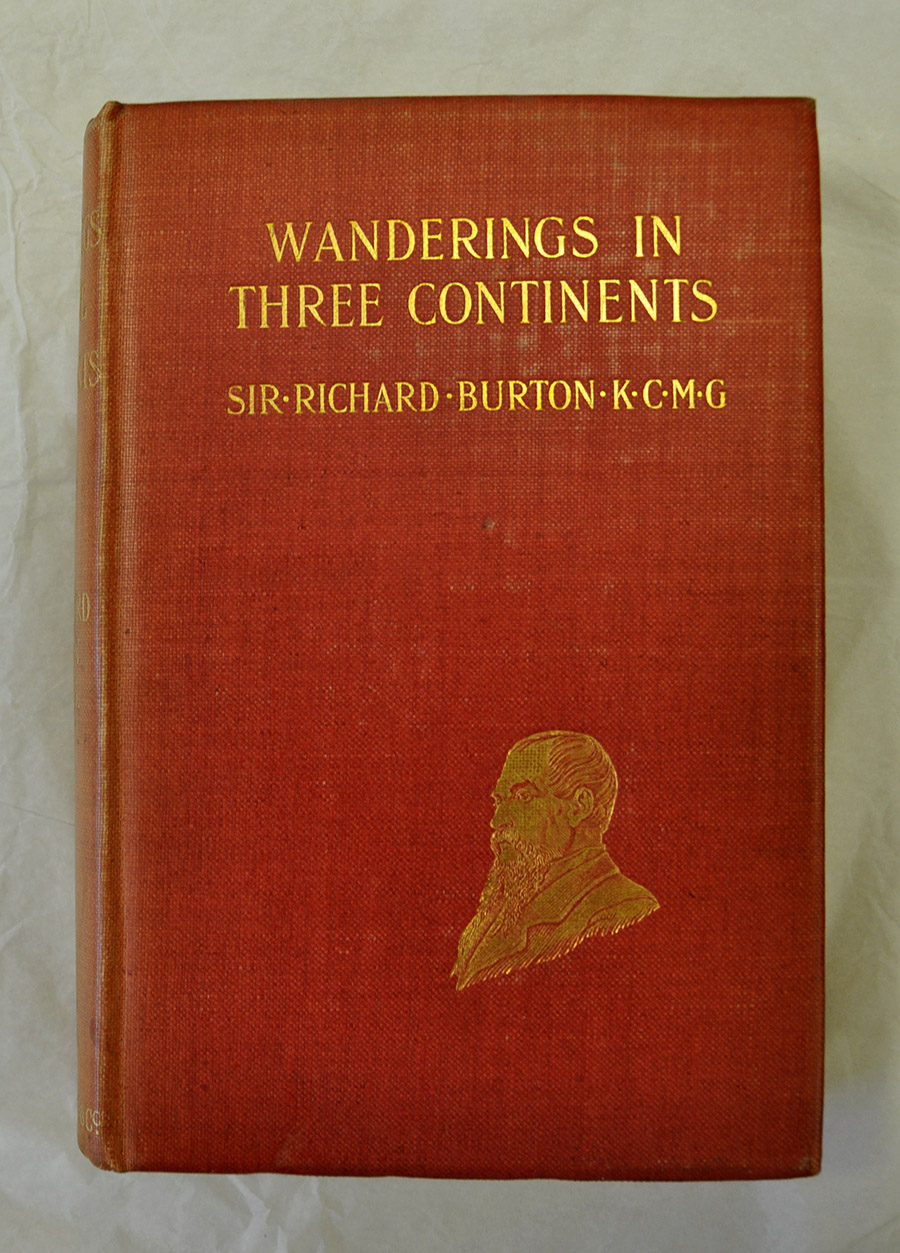 This book covers Burton’s explorations in “El Medinah & Meccah”, “Harar”, “To the Heart of Africa”, “The City of the Mormons”, “A Mission to Dahome” “A Trip up the Congo”, “The Interior of Brazil” and “Through Syria to Palmyra”. It is edited and prefaced by William Henry Wilkins, a biographer who wrote his own biography of Isabel Burton but also helped edit Isabel’s biography of Richard Burton. 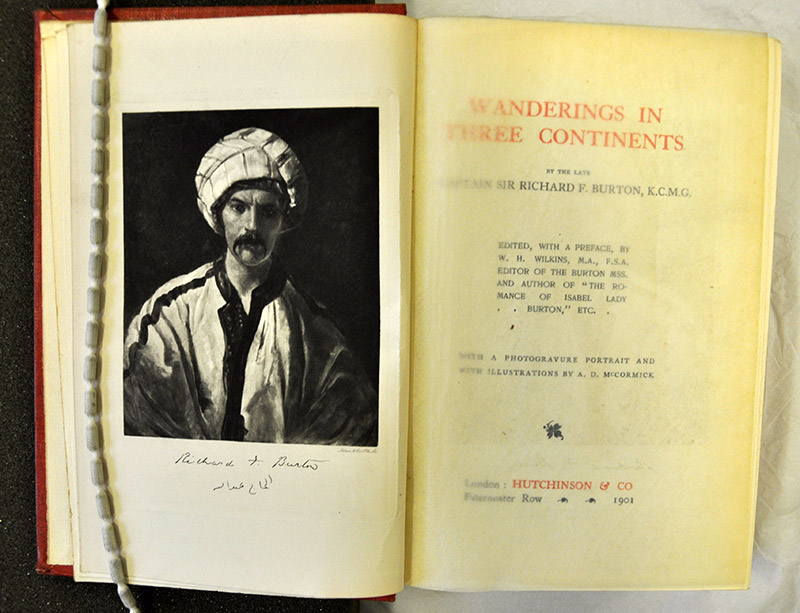 In the chapter Burton writes concerning Palmyra, “If asked whether Palmyra is worth all this trouble, I should reply “No” and “Yes”. No, if you go there, stay two days, and return…. Yes, if you would study the site and the environs…”. He then continues to describe Palmyra:

“The site of Palmyra is very interesting: she stands between the mountains and the sea; like Damascus, she sits upon the eastern slope of the Anti-Libanus, facing the wilderness, but unhappily she has a dry torrent bed, the Wady el Sayl, instead of a rushing Barada. She is built upon the shore cape, where the sandy sea breaks upon its nearest headlands, This sea if the mysterious Wilderness of the Euphrates, whose ships are camels, whose yachts are high-bred mares, and whose cock-boats are mules and asses. She is on the very threshold of the mountains, which the wild cavalry cannot scour, as they do the level plain.”

What mostly interested Burton were the three “tomb-towers”. He writes: “The people call them Kasr el Zaynah (Pretty Palace), Kasr el Azin (Palace of the Maiden), and Kasr el Arus (Palace of the Bride). The number four or five stories, but the staircases, which run up the thickness of the walls, are broken, and so are the monolithic slabs which form the lower floors. Explorers, therefore, must take with them ropes and hooks, ladders which reach to eighty feet, planks to act as bridges, and a short crowbar. I have little doubt that the upper stories would be found to contain bone, coins, and pottery, perhaps entire mummies”.

Burton, himself spent only a day and a half on excavation. at a group of tomb-towers west-south-west of the Temple of the Sun. His men discover two oval slabs of limestone, each with its “kit-cat in high relief. One was a man with straight features, short, curly beard, and hair disposed, as appears to have been the fashion for both sexes, in three circular rolls. The other was a feminine bust, with features of a type so exaggerated as to resemble the negro.” He suggests these finds provided great excitement in the area.

An even earlier expedition was undertaken by the Reverend J.L. Porter which he wrote about in his two volume work, “Five Years in Damascus: Including an Account of the History, Topography, and Antiquities of the City; with Travels and Researches in Palmyra, Lebanon and the Hauran”. This was published in 1855. 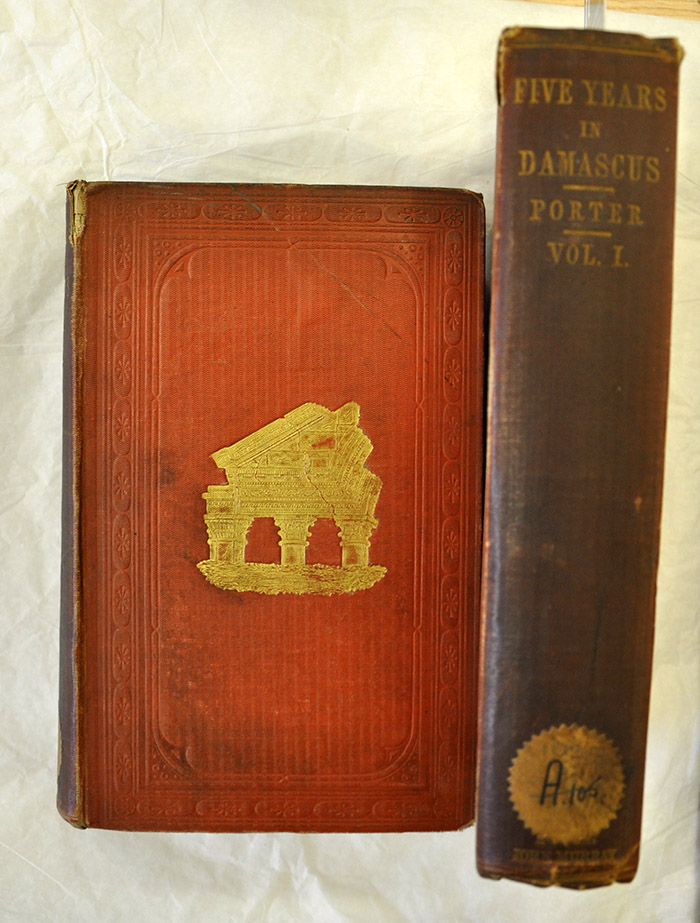 In his preface, Porter claimed that much of his travels were through areas little traversed by others before and that the maps and drawings within the volumes are by his own hand and from his own observations. About Palmyra, he states, “A romantic  interest will be attached to Palmyra; the desert home of Zenobia, while history exists”. The books are written as a journal of Porter’s travels and he reached Palmyra in April 1851. He writes:

“The traveller from the west generally approaches the ruins through the break in the mountains, and the first object that attracts his attention is the old Saracenic castle that crowns an isolated peak some distance on the left. On each side of the road he observes numbers of strange tower-like tombs – some nearly perfect and others confused heaps of ruins – built in the valley and along the slopes above. After passing most of these he surmounts an easy swell. and the whole panorama of the ruins opens up at once before him. They stretch from the base of the mountains across the valley on the left till they are terminated by the the lofty walls of the magnificent Temple of the Sun directly in front. He is struck with astonishment at their cast extent, and no less so at their utter desolation. They are white as snow-wreaths, and not a tree, or shrub, or blade of grass, or solitary weed is seen among them! Heaps of massive stones, noble porticos, and long and beautiful colonnades, are intermixed with the shattered ruins if temples, and triumphal arches, and proud monuments erected in honour of the mighty dead. There is no sign of life – all is bare and desolate as a deserted cemetery.”

Rev. Porter did not have the benefit of photographs, but continues to give a very detailed description of Palmyra, including some small illustrations and a “Plan of the Ruins”. 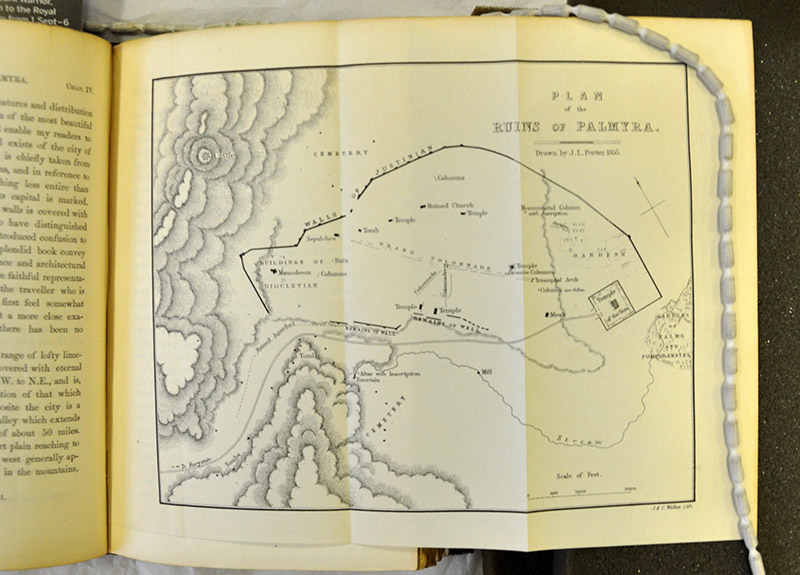 Porter sought to provide a description and history for Palmyra – as many have done since. I am grateful for Professor Ousterhout’s lecture which gave the prompt to find out both more about Palmyra, and also about some of the people who have been fascinated by the place.